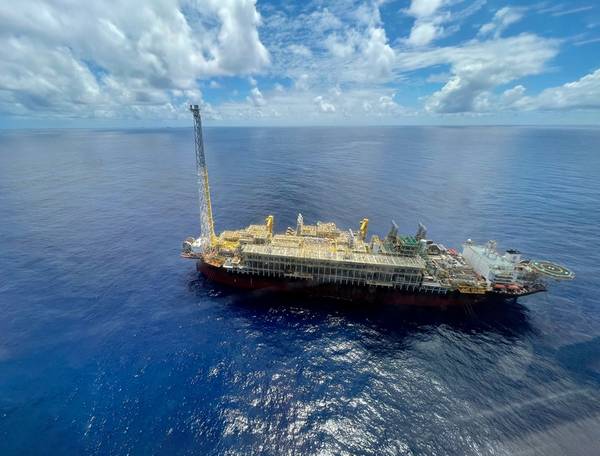 In 3Q22, Petrobras kept a solid operating performance, with average production of oil, NGL and natural gas reaching 2.64 MMboed, virtually in line with 2Q22. Results in 3Q22 fully contemplate the impacts of the production sharing contracts related to the Transfer of Rights Surplus Volumes of Atapu and Sepia – which became effective on May 2nd, resulting in a reduction of Petrobras’ work interest in these fields -, and the decommissioning and demobilization of FPSO Capixaba. These effects were partially offset by the ongoing ramp-up of FPSO Guanabara (Mero field), by the high production of FPSO P-68 (Berbigão and Sururu fields) and by the lower volumes lost to maintenance and interventions.

Given the good performance in the quarter, our forecasts for FPSO ramp-ups and new wells going online in 4Q22, we restate our expectation of reaching the production guidance for 2022 (2.6 MMboed, +/- 4%).

The highlights of 3Q22 were:

P-68 joined the set of owned units, such as P-70, in the Atapu Field, and P-74, P-75, P-76 and P-77, in the Búzios Field, which temporarily, due to operational conditions, are able to produce above their nominal capacity, an important contribution for production performance in 2022.

The FPSO, which operates in the Berbigão and Sururu fields (Santos Basin), reached full production capacity on June 21st, delivering its highest average quarterly production (148,000 bpd), confirming the good performance of the production unit and its wells. Furthermore, on October 8, the platform reached a daily production record of 161,000 barrels, above the nominal capacity due to the optimizations in the production plant, surpassing the previous daily record of 157,000 barrels, in June 2022.

In FPSO Guanabara, which is ramping up production, we connected and started up two new oil and natural gas production wells and two new gas injection wells in 3Q22. As a result, the unit reached an average production of 65,000 bpd in the quarter.

FPSO Anna Nery, contracted with Yinson, arrived at the Brasfels shipyard, in Angra dos Reis (RJ), on October 1st , for the final phase of commissioning and preliminary acceptance tests. The unit, which will have a production capacity of 70,000 barrels of oil per day, is part of the Marlim and Voador Revitalization project, which will also include FPSO Anita Garibaldi. The two FPSOs will replace nine Stationary Production Units (SPUs), including four that are currently in operation (P-18, P-19, P-20 and P-47) and five that are being decommissioned (P-26, P-32, P-33, P-35 and P-37). FPSO Anna Nery is scheduled to start operations in 2023.

FPSO Almirante Barroso, with oil processing capacity of 150,000 bpd, arrived at the Brasfels shipyard on October 5. The platform will undergo a further commissioning stage of its equipment and production systems, in addition to regulatory inspections and preliminary acceptance tests. Leased from MODEC, it will be the first chartered unit to start operating in the Búzios field, and the fifth to start production in the field, which currently is being produced by Petrobras units P-74, P-75, P-76 and P-77. The unit is scheduled to start operations in 2023.

Departure of FPSO Anita Garibaldi from Chinese shipyard to Brazil

The platform left DSIC shipyard (China) on October 6, bound for the city of Aracruz (ES), where commissioning activities, regulatory inspections and preliminary acceptance tests will be carried out.

P-71 platform left the Jurong Aracruz shipyard, in Espírito Santo, on October 15 and arrived at the Itapu field, in Santos Basin pre-salt area, on October 20. The production unit will be the sole unit deployed in the field and will have an oil processing capacity of 150,000 bpd. The unit is currently being anchored and the connection of production risers will follow. There is a possibility that the FPSO starts operating yet in December 2022, prior to the original schedule in the 22-26 Strategic Plan.

Signing of construction contracts for the FPSOs of Búzios 9, Búzios 10 and Búzios 11

As a result of the production development project for the Búzios field, in Santos Basin pre-salt area, we have awarded contracts with Keppel Shipyard Limited for the construction of P-80 and P-83 platforms, which will operate the 9th and 11th modules, and with Sembcorp Marine Rigs & Floaters for the construction of P-82, which will operate the field’s 10th module.

The FPSOs will have an oil processing capacity of 225,000 bpd and 12 million m³ of gas per day, besides a storage capacity of more than 1.6 million barrels. These are the first production units contracted for Petrobras’ High Capacity Basic Project, a new generation of Petrobras’ platforms, with high production capacity and innovative technologies to reduce carbon emissions. “Búzios is an asset with high quality oil, substantial reserves, and low carbon emissions. We are celebrating four years since the beginning of production and preparing ourselves for future challenges. The signing of the P-80, P-82 and P-83 contracts is an important milestone in the implementation of the Búzios development plan, which by the end of the decade will contribute to increase by more than three times the installed production capacity,” said Production Development Executive Director João Henrique Rittershaussen. The units are scheduled to start operations in 2026 (P-80 and P-82) and 2027 (P-83).

Petrobras rescinded the contract with SPE Kerui-Método, formerly responsible for the construction of the Natural Gas Processing Unit (NGPU) of the Itaboraí Gaslub Hub. To minimize the impacts on the start-up of the Route 3 Integrated Project, we have started the necessary procurement procedures to conclude the remaining scope of the NGPU and estimate to start gas processing operations at the complex in 2024.

With a flow and processing capacity of 21 million m³/d of natural gas from the Santos Basin pre-salt, Route 3 Integrated Project is strategic for Petrobras as it will enable the increase in the supply of natural gas to the Brazilian market.

The contract provides Petrogal access to the gas processing units owned by Petrobras located in the states of Rio de Janeiro and São Paulo, connected to the Integrated Flow System (SIE). The implementation of the SIP allows the companies producing gas in Brazil to commercialize their volumes directly to their clients. These measures are part of a set of actions that enables the diversification of agents, resulting in increased competition, in compliance with the commitments made by Petrobras to the anti-trust body (CADE) in 2019.

Conclusion of sales of E&P assets in Espírito Santo

On August 3 we farmed out from the Peroá and Cangoá production fields and from the BM-ES-21 concession, jointly called Polo Peroá. The sale was made to 3R Petroleum Offshore S.A. Petrobras held 100% stakes in the Peroá and Cangoá fields, located in shallow waters, in the Espírito Santo Basin, with average production, from January to June 2022, of about 572,000 m3/day of non-associated gas, and 100% stakes in the BM-ES-21 exploratory block, located in deep waters, in which the Malombe discovery is located.

Conclusion of sales of onshore fields in Ceará

On August 5, Petrobras sold its work interest in the Fazenda Belém and Icapuí onshore fields, known as the Fazenda Belém Pole, located in the Potiguar Basin, in the state of Ceará, to 3R Fazenda Belém S.A. The average oil production of the complex, from January to July 2022, was approximately 575 bpd.

The total utilization factor (FUT) of the refining facilities reached 88% in 3Q22, in line with 2Q22. Diesel, gasoline and jet fuel yields were 66%, same level of 2Q22. These good results were achieved even with the scheduled maintenance stoppages of 43 days in the distillation and coking units at REPLAN, the largest refinery in the country, and 33 days at REGAP’s hydrotreatment units. During this period, we excelled in the stoppages, respecting safety, environment and health requirements. REPAR’s scheduled stoppage is in progress, having started at the end of September and continuing until November. It is also worth noting that eight of our refineries have cumulative operational availability in 9M22 at the level of the best American refiners.

In September, we concluded the first sale of Diesel R5, composed of 95% petroleum-derived diesel and 5% renewable diesel with HBio technology, developed by Petrobras’ Research Center, which consists of co-processing in a hydrotreatment unit. Production was carried out at REPAR, where we had already produced Diesel R5 for testing in the urban bus fleet in Curitiba. In the batch produced in September, the sale was destined for commercial tests in order to assess the market’s response to the new fuel, an important step towards regular commercialization with higher volumes.

The consumption of Diesel R5 reduces greenhouse gas emissions, potentially avoiding the emission of 1 ton of CO2 equivalent to every 9,500 liters, approximately, compared to 100% of fossil diesel.

With demand still heated, in 3Q22 we sold 700.7 thousand tons of asphalt in the domestic market, the highest volume in a quarter since 2014. We also had a quarterly record in asphalt production since 2014, with a total of 697.5 thousand tons.

In September 2022, we carried out the largest monthly delivery of bunker in Belém and Vila do Conde since the beginning of the operation in these locations. 18,400 tons were delivered, a historical record.

We also achieved record sales of xylene in August at RPBC, the only refinery in the Petrobras system that produces this type of solvent, which is mainly used in automotive paint formulations and in pesticides. Petrobras has a significant share in the domestic solvent market, with RPBC being the main producer of this product line.

In 3Q22, we continued to work on market development for pre-salt oils, focusing on Atapu and Sépia, which were the last streams added to Petrobras’ export basket. In this quarter, 4 new customers were added, distributed among Asia, Europe and South America.

Eagle Cambé and Eagle Crato ships were added to the Petrobras fleet, the last two of the three low fuel consumption tankers (Eco Type) built to reinforce the more sustainable fleet for the relief of oil platforms operated by Petrobras. Both have a transport capacity of up to 155 thousand metric tons of crude oil and, together with the Eagle Colatina, a vessel added to the fleet in 2Q22, will contribute to the reduction of carbon emissions in maritime transport, adding operational safety, reliability and value to Petrobras offloading operations.

The first experimental night unberthing maneuver of a very large crude carrier (VLCC) at full load was carried out in October at the Angra dos Reis terminal, as established by the Brazilian Navy. The night maneuver restriction for loaded VLCCs lasted since the foundation of the terminal in 1971. The operation provided an eight-hour reduction in the berth occupancy rate of this vessel at the pier.

With the RefTOP Program, World Class Refining, which aims to increase the competitiveness of Petrobras’ refining facilities, we continue to advance towards greater energy efficiency and reduction of emissions in the refineries in São Paulo and Rio de Janeiro, in addition to better performance in the refining facilities.

The Intensity of Greenhouse Gas Emissions (IGEE) from the refineries continued to decline in 3Q22, with a result of 37.8 kgCO2e/CWT, compared to 38.9 kgCO2e/CWT in 3Q21. Energy Intensity, which measures the ratio between a refinery’s total primary energy consumption and standard energy consumption, remained stable at 107.6 in 3Q22. In the refineries that are part of the RefTOP Program (RPBC, RECAP, REPLAN, REVAP and REDUC), the result of Energy Intensity in 3Q22 was even more expressive, reaching 106.2, resulting in lower energy consumption in these 5 refineries. We also highlight the start-up, in July, of the REVAP distillation top gas recovery system, which will allow a reduction in the emission of approximately 900 t/year of SOx, and in September, of the energy optimization project of the of Coke I Unit at REPLAN, with new heat exchangers that allow greater energy recovery, leading to a reduction in natural gas consumption of around 16,000 m³/d.