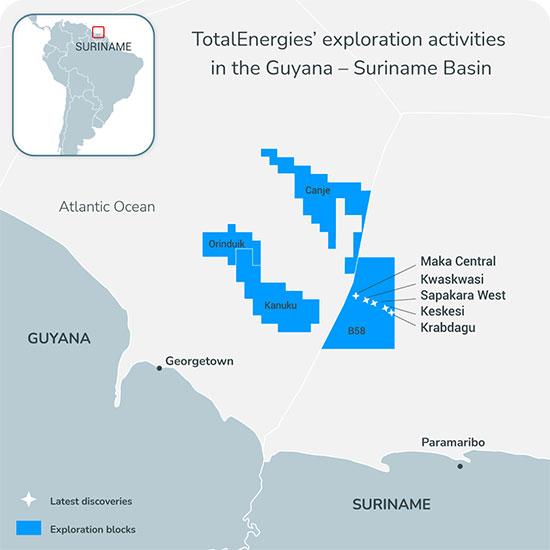 President Joe Biden’s decision to ban Russian energy imports to the U.S. is boosting the outlook for South America’s newest oil-producing nation Guyana as well as neighboring Suriname. The deeply impoverished microstates share the offshore Guyana-Suriname Basin where global energy supermajor ExxonMobil with its partners has made a slew of quality petroleum discoveries in offshore Guyana’s Stabroek Block. In 2000 the U.S. Geological Survey estimated that the offshore basin, which is one of South America’s largest, holds mean undiscovered crude oil resources totaling 15 billion barrels. There is growing evidence that the USGS may have grossly underestimated the basin’s hydrocarbon potential. This resulted in the U.S. government agency announcing it was planning to reassess the petroleum resources of the Guyana Suriname Basin in 2020, although that was put on hold because of the COVID-19 pandemic. The mounting evidence that the Guyana Suriname Basin possesses far greater potential than originally believed indicates that the geological resource will be a game-changer for two of South America’s poorest countries.

Exxon estimates its discoveries in the Stabroek Block alone hold 10 billion barrels of recoverable oil resources, which have the potential for at least 10 development projects. As a result, analysts believe Guyana will be pumping over one million barrels of crude oil daily by 2027, which will deliver a tremendous economic windfall for one of South America’s most impoverished nations. Neighboring Suriname, which shares the Guyana Suriname Basin, is also poised to benefit from an oil boom of its own. French oil supermajor TotalEnergies, which is the operator, and partner Apache both have a 50% stake in offshore Suriname Block 58 which is 1.8 million acres in size and contiguous to Exxon’s prolific Stabroek Block. The partners have reported a slew of oil discoveries since January 2020 with the latest being the February 2022 discovery at the Krabdagu-1 exploration well. This is the fifth significant oil discovery in the block and the sixth if the non-commercial November 2021 discovery at the Bonboni-1 exploration well is included. The oil found in Block 58 is characterized as medium to light crude oil with an API gravity of 25 to 43 degrees.

Those discoveries demonstrate that Block 58 possesses considerable petroleum potential with some analysts estimating that it could hold up to six billion barrels of recoverable oil resources. TotalEnergies announced that by the end of 2022 it intends to identify sufficient oil resources, through drilling three exploration and appraisal wells in Block 58, to progress investment in operations for first oil development. In a November 2021 media release, Apache announced the successful flow testing of the Sapakara South-1 appraisal well, which the driller estimated had tapped a reservoir containing 325 million to 375 million barrels of oil resources. By February 2022, Apache had revised that estimate upward to over 400 million barrels. The U.S.-based driller has allocated $200 million to conduct further exploration and appraisal activities during 2022 most of which will be directed to offshore Suriname. The planned undertakings include spudding an exploration well in Block 53, located to the immediate east of Block 58, where the Apache has a 45% interest.

The raft of discoveries in Block 58 along with Malaysian national oil company Petronas and partner Exxon discovering oil in Block 52 points to Surname’s considerable petroleum potential. There is considerable speculation among industry participants and energy analysts that the petroleum fairway which lies underneath the Stabroek Block continues into Suriname’s part of the Guyana Suriname Basin. It isn’t only deep-water blocks in offshore Suriname which possess considerable potential. The shallow waters immediately off the former Dutch colony’s coast are also thought to possess considerable hydrocarbon potential. By mid-2021, Staatsolie, Suriname’s national oil company and industry regulator, had completed a shallow water bid round.

Block 5 was awarded to Chevron while Blocks 6 and 8 went to a consortium composed of TotalEnergies (40%), Qatar Petroleum (20%), and Staatsolie (40%). In December 2021 Chevron sold a 20% stake in Block 5 to energy supermajor Shell while retaining a 40% interest with the remaining 40% held by a subsidiary of Staatsolie. CGX Resources, along with partner Frontera, January 2022 oil discovery in the shallow water Corentyne Block in offshore Guyana bodes well for the success of Suriname’s shallow-water blocks. The Corentyne Block is contiguous to Block 58 offshore Suriname as well as the shallow water blocks 5 and 6.

Analysts believe that the petroleum fairway running through the Stabroek Block extends into the northern tip of the Corentyne Block, where CGX made the Kawa-1 discovery, and into Suriname’s shallow-water blocks 6 and 8.

In a June 2021 speech, Suriname’s President Chandrikapersad Santokhi stated that his administration expected Apache and TotalEnergies to make a final investment decision regarding developing Block 48 by the end of 2022. Paramaribo anticipates that first oil from Block 58 will be produced by early as 2025 or 2026 at the latest. According to industry consultancy Rystad Energy, Suriname’s oil production will reach 650,000 barrels per day by the end of this decade. That will deliver a tremendous financial windfall for a country ranked as the fourth poorest, by per capita gross domestic product, in South America. It will also provide Paramaribo with the opportunity to not only resuscitate an economy caught in a deep crisis that was sharply exacerbated by the COVID-19 pandemic but to restructure Suriname’s onerous sovereign debt.