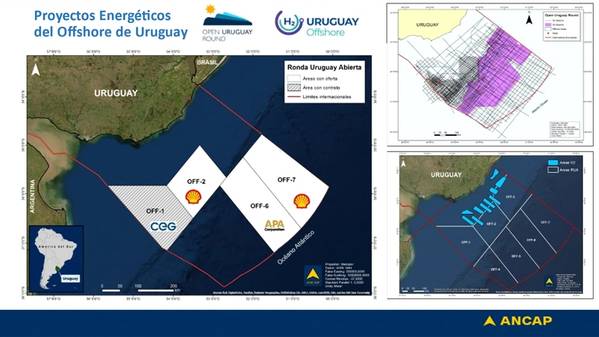 (OE) Uruguay’s ANCAP has awarded three of the six available offshore blocks on its continental shelf to Shell and Apache, following bids received in the most recent ANCAP 2022 Open Bidding Round.

The award of these three blocks is in addition to the OFF-1 block previously awarded to Challenger Energy. Of the three new blocks awarded, the OFF-2 block was the only block which received competing bids, with both Shell and APA Corporation having submitted proposals.

ANCAP has reported that the work Shell committed to undertake in relation to Block OFF-2 and Block OFF-7 in the initial 4-year exploration period includes the acquisition of new 3D seismic data.

As for the Block OFF-6, Apache has committed to drilling an exploration well during the initial four-year exploration period.

The aggregate value of work committed across blocks OFF-2, OFF-6 and OFF-7 by Shell and APA Corporation in the next 4 years, in respect of both technical and exploration activities including well drilling by APA Corporation, is stated by ANCAP to be approximately US$200 million.

Challenger Energy, which owns rights to Block OFF-1, has welcomed the news of the two major offshore exploration and production players acquiring acreage next to its offshore block.

“Challenger Energy considers the entry into Uruguay of two well regarded international companies, and the commitment by both to undertake sizeable and meaningful work programs during an initial exploration period (including 3D seismic acquisition and new well drilling), to be a highly positive development, validating both the Company’s decision to enter Uruguay in 2020 and underscoring the solid technical foundation and excellent value proposition represented by the OFF-1 block,” the company said. Shell’s Block OFF-2 is directly adjacent to Challenger’s OFF-1 block.

Challenger considers its OFF-1 licence area and the broader offshore Uruguay play system to be analogous to the recent prolific, conjugate margin discoveries made offshore Namibia by TotalEnergies (the Venus well) and Shell (the Graff well), where reported multi-billion-barrel Cretaceous turbidite reservoirs have been encountered.

“It is noted that in addition to work that will now be undertaken by Shell and APA Corporation on their Uruguayan blocks, various public statements and news releases indicate that relevant additional work and drilling activities are currently underway or being planned by multiple parties for the balance of 2022 and 2023, including additional exploration and appraisal wells being drilled in Namibia, and 3D seismic acquisition in Northern Argentina. These activities are expected to further the technical understanding of the OFF-1 block,” Challenger Energy said.