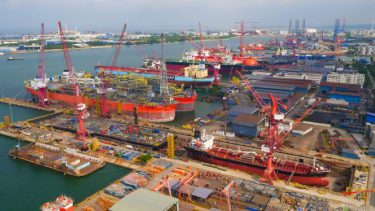 Following last year’s announcement about an agreement to explore the combination of Keppel Offshore & Marine with Sembcorp Marine, significant progress has been made in the process. However, more time and deliberation are needed to reach the final agreement to which both companies are committed.

As a reminder, the idea behind combining Keppel O&M and Sembcorp Marine, announced in June 2021, was a response to the dramatic changes in the sectors and with a view of accelerating the pivot towards new energy and decarbonization solutions.

The assumption was that the combined entity would be better positioned to capitalise on the energy transition including areas such as offshore wind and address the opportunities and challenges in the evolving and consolidating offshore & marine industry.

Now, more than nine months later, the two players have provided an update on their discussions, noting that significant progress has been made and that both remain committed to the proposed combination and are working towards a definitive agreement by 30 April 2022. The main points of progress include mutual due diligence, the transaction structure, exchange ratio and other related matters.

The two companies reiterated that, as a response to the dramatic changes in the global offshore & marine engineering and energy sectors in recent years, the objective of the proposed combination is to create a stronger combined entity, leveraging respective strengths to realise synergies and deliver sustainable value over the long term for shareholders.

However, while both are devoting considerable resources to progressing the combination, more time and deliberation will be required to complete due diligence, reach a mutual agreement on the transaction terms, and finalise definitive legal documentation.

When it comes to Keppel O&M’s planned sale of legacy completed and uncompleted rigs and associated receivables to a separate Asset Co, announced at the same time as the agreement with SembMarine, Keppel said that significant progress has been made in this aspect as well. This Asset Co transaction and the proposed combination will be inter-conditional and are being pursued concurrently.