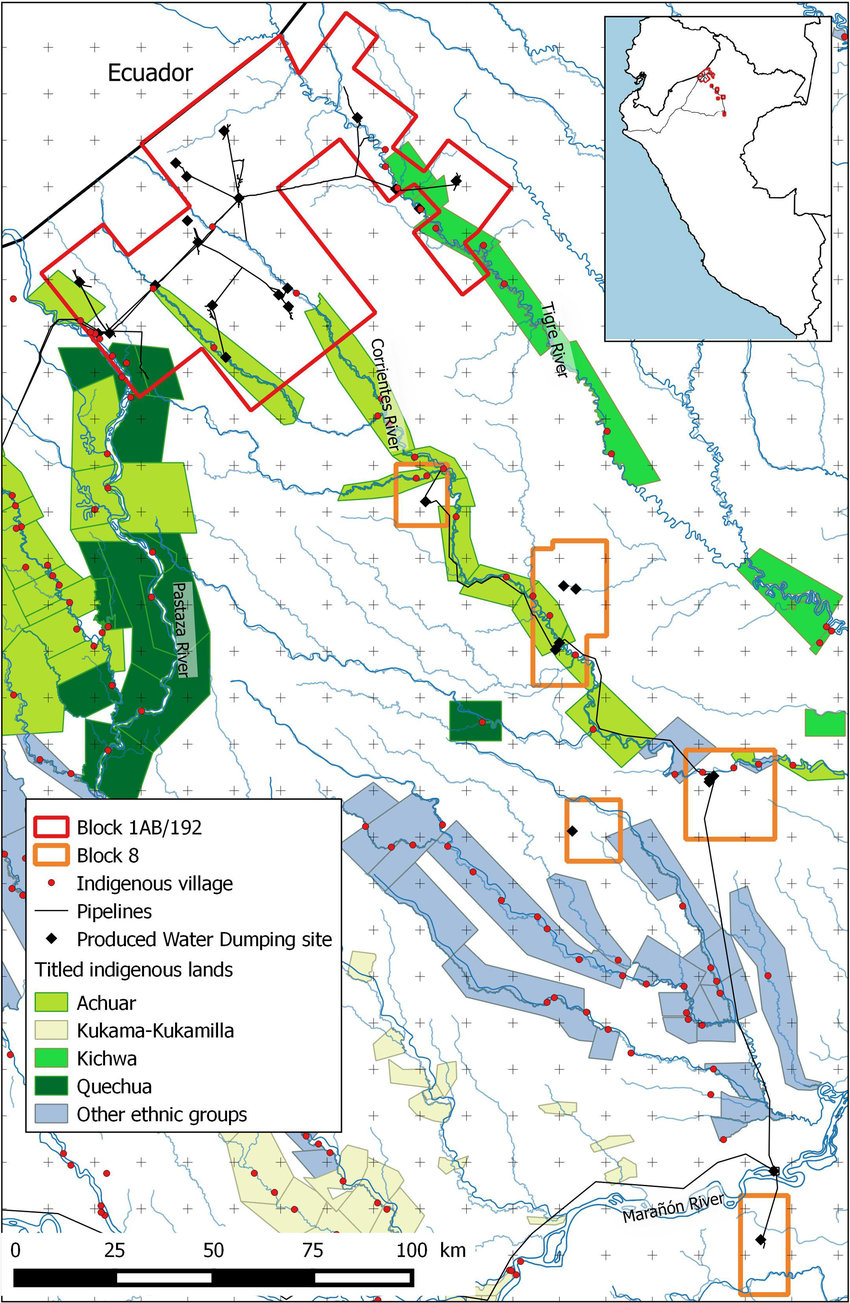 (Reuters) – Peru’s government wants to ramp up oil production in some of its dormant Amazonian fields as global crude prices soar on supply fears linked to Russia’s invasion of Ukraine.

Among the areas prime for a reboot is Block 192, the Andean country’s largest – and leakiest – field. Located deep in the Amazon jungle in northern Peru, the block for decades was one of the country’s leading oil producers.

It’s also the source of extensive ecological damage to the surrounding forest, a big reason pumping ceased two years ago. Oil from hundreds of previous spills still permeates the tropical topsoil, coats native plants and leaks into streams that flow to the mighty Amazon River.

“Here we all live poisoned,” said Pilar Rengifo, a resident of Nuevo Andoas, a hamlet of about 500 residents on the edge of Block 192. In 2016, state-backed testing of 1,138 people in more than three-dozen communities in this oil patch, including Nuevo Andoas, showed that about half had high levels of lead, arsenic and mercury in their bloodstreams, which the government said was likely caused by oil exposure.

Still, Rengifo and other villagers told Reuters they support oil drilling, a source of steady work, and would favor an even stronger push in Lima to bring it back despite the risks.

Surging energy prices have changed the calculus for Peru and countries across Latin America and beyond looking to reduce dependence on foreign oil. Western sanctions on Russia, a major crude exporter, have taken millions of barrels per day out of an already-tight global market. That’s squeezing drivers at the pump, hurting farmers and merchants, and turbo-charging inflation.

Peru imports 80% of its petroleum, gasoline and diesel, a figure President Pedro Castillo is determined to lower. His administration has steered troubled state-owned oil company Petroperu to restart oil production for the first time in decades, though it remains under 1,000 barrels a day. At its peak in 1980, Petroperu’s output was about 200,000 barrels a day, a figure that plummeted amid privatizations that saw the company halt production to focus on refining and distribution.

Castillo is also looking to boost domestic production of natural gas so that the fuel can “reach every home”. Last year he threatened to nationalize the sector but has since softened his tone.

Late last year, former Energy and Mines Minister Eduardo Gonzalez traveled to Houston on behalf of the government to court potential oil investors, whom he declined to name. He showed Reuters a document summarizing his pitch, which looked to reopen drilling in Block 192 and other parts of the Amazon.

“The ideal situation is to be self-sufficient in oil,” he told Reuters.

‘THE WAR THAT AFFECTS EVERYONE’

The Andean nation produces just 40,000 barrels of oil per day, putting it among the smallest producers in Latin America.

Block 192 could add another 25,000 barrels a day to the country’s output, according to Peru’s Ministry of Energy and Mines.

Because Peru’s oil fields are small and remote, turning a profit is expensive. Indigenous communities angered by spills have often responded by taking over roads, airports or key oil pipelines.

Petroperu, meanwhile, is in turmoil amid graft allegations that led its external auditor to decline to audit its 2021 financial statements. Credit agencies recently downgraded its credit rating to junk. Former CEO Hugo Chavez has denied wrongdoing at the company. Acting CEO Francisco de la Torre told Reuters his top priority is to return the firm to investment grade. read more .

Financing is also an issue. Many western lenders are increasingly reticent to bankroll oil production in the Amazon, whose preservation is seen by climate scientists as critical to combating climate change. Peru’s part of the rainforest is second in size only to that of Brazil.

However, war in Ukraine has put a spotlight on energy security globally. Leaders across resource-rich Latin American are bent on shoring up home-grown supplies.

Raising output is critical “especially with the global energy crisis resulting from the war that affects everyone,” Argentina’s Secretary of Energy Darío Martínez said on March 21, when he announced that monthly oil production was at an 11-year high of 571,000 barrels per day.

Petroperu’s de la Torre said Block 192 was key for Peru, as is a $5 billion expansion plan for the firm’s Talara refinery.

“The role of Petroperu today acquires much greater relevance than before the war,” he told Reuters. “Prices are in the clouds and there are problems and shortages in the transport of oil to the southern hemisphere, so imports are more expensive.”

Block 192, near Peru’s border with Ecuador, is around 512,000 hectares in size, or roughly 5,100 square kilometers, according to government data.

The block’s most recent operators, Argentina’s Pluspetrol and Houston-based Frontera Energy Corp, (FEC.TO) were both hit by environmental fines linked to oil leaks there in recent years. Pluspetrol pulled out of Block 192 in 2015 after more than a decade there, though the company remains active elsewhere in Peru. Frontera didn’t renew its contract in 2020 after just five years in operation.

In 2016, Peru’s government designated Block 192 an environmental emergency zone. Since 1997, Peru has seen some 1,000 oil spills, around a quarter of them in Block 192, according to government data compiled by British charity group Oxfam.

Around Nuevo Andoas, the consequences are visible almost everywhere. Reuters traveled to the village in late February, a journey of 639 miles (1,028 kilometers) northeast from the capital.

The news organization witnessed a fresh spill flowing into a river from an abandoned storage facility. Elsewhere, oil dripped from large plastic bags that had been half buried under the soil, part of haphazard mitigation efforts.

Locals told Reuters that oil companies often hired them to clean up leaks, but without providing much training or protective equipment. One of these former workers, Segundo Saavedra, 50, said that throwing a thin layer of dirt over crude-drenched ground was a common practice.

“If you step on it, you’ll see how your foot comes out black with oil,” he said.

Interviews with nearly two dozen residents revealed a community anxious about health and environmental risks, yet supportive of the jobs and income the industry brings.

Villager Rengifo spends much of her time caring for her 11-year-old daughter, Bianca, who cannot walk nor speak. The mother doesn’t know what ails her child because there are no doctors in town.

The mother said life has gotten worse since Frontera pulled out. Her husband, Marcial Garcia, used to ferry cargo and passengers as part of a community-owned transport service. Such work has grown scarce without oil workers coming in and out of the region.

“It was lovely when the oil firm was here,” she said.

Oil extracted from Block 192 travels more than 1,100 kilometers (684 miles) by pipeline to the Talara refinery on Peru’s Pacific coast to be refined into gasoline and diesel.

Meanwhile, Nuevo Andoas lacks even a gas station. Small variety stores peddle liters to the few people who own vehicles.

The dearth of fuel in an oil town is symbolic of the struggles of resource-rich Peru to lift its poorest citizens. Residents near the country’s prolific copper mines – Peru is the world’s No. 2 producer – have long agitated for a bigger share of this mineral wealth.

In Nuevo Andoas, nurse Augusto Acosta, the town’s most senior medical practitioner, has worked at the lone clinic for 15 years. He said medicines were donated by oil companies, resources that have dwindled since those firms packed up.

Resident Saavedra said he ended up in that clinic in 2016 after being overcome by fumes while cleaning up an oil spill. Despite the risks, Saavedra wants the oil firms back. He needs the work, which paid some 1,600 soles ($430) a month.

“Oil is how we win our daily bread,” Saavedra said.