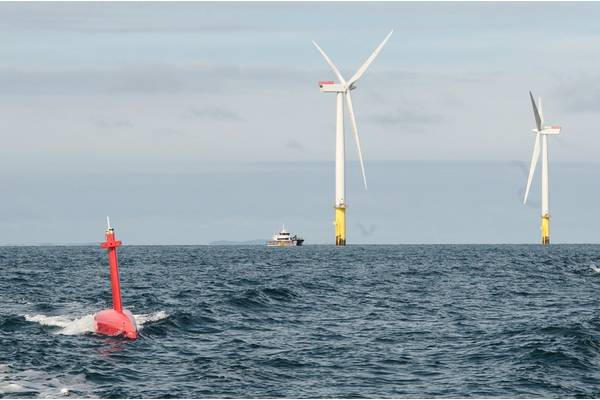 (OE) The use of USVs in the offshore industry has come a long way since they first started making an appearance in the 2010s. After some tentative steps, companies like XOCEAN have come in and blazed a trail, not least in offshore wind.
This has largely been for standard multibeam and sub-bottom profile surveys. But USV developers and users are looking at how these vehicles take a bigger slice of the offshore wind survey and inspection work scope, via specialist low-logistics AI-driven systems through to larger “Swiss army knives”, as well as new sensor systems.

The market “is enormous”, says James Ives, CEO at XOCEAN. “When you look at offshore wind growing 8-10 times over a decade, there’s all of the up-front development work required, there’s a lot of construction support, and as more megawatts and gigawatts are added, they become requirements for maintenance. You can measure the potential in (£) billions in terms of the need for data to support that market.” 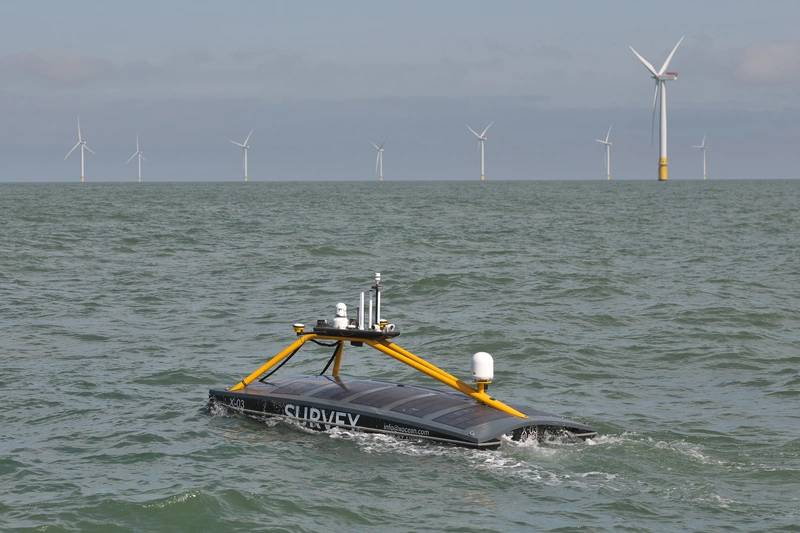 XOCEAN was set up in 2019, performed its first offshore wind survey in 2020 at Greater Gabbard, and now has more than 170 staff. In 1H 2022, it’s done 11,500 survey hours on offshore wind farms across 36 projects (some in the same wind farms) and seven jurisdictions. Early July, it was fitting out its 23rd 4.5m-long XO vehicle.

Most of the work is multibeam, followed by sub-bottom profiling, for wide area surveys through to construction survey and routine surveys, e.g. scour monitoring, pre-jackup installation, array and export cable surveys in <100m water depth.
It’s hoovering up this data by scaling up its fleet and using multiple USVs on single projects, says Ives, sharing surveyors across the fleet and doing more pre- and early processing on the boat, to reduce what needs to be done back onshore. “It’s all about the data,” says Ives. “We’re looking to innovate in how we collect that data and how we integrate, process and deliver that data.” 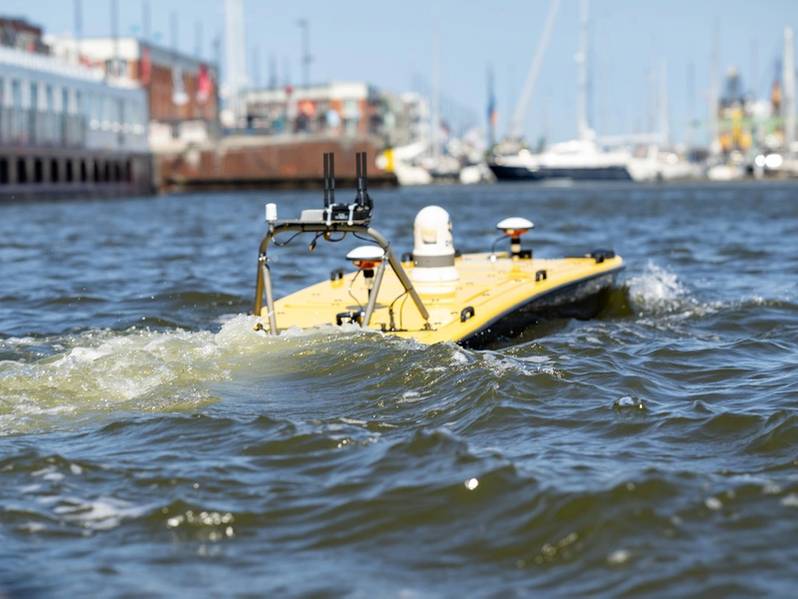 Germany’s Subsea Europe Services sees an opportunity too, for fast, low-logistics specialist USVs, twinned with AI to be able to reduce the overheads and time involved in gathering survey data. Earlier this year, SES’ acquired a 12ft Martac Mantas T12 USV – a fast, low-draft (7-in) craft popular in the defence community, which it has fitted with SES’ integrated Hydrographic Survey System (iHSS), centred on a multibeam echosounder.

Initially, they’re targeting nearshore cable landfall surveys, but see the opportunity to deploy from vessels of opportunity (from service vessels to crew transfer vessels – anything with a 500 kg crane – or even from transformer stations, where they could be recharged. For the German market, this could make operations easier, as USVs haven’t been classified yet, so require guard vessels). For SES, a key aim is automating standardised tasks like depth of burial and scour monitoring could be more automated through use of AI, so data can be sourced faster but also with the need for fewer analysts.

Sören Themann, CEO, Subsea Europe Services says, “There are jobs so standardised today, it makes sense to start developing AI-based systems that targets those specialist applications, such as depth of burial and scour monitoring. These have very specific payloads with very clear specifications throughout the industry. Our job is to make it as autonomous as possible.”

“We need one person responsible for 5-10 USVs, like an airport control,” he says. “That’s where we need to end up or it’s not worthwhile.”

Sulmara, also set up in 2019, is operating a fleet of USVs. “Ultimately, by 2030, we don’t want to be using crewed vessels where alternatives exist,” says chief strategy officer Richard Watson. “We believe the technological advances happening at the moment will allow us to do that.”

Sulmara’s fleet includes multiple platform types including, WAM-V, DriX and, soon, 10 Saildrone Voyager systems, with the first due to go into the market in Q4. Different systems are needed to meet client demands, says Watson. For instance, DriX offers faster survey speed capability and is less susceptible to current and weather than many other systems available; Saildrone Voyagers offer endurance and suitability in deeper waters; WAM-V is great for nearshore, ultra-shallow operations and training.

“DriX can get 120km out to Hornsea in as little as six hours, compared with 24hours for other USVs,” says Watson. “For a short duration debris survey, you send a DriX.  For construction monitoring and regular surveys at a large offshore wind farm or one far offshore you mobilise a field resident Saildrone Voyager. These systems are well equipped with survey sensors and communication technologies, allowing data to be transferred to shore and, where possible, particularly during operations and maintenance, we can do this via the client provided 4G networks now built into wind farms.”

However, the next technology leap is needed, Watson says, for these vehicles to go beyond bathymetry and sub-bottom profiling, to do UXO and archaeological surveys and work in the deeper waters of the floating wind farms, the decoupling of sensors from the USV’s is essential, watch this space for more from Sulmara. This is an area where SES and others see potential too, e.g. for simple towed side scan sonar or single magnetometer.

Another huge potential lies in the operations and maintenance phase, Watson says, USVs hosting an ROV and/or aerial drones. This will become the norm, he says. “However, it requires real investment from companies like Sulmara and also from the developers. As it stands, OPEX models for wind farms built now were created many years ago, in a very different technological, environmental and financial climate and do not always have the budget nor risk appetite to employ new solutions.” He does see this changing for projects reaching financial close in 2023/2024, as they will not require services until 2026 and beyond, allowing time for the technologies to be proven. 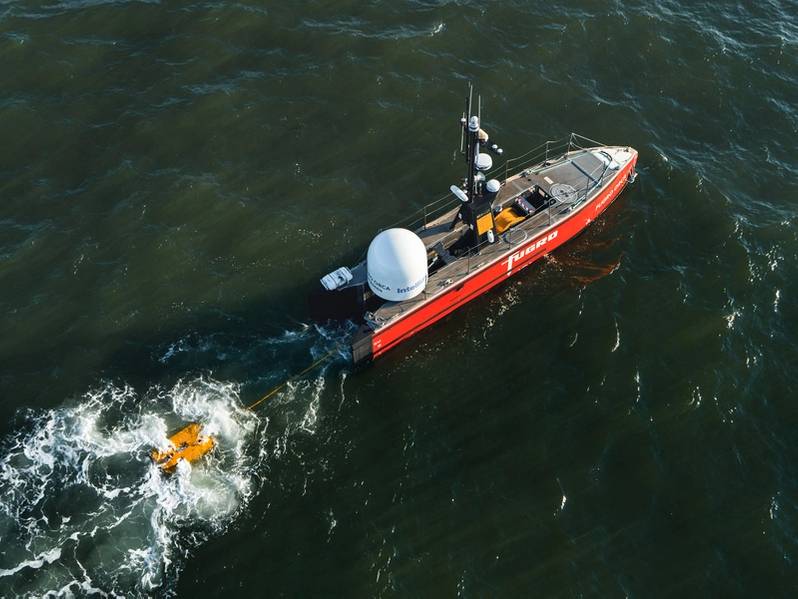 Fugro has already proved the ability to deploy ROVs from its 12m Blue Essence USV. It is focusing more on offshore wind operations and maintenance (O&M) with this vessel, which also has multibeam capability. Its first Blue Essence, Fugro Maali, entered service in 2021. By the end of this year, Fugro expects to have four Blue Essences operational, across Australia, Europe and the Middle East. Fugro anticipates that it will complete  its first wind farm operations, with a Blue Essence, in a trial at Vattenfall’s Aberdeen offshore wind farm, also known as the European Offshore Windfarm Deployment Centre, involving visual and CP inspection using its eROV Blue Volta on turbine bases..

For deeper offshore and floating wind, Fugro is lining up its greater endurance, station keeping and payload capability 18m Blue Eclipse class with a larger eROV, the Blue Amp (with 650 m water depth and light manipulator capability – mostly geared towards cleaning). It’s due to be integrated by the end of June 2023, including sub bottom profiling, a dual head multibeam to provide greater swath and a larger depth of burial system, as well as side scan sonar and cable tracking (TSS 660) on the Blue Amp eROV. The Blue Eclipse could also potentially house a UAV, but over the horizon control needs to be at an appropriate level, says Jones.

Next, Fugro has the Blue Prism, geared towards marine site characterisation. It will have the same capability as the Blue Eclipse, but will be focused on pre-installation and post-decommissioning surveys. Geotechnical capability is a future vision.

“Our view is that you can’t currently fit everything on one vessel,” says Jones. “One could be fit for wind farm asset integrity, but might not be appropriate for construction or UXO survey.” 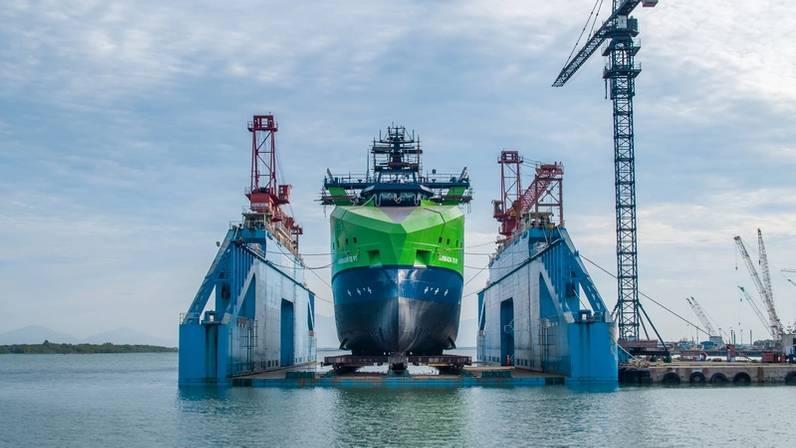 Ocean Infinity is going even bigger with its emerging Armada Fleet. Ocean Infinity’s first 78m vessel is undergoing commissioning and expected to start work early next year, initially targeting projects in European waters. This will be under a lean crew, which is expected to accompany it for at least a few years. Its first two, 21m vessels maybe out late this year/early next year. The second two 21m vessels will follow, followed by its 36m vessels. As well as greater fixed sensor payloads, these vessels will have capability to tow traditional side scan sonar and magnetometer sensors and host ROVs and AUVs, says Michael King, Sales and Business Development, Ocean Infinity. UAV support is also in the plan.

Shorter-term, the company has a fleet of 8m L3Harris C-Worker USVs and, following its acquisition of iXblue Australia, two DriX on order for delivery later this year.

Ocean Infinity’s larger vessels are “a very different ball game”, says King. “Once you’ve got those platforms in place you can use them for an awful lot of things,” not least operating in deeper, harsher waters, but also for longer with fewer port 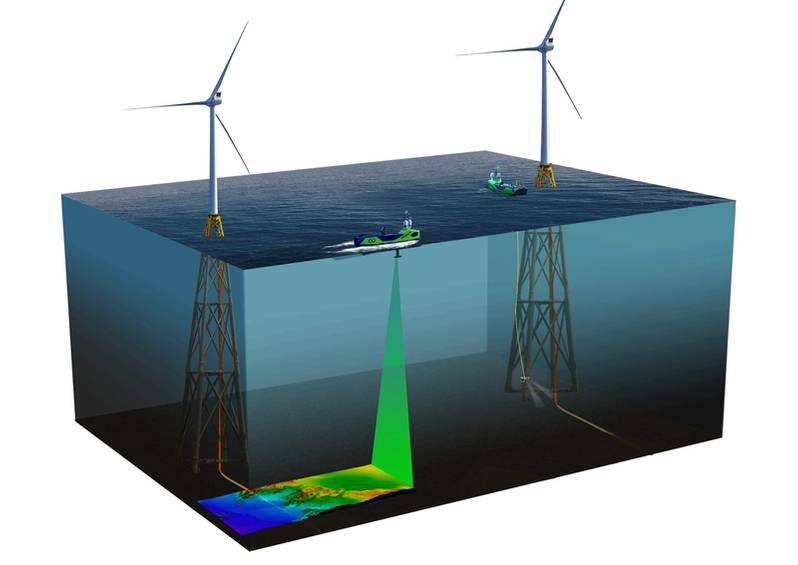 Phil Hart, Survey Systems Integration Specialist, at Ocean Infinity, says it’s enabling as much acquisition and processing work flow as possible to be done on the vessels, only transmitting small amounts of data for quality control in near real time to validate collected data specification and quality. It’s also about using and share communications bandwidth smartly, so there’s a hierarchy of control with navigation at the top, followed by dynamic things like ROV control.
“Once we have that really robust control infrastructure, we can cover the ship, as well as the subsea environment with ROVs and geophysical and hydrographic sensors,” King says. “We can cover the aerial and topside environment with drones and laser scanning and bring that all into one operational solution, all monitored through one connection to the remote control centre, giving a complete holistic view of an offshore wind farm. That’s what we’re trying to achieve, but it’s a long-term future goal.”

Changing the way data is gathered and handled also opens up new ways of working and operating – from moving away from vessel chartering for a survey to cloud-based data processing and multi-client missions, adds Jones. 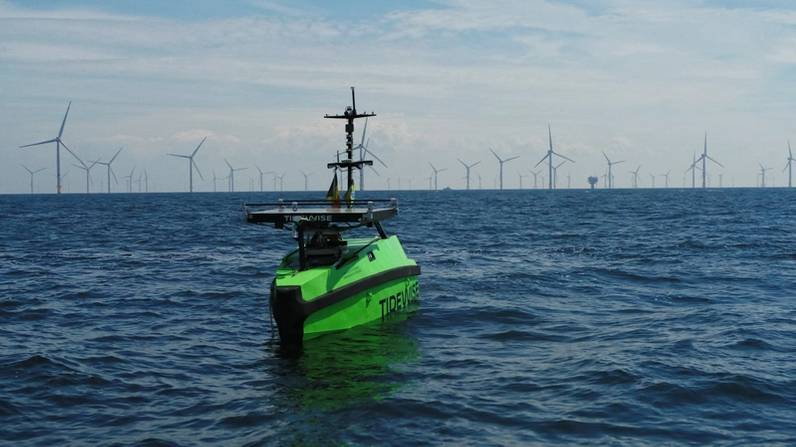 Brazilian startup Tidewise has been making in-roads into USV-based operations. Co-founded in 2019, by a naval architect and a robotics specialist, it launched its first USV, the 4.95 m Tupan, the same year.

It initially developed a UAV-hosting capability, primarily for oil spill detection, for Repsol Sinopec. But this year, for Belgium’s Elia, it demonstrated visual inspection capability for offshore wind substations, alongside mulitibeam data collection, to assess the subsea cables, and lidar, to create a point cloud of the structure.

In Tidewise’s sights is foundation and turbine base inspection, says co-founder and director Rafael Coelho. In deeper water, moorings and floating structure inspection, similar to FPSO uWILD (underwater inspection in lieu of drydocking), Tidewise is targeting in Brazil, is next. For this it’s working on integrating a DeepTrekker Evolution inspection ROV into its USV for up to ~75m deep. This is due to be demonstrated in February 2023, with visual and CP measurements. But it’s also targeting thermal inspection and close visual inspection of the blades and turbines using a UAV and high optical zoom camera.

For the UAV, it’s been using a DGI M600, but Coelho says smaller systems can be used and they want one with more open architecture for development work to increase capability and remote operations. But AI will also play a role, says Rafael, for things like spotting blade defects.

For using a larger ROV and being able to integrate more sensor payloads, Tidewise is developing a larger USV. This is targeting site characterisation work, so would need towed magnetometer and side scan sonar, he says. For deep offshore Brazil work, it has a 24m design, which will be able to carry a small work class ROV, says Rafael.