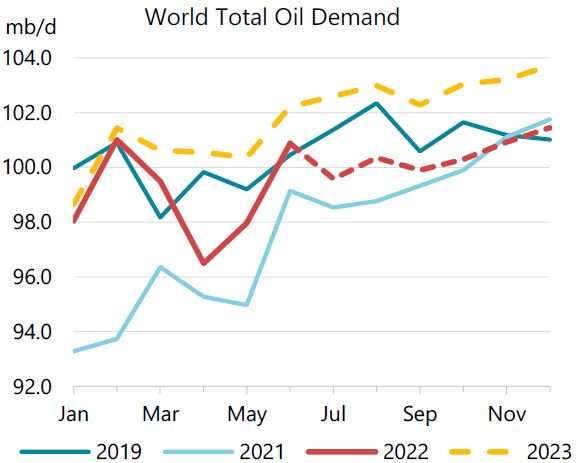 (Reuters) – Growth in global oil demand is set to grind to a halt in the fourth quarter of this year as an economic slowdown deepens, the International Energy Agency (IEA) said on Wednesday, but said it would resume strongly in 2023.

The outlook preserves a relatively bullish view for robust growth next year despite economic headwinds, built on the expectation that China’s COVID lockdowns will ease while growth in air travel will boost jet fuel demand.

“Global oil demand remains under pressure from the faltering Chinese economy and an ongoing slowdown in OECD economies,” the Paris-based energy watchdog said in its monthly oil report.

The IEA cut its forecast for demand growth this year by 110,000 barrels per day (bpd) to 2 million bpd while keeping its 2023 growth forecast of 2.1 million bpd.

Rich countries in the Organisation for Economic Cooperation and Development (OECD) accounted for most of the rise in demand this year, while countries outside the group especially China will underpin growth next year provided Beijing relaxes its COVID curbs.

“Non-OECD countries will cover three-quarters of 2023’s gains if China reopens as expected,” the IEA added.

Offsetting the hit to demand by the economy, a switch from gas to oil for power generation will provide a 700,000 bpd boost in the last quarter of this year and the first of the next especially in Europe and the Middle East.

Meanwhile Russian oil exports are set for a bumpy ride as the European Union plans to impose a ban on maritime services transporting it on Dec. 5.

The ban will push Russian oil production down to 9.5 million bpd by February next year, the IEA said, a 1.9 million bpd drop compared to February 2022. A plan by G7 countries to cap Russian oil sales prices and not ban the trade may ease those losses.