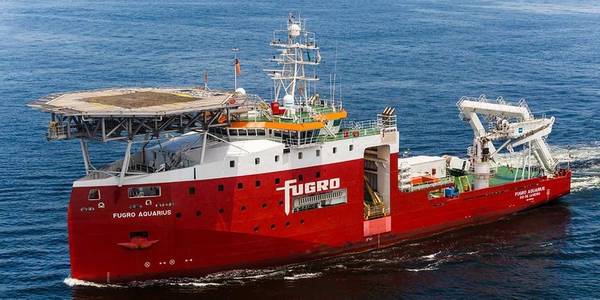 Fugro has reported a revenue of €833 million for the first half of 2022, an increase of 17.2% compared to the same period last year, driven by growth in all markets, particularly high client demand for renewables services.

Utilization of Fugro’s fleet was 67% in the first half-year, versus 69% in the same period last year, said to be due to a relatively large number of scheduled dry dockings in the first quarter and to the related increase in the number of short-term charters.

First-half operational cash flow increased, countered by €65.2 million capital expenditure, because of a higher number of scheduled dry dockings this year and the major conversion of the Fugro Quest to a geotechnical vessel. As a result, free cash flow amounted to negative €74.9 million, the Dutch company reported.

The 12-month backlog increased by 21.7%, supported by all regions and all business lines.

“Against a backdrop of geopolitical uncertainty and volatile markets, we are experiencing high client demand for energy transition and climate change adaptation solutions across the globe,” said Mark Heine, Fugro’s CEO.

“In particular for offshore wind developments, activity levels are high. Due to the tragic war in Ukraine, energy security is now also firmly on the agenda of countries worldwide and supports our traditional energy activities.”

Fugro said that the EBIT margin improved despite higher cost levels and supply chain pressures, which mainly impacted the marine business. Inflationary pressure was most significant for fuel, charters and third-party personnel, while supply chain challenges resulted in some delays in vessel mobilizations.

“Our EBIT margin improved, and I am pleased that, in addition to Europe-Africa, the Americas, Asia Pacific and Middle East & India are contributing again to group performance,” Heine said.

“At the same time, the uncertain macro-economic environment, intensified by the war in Ukraine has resulted in a sharp increase in inflationary and supply chain pressures during the past months, especially in marine. However, in good cooperation with our clients, we have managed to partially mitigate the impact of these unprecedented price increases.”

Fugro also announced it had raised approximately €116 million by issuing 10,319,036 new ordinary shares at an offer price of €11.25 per new share through an accelerated bookbuilding.

The offering represented approximately 10% of the company’s issued and outstanding share capital.

Fugro plans to use the net proceeds of the offering, in conjunction with the previously disclosed new sustainability-linked bank financing arrangement, consisting of a €200 million three-year revolving credit facility and a €200 million three-year term loan to refinance existing indebtedness including a potential investor put of the 2024 Convertible Bond outstanding and for general corporate purposes.

Admission to listing and trading of the new shares on Euronext Amsterdam and the delivery of new shares are expected to take place on 28 July.