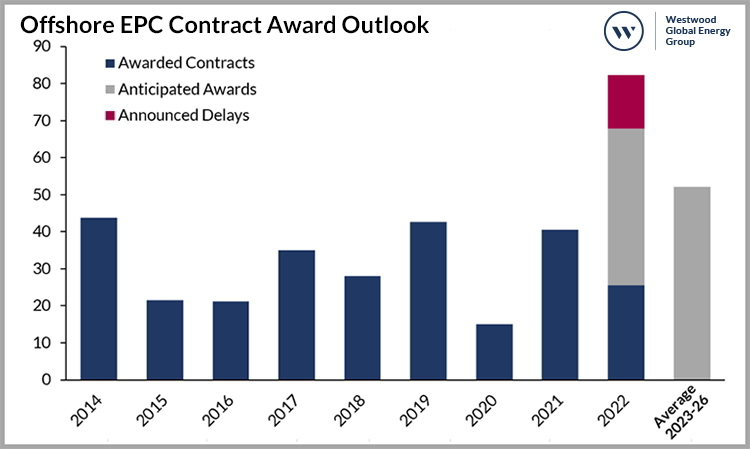 After curbed spending over the past two years, the oil and gas (O&G) sector is primed to get back into the game with high investments, putting contractors into a buoyant mode as the five-year offshore engineering, procurement, and construction (EPC) spend is expected to total $276 billion, outlined Westwood Global Energy, an energy market research and consultancy firm.

The company explained that there were high expectations for an influx of offshore EPC awards, however, despite an increase in early-stage engagement of the supply chain by E&Ps and a steady growth in the number of pre-sanction projects, the optimism for a bumper year has been somewhat tempered. As a result, Westwood’s 2022 offshore EPC contract award value is now estimated to close at $68 billion, 18 per cent lower than its January 2022 outlook.

The energy market research provider elaborated that this decline is due to delays in project sanctioning, as some operators remodel project economics due to supply chain inflationary pressures that could range between 10 per cent to 15 per cent for subsea equipment and production platforms.

Moreover, Westwood points out that it has been challenging for the supply chain to scale up quickly after being forced to downsize during the pandemic. Therefore, this has led to limited participants in some EPC tenders, causing operators to continually extend bid deadline dates or retender for projects to increase competition, forcing a delay on the project-sanctioning timeline.

In lieu of this, some major projects that have had final investment decision (FID) and EPC award delayed from the first quarter of 2022 include Equinor’s Rosebank development (UK), TotalEnergies’ Cameia-Golfinho project (Angola), and the Preowei field (Nigeria), PetroVietnam’s Block B project (Vietnam), as well as Petronas’ Bestari (Malaysia). Although these delayed projects are expected to be sanctioned over the next 18 months, other projects such as Shell’s Linnorm (Norway) and Aker Energy’s Pecan (Ghana) have been shelved indefinitely. This has been done due to Shell exploring alternative development concepts for its Linnorm field, while Aker Energy seeks potential farm-in partners for Lukoil’s stake in the Pecan field because of uncertainties surrounding the complexity of possible future Western sanctions against the Russian-based operator.

Elsewhere in the Americas, Shell is working with Equinor to complete and update the field development plan (FDP) for its recently acquired Sparta field in the U.S. Gulf of Mexico (GoM) – formerly TotalEnergies’ North Platte. However, Westwood notes that no development timeline has been announced after TotalEnergies ditched development plans and relinquished its 60 per cent stake in the field earlier this year.

Meanwhile, following the announcement of the Krabdagu discovery in Block 58 in February 2022, TotalEnergies and block partner Apache opted to prioritise the appraisal of existing Block 58 discoveries in Suriname alongside further exploration ahead of previously stated development plans within the block. According to Westwood, the development of existing discoveries is not anticipated to start until 2024.

Keeping all this at the forefront, Westwood underlines that the offshore O&G EPC-related contracting activity in the first half of 2022 has been robust, with an estimated award value of approximately $26 billion – a three-fold increase compared to the same period in 2021. The energy market research player informs that this spend was driven by 123 subsea tree unit awards, eight floating production systems (FPS) – four newbuilds, two conversions, two upgrades/redeployments, 52 fixed platforms (topsides), over 1,600 km of subsea umbilicals, risers & flowlines (SURF) and 1,660 km of line pipe.

In its outlook for the second half of 2022, Westwood estimates offshore O&G EPC related awards to total $42 billion, driven by contract awards for 138 subsea tree units, 15 FPS units, 119 fixed platforms (topsides), over 3,870 km of SURF and 3,500 km of line pipe. The energy market research firm claims that 60 per cent of the expected fixed platform topsides awards in the second half od 2022 will be driven by Saudi Aramco, as the NOC continues to invest in its Abu Safah, Manifa, Safaniya and Zuluf projects, with 50 platform jackets already awarded across these fields in the first quarter of 2022.

When it comes to other key contract awards anticipated in the second quarter of 2022, Westwood says that these include Shell’s Gato do Mato (Brazil), Aker BP’s NOA Fulla and Wisting project offshore Norway, QatarEnergy’s North Field Compression phase one project, as well as Woodside Energy’s Trion (Mexico). The energy market research provider further adds that the FID on Trion could be delayed beyond 2022 due to the recently completed merger of BHP’s O&G portfolio with Woodside Energy Group, as the operator aims to gain full knowledge of the BHP assets it has inherited.

Westwood believes that after a turbulent 2020-21 period denominated by the Covid-19 pandemic, the erosion of oil demand and a crash in oil prices, the offshore O&G sector is ready for a flurry of investment to make up for limited spending over the last few years.

In line with this, the EIA predicts Brent oil price to average $104/bbl and $94/bbl in 2022 and 2023 respectively, setting the tone for an upcycle while the data from Westwood’s SubseaLogix and PlatformLogix market analytic tools shows a sustained upcycle over the 2022-26 forecast period in the absence of any significant shocks in O&G demand.

In this period, the offshore EPC spend is expected to total $276 billion, a 71 per cent increase compared to the preceding five-year period, as disclosed by Westwood. The energy market research player forecasts that Asia, the Middle East and Latin America will dominate expenditure.