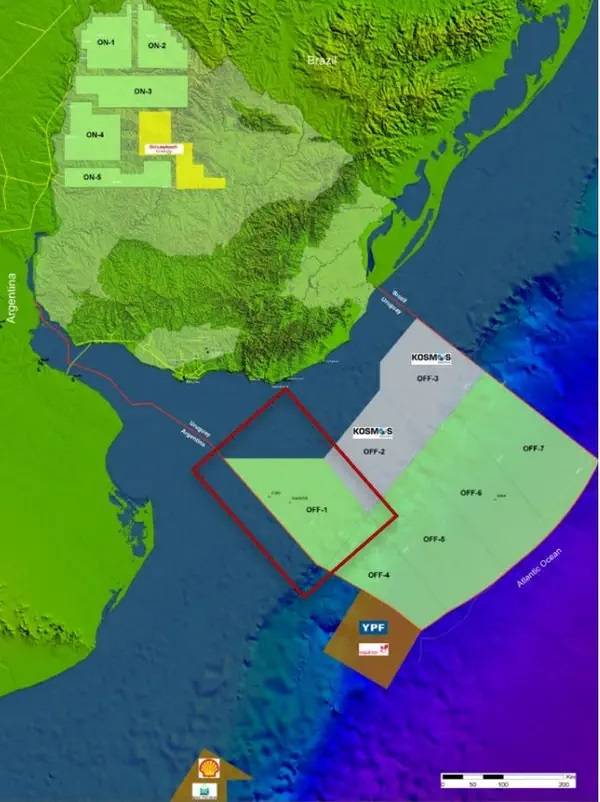 Challenger Energy, the company previously known as the Bahamas Petroleum Company, has formally signed a license agreement for the AREA OFF-1 petroleum license offshore Uruguay.

The AREA OFF-1 license has a total area of approximately 15,000 km2 and is situated in water depths from 20 to 1000 meters, approximately 100 kms off the Uruguayan coast.

The AREA OFF-1 license was awarded to the company in May of 2020. However, since the award, according to Challenger, there has been an extended period of non-activity, largely as a result of the Covid-19 pandemic, during which the formal signature of the license was pending.

” Following final approvals being granted by decree of the President of Uruguay, the AREA OFF-1 license was formally signed on 25 May 2022. Consequently, the first 4-year exploration period under the license has commenced,” Challenger said.

Challenger Energy’s minimum work obligation during this initial period is to undertake relatively modest, low-cost reprocessing and reinterpretation of selected historical 2D seismic data. There is no drilling obligation in the initial phase.

“The company’s work program and budget for the balance of 2022 and into 2023 includes sufficient allocation of funds to progress the agree minimum work obligation on AREA OFF-1,” the company said.

According to Challenger Energy, AREA OFF-1 contains a management estimated resource potential exceeding 1 billion barrels of oil equivalent recoverable (BBOE), based on current mapping from multiple exploration plays and leads in relatively shallow waters, and with significant upside running room.

“This estimate is corroborated by formal resource estimates provided by ANCAP (the Uruguayan national oil company) of 1.36 BBOE as a P50 expected ultimate recoverable resource,” the company said.

Per Challenger, the AREA OFF-1 play system is directly analogous to the recent prolific, conjugate margin discoveries made offshore Namibia by Total (the Venus well) and Shell (the Graff well), where reported multi-billion-barrel Cretaceous turbidite reservoirs have been encountered. The AREA OFF-1 license exhibits the same Aptian play source rock and petroleum systems being present, Challenger said.

“The company has received multiple indications of interest in relation to potential partnerships for the AREA OFF-1 license. The company intends to explore such possibilities with a view to potentially expediting a 3D seismic acquisition into the first license exploration period. Further updates will be provided as and when appropriate,” Challenger said.

Eytan Uliel, Chief Executive Officer of Challenger Energy, said: “Two years ago, at the peak of a period of industry inactivity due to the pandemic, we identified a compelling opportunity to apply for the OFF-1 license in Uruguay.  For a very low cost we were able to secure an exploration license of an extremely high quality, with a greater than 1-billion-barrel recoverable resource potential.

Since then, while waiting for formal approval of the license, the world has changed in a way that makes this license even more attractive. Globally significant developments are now underway along the South American Atlantic margin in Guyana and Suriname – basins with analogous technical characteristics. Even more significantly, very recent mega-discoveries from the South Atlantic conjugate margin to Uruguay, offshore Namibia, from two wells drilled by majors in the past few months, have calibrated and confirmed the play source rock and petroleum systems evident on seismic in OFF-1.

“With the license formally signed, we are now able to begin pushing ahead with our initial low-cost work program. At the same time, over the remainder of 2022 and into 2023, we will explore partnering options that could lead to an accelerated work program – the object being to quickly and fully evaluate the license’s potential, and to thereby create what we hope will be an opportunity of great value to shareholders.”