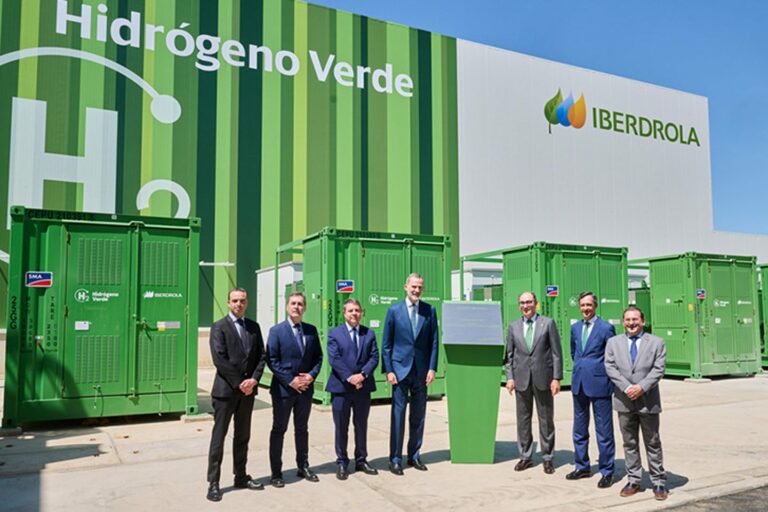 Iberdrola has commissioned a solar-powered green hydrogen plant in Puertollano, central Spain, which it says is the largest plant currently operating in the world.

The plant was opened on Friday by a delegation including King Felipe VI of Spain, the President of the Regional Government of Castilla-La Mancha, Emiliano García-Page, and Iberdrola chairman Ignacio Galán, alongside a host of other politicians and dignitaries.

Iberdrola has invested €150 million in both the electrolysis systems and a dedicated 100MW photovoltaic (PV) solar plant to power the site.

It says the Puertollano plant will be able to produce up to 3,000 tonnes of 100% green hydrogen per year, avoiding the equivalent emissions of 78,000 tonnes of CO2 per year.

Moreover, the plant is equipped with bifacial panels – allowing for greater production – and a 20MWh lithium-ion battery system, enabling a total annual output of around 156,000 MWh.

Produced hydrogen will be used in a nearby ammonia factory, operated by Fertiberia Group.

During his speech, Mr Galán said the opening of the site represented the start of a €2 billion plan to replace imported gas with green hydrogen in the production of ammonia for fertilisers.

This would see the group develop 40,000 tonnes per year of green hydrogen for Fertiberia’s consumption between now and 2027, with a potential investment of €1.8bn.

The initiative would represent 20% of the national target for 2030 and would ensure that around 25% of the hydrogen currently consumed in Spain is CO2-free, the group added.

In addition, it hopes to use waste heat produced during the electrolysis process to create a green heat network in the local municipality, which the company says will also help reduce fossil fuel use.

More widely, Iberdrola has a project portfolio which could see up to €9bn invested by 2030, with the aim of producing 400,000 tonnes of green hydrogen per year. So far, it has already initiated 60 projects in locations around the world.

This includes schemes backed by the group’s UK unit ScottishPower, the first of which is a plan to generate up to 4,000 tonnes per year at site in Cromarty, in partnership with Storegga.

Due to begin operating in 2024, the plant could be scaled up to 20,000 tonnes in future, and will help enable the decarbonisation of distillery heating processes.

A second projected is located at the Whitelee wind farm on the outskirts of Glasgow. This facility, which will be able to produce 3,000 tonnes of green hydrogen per year, will come on stream in 2023 and will be capable of supplying enough emission-free hydrogen to power up to 550 buses a day to and from Glasgow and Edinburgh.