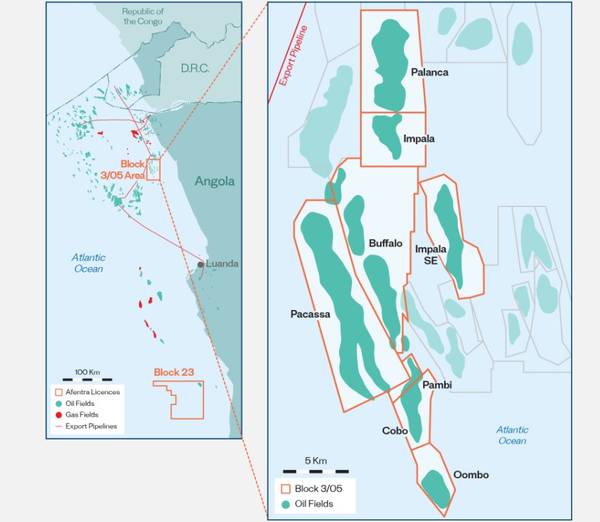 The acquisition marks Afentra’s entry into Angola, “one of the company’s key target markets in West Africa.”

In Block 3/05, Afentra is acquiring a 20% non-operated interest in a high-potential long-life asset, and in Block 23, it is buying a non-operated 40% interest “in a highly prospective deepwater exploration and appraisal opportunity.”

Block 3/05 is located in the Lower Congo Basin and consists of eight mature producing fields. The discoveries were made by Elf Petroleum (now part of TotalEnergies) in the early 1980s. Development was by shallow-water (40-100m) platforms that included successful waterflood activities with first oil in 1985.

Sonangol assumed operatorship from 2005 and has focused on sustaining production through workovers and maintaining asset integrity. No infill drilling campaigns have taken place in the last 15 years. The asset has a diverse portfolio of over 100 wells and currently produces from around 40 production wells and has nine active water injectors. The facilities include 17 well-head and support platforms and four processing platforms, with oil exported via the Palanca FSO.

Block 23 is a 5,000 km2 exploration and appraisal block located in the Kwanza basin in water depths from 600 to 1,600 meters and has a working petroleum system. While the large block is covered by modern 3D and 2D seismic data sets, with no outstanding work commitments remaining, the majority of the block remains under-explored.

The block contains the Azul oil discovery, the first deepwater pre-salt discovery in the Kwanza basin. This discovery made in carbonate reservoirs has oil in place of around 150 mmbo and tested at flow rates of around 3,000 – 4,000 bopd of light oil.

Post completion of the Acquisition, the JV is expected to be comprised of Namcor, Sequa, and Petrolog(40% and operator); Afentra (40%), and Sonangol (20%).

Afentra plans to fund the acquisition of stakes in the two blocks with new debt facilities and existing cash on the balance sheet.

“Discussions with prospective providers of debt finance are well advanced and will be finalized in due course,” Afentra said.

“While completion is expected in the third quarter of 2022, next steps in the process include the conclusion of Afentra’s due diligence exercise, the provision of a bank guarantee in respect of the 10% transaction deposit and the completion of the right of first offer process by Sonangol.

Government approvals and a license extension for Block 3/05 are anticipated to be granted, with the publication of the AIM re-admission document and resumption of trading anticipated to occur mid-year,” Afentra said.

The acquisition is subject to the receipt of shareholder approval pursuant to an ordinary resolution to be proposed at a General Meeting and re-admission of the enlarged group to trading on AIM.

Afentra CEO Paul McDade said: “We are delighted to have agreed terms with Sonangol and signed the SPA for our entry into Block 3/05, Lower Congo basin and Block 23, Kwanza basin in Angola. This transformative deal marks our first acquisition since launch last year, and sees the company enter Angola, a major oil and gas jurisdiction with significant opportunities ahead to build a material business and positively impact the energy transition in Africa.

This highly accretive transaction gives Afentra exposure to a high-quality asset base, underpinned by strong cash flow from stable and long-life production and 20 million barrels1 of net 2P Reserves.

The assets, containing over 3 billion barrels of oil in place, provide significant scope for further value creation from production optimization, infill drilling and incremental developments. The attractive deal metrics and strong cashflow generation demonstrate Afentra’s commercial discipline and focus on robust cash flow. The entry into Block 23 provides us the opportunity to work with Sonangol to better understand and unlock the potential of this exciting and highly prospective exploration area.