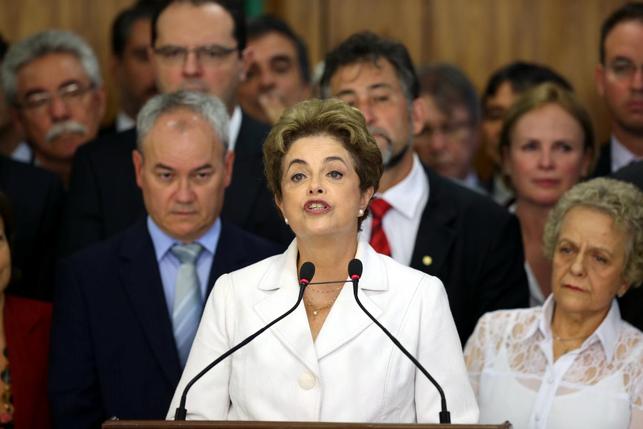 Suspended Brazilian President Dilma Rousseff vowed on Thursday she would fight to prove her innocence after the Senate voted to put her on trial for breaking budget laws, a historic decision fueled by deep recession and a sprawling corruption scandal.

Rousseff, a leftist in office since 2011, was replaced by her vice president, centrist Michel Temer, who took over as interim president for the duration of a Senate trial that could take up to six months.

Speaking shortly before she left Brasilia’s Planalto presidential palace, Rousseff told supporters she was notified of her suspension on Thursday morning. She reiterated what she has maintained since impeachment proceedings were launched against her last December by the lower house of Congress.

“I may have made mistakes but I did not commit any crime,” Rousseff said in an angry address, calling the impeachment “fraudulent” and “a coup.”

Rousseff, 68, was flanked by dozens of ministers who were leaving with her administration. Even as many of them wept, Rousseff remained stolid.

“I never imagined that it would be necessary to fight once again against a coup in this country,” Rousseff said, in a reference to her youth fighting Brazil’s military dictatorship.

Shortly afterward, she addressed hundreds of supporters outside, many of them dressed in the red of her Workers Party, and already shouting “Temer out!”

“This is a tragic hour for our country,” Rousseff said, calling her suspension an effort by conservatives to roll back the social and economic gains made by the Workers Party during its 13 years in power.