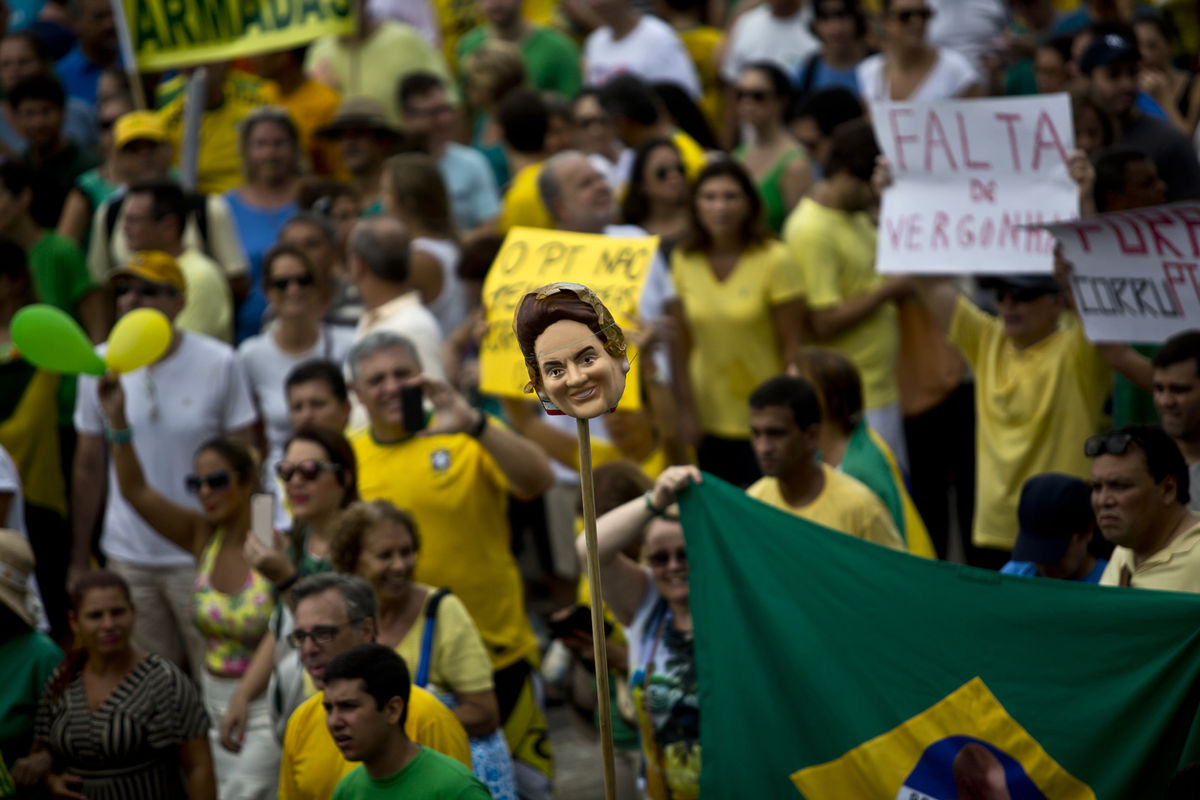 Demonstrators carry a mask with the face of Brazilian President Dilma Roussef during a protest near Copacabana Beach in Rio de Janeiro, on Sunday, March 15. Rousseff’s administration faces growing opposition in the streets and Congress following allegations her party benefited from kickbacks at Petroleo Brasileiro SA. Photographer: Dado Galdieri/Bloomberg

Rousseff, 67, was rated good or very good by 13 percent of respondents, down from 23 percent in a Feb. 3-5 Datafolha poll. It is the lowest level since she took office in 2011, according to the poll published Wednesday on the website of newspaper Folha de S. Paulo.

Rousseff’s administration faces growing opposition in the streets and Congress following allegations her party benefited from kickbacks at state-run oil company Petroleo Brasileiro SA, an allegation it denies. The scandal has crimped investments in the energy and construction industries as analysts forecast Latin America’s largest economy will contract this year.

“She has lost all political capital,” Marcos Troyjo, who teaches and co-heads a forum on emerging markets at Columbia University in New York, said by phone from Sao Paulo. “It will be an uphill battle for her to rebuild support in Congress and approve her economic measures.”

Rousseff’s government is raising taxes and cutting spending as a means to shrink the budget deficit and avert a downgrade to its sovereign credit rating after years of ballooning spending and subsidized lending. Congress has balked at proposals to cut pension and labor benefits.

Gross domestic product will contract 0.8 percent and inflation will accelerate to an above-target 7.9 percent this year, according to the latest central bank survey of analysts.

The Datafolha poll shows 62 percent of respondents rank Rousseff’s government as bad or terrible, up from 44 percent in February and the worst since the administration of Fernando Collor, who resigned in 1992 amid corruption allegations. The poll of 2,842 people conducted March 16-17 has a margin of error of two percentage points.

Rousseff on Wednesday will announce a series of anti-corruption measures, according to her agenda. She is also considering alterations in her cabinet to accommodate demands for more decision-making by her main coalition partner, the PMDB party, local media including newspaper Estado de Sao Paulo reported today.

More than 1 million people protested on Sunday in cities throughout Brazil. Of those surveyed by Datafolha in Sao Paulo that day, 27 percent cited impeachment as the main reason for their attendance, Folha de Sao Paulo newspaper reported on Tuesday. Nearly half went to the streets to speak out against corruption, according to the poll that surveyed 432 people and has a margin of error of five percentage points.

After the protests, several congressional leaders said there are no legal grounds to impeach Rousseff, and Eurasia Group consulting firm said many members of Congress prefer to benefit from a weak president than ousting her.

“If Dilma did something illegal, she will have to answer and be punished after the end of her second term,” lower house President Eduardo Cunha said in an interview with TV Cultura that aired Monday night. “According to the Constitution, she has immunity until the end of this mandate.”

Rousseff said this week she was open to dialogue with anybody, adding she may have made some mistakes on economic policy. Her party denies allegations of corruption and says all donations were legal.