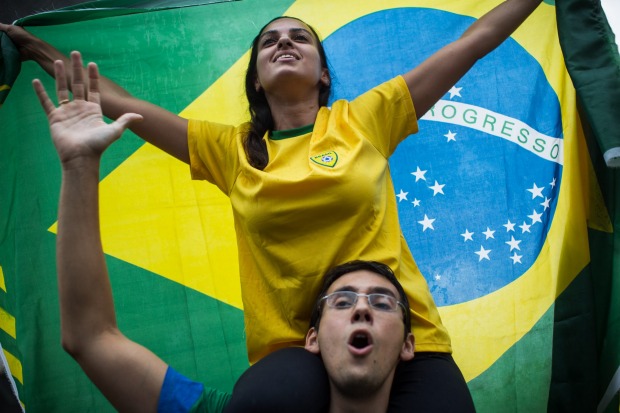 Protests across Brazil were held this week against President Dilma Rousseff’s government with many protesters calling for her impeachment. A massive corruption scandal at Brazil’s state-owned oil company Petrobras has rocked the government and Dilma’s approval ratings are now around 23 per cent. Getty Images

Petrobras, the Brazilian state oil company, has a serious image problem (and not just the recent scandal). The market simply loathes the company. Credit Suisse surveyed 160 portfolio managers and found that 60 per cent were underweight the stock; most dislike the recent management changes; almost a fifth think the company will never (never!) generate free cash flow. Radical action is required. The core problem is cash burn. In the nine months to September 2014 (the most recent available figures) the outflow was nearly R$13bn ($5.4bn) after capital spending. Given lower oil prices the deficit is likely to be worse this year, despite promises to cut capital spending to R$90bn this year from more than R$100bn the year before.

Most companies would borrow to fill such a gap. But indebtedness at Petrobras is already dangerously high following big investments in refineries and offshore fields. Net debt is R$261bn, four times the estimated 2014 earnings before interest, tax, depreciation and amortisation. No surprise Moody’s downgraded the company last month.

Heaping on more debt is, therefore, not the way back into investors’ hearts. It merely defers the real problem. Asset sales are the next option. The company wants to sell R$10bn of assets this year, about a quarter of its longer term target. If it can do so, that will help. But a cash outflow of at least R$25bn would remain. The next option is equity issuance. Even issuing just enough equity to close this year’s deficit and prevent debt from rising could increase the share base by a fifth.

Then the hard work begins: making sure that the deficits do not reoccur. In the absence of a big recovery in oil prices, this means taking an axe to investment – ultimately, cutting it by as much as half.

This is all very aggressive. But Petrobras is close to becoming a market pariah. Its other option is a full state bailout.

One thought on “Petrobras: cashing out”