Brazil Congress to Exploit Weakened Rousseff Rather Than Impeach 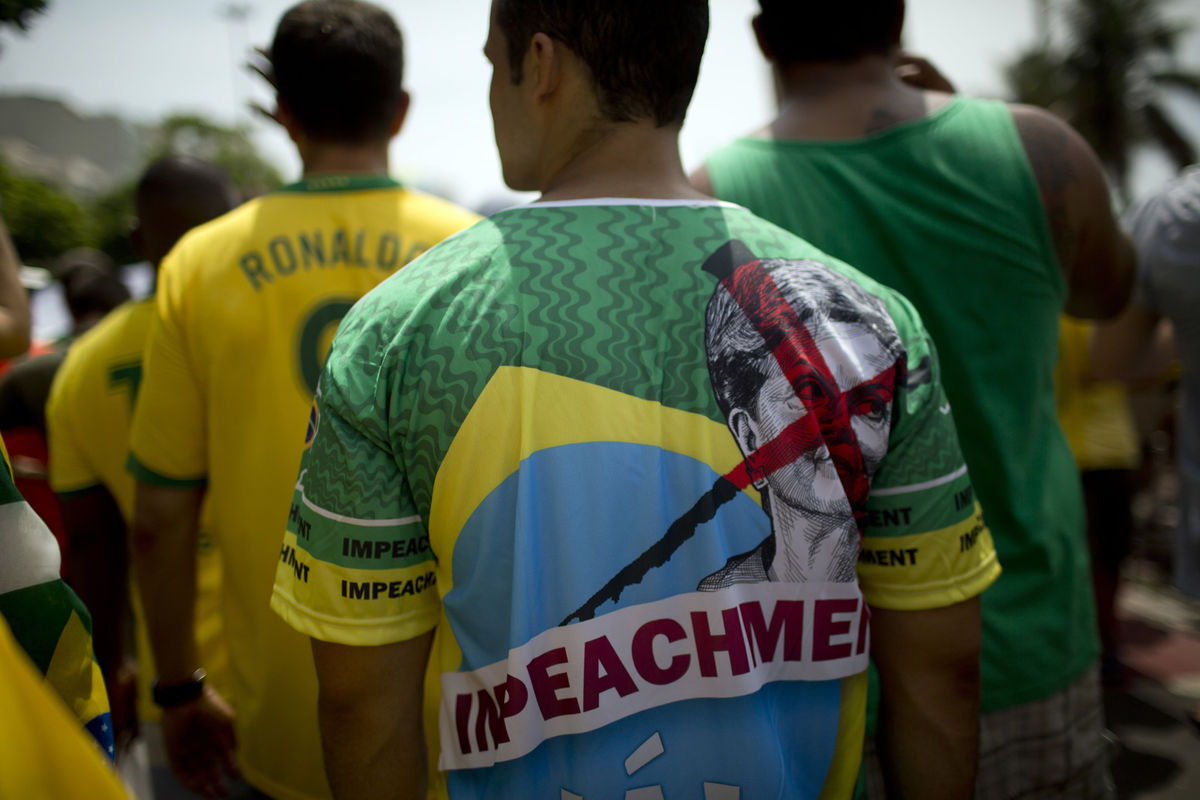 A man wears a tee shirt calling for the impeachment of Brazilian President Dilma Rousseff during a protest near Copacabana Beach in Rio de Janeiro, Sunday, March 15. Rousseff’s rating has plummeted by 19 percentage points since December to 23 percent, according to a Datafolha poll conducted Feb. 3-5. Photographer: Dado Galdieri/Bloomberg

(Bloomberg) — The million Brazilians who took to the streets Sunday aren’t enough to force President Dilma Rousseff’s impeachment given a lack of willpower within Congress to press the issue.

There’s only a 20 percent chance that lawmakers will force Rousseff out of office as many are happier to exploit a weak president than try and oust her, said Eurasia Group’s Chris Garman.

“Interests in Congress diverge over impeachment; they’re all a bit fearful and uncertain what that would entail,” said Garman, head of country analysis for Latin America. “Markets under-appreciate how difficult it is to impeach a president.”

Short of impeachment, the 67-year-old president will probably face fresh protests and a further decline in her popularity rating in coming months as the economy shrinks and the cost of living rises, Garman said by phone.

Analysts expect gross domestic product to contract 0.8 percent this year, while prices jump by almost 8 percent, according to a central bank survey published Monday in Brasilia.

Rousseff’s rating has plummeted by 19 percentage points since December to 23 percent, according to a Datafolha poll conducted Feb. 3-5. More than three-quarters of the 4,000 respondents believe Rousseff knew about a kickback scheme at state-run oil producer Petroleo Brasileiro SA. An investigation by the prosecutor-general is implicating legislators and executives of some of Brazil’s largest companies.

Rousseff’s ability to deflate the crisis will depend on her ability to manage growing opposition to federal spending cuts and to patch up a strained relationship with her main coalition partner the PMDB party, said Ricardo Ribeiro, political analyst at Sao Paulo-based consulting firm MCM Consultores. Several PBMD leaders are themselves the target of the corruption probe.

“Impeachment is not the most likely scenario, but it’ll remain on investors’ radar screens,” Ribeiro said in a telephone interview. “The impact of the austerity measures and the worsening of the economy haven’t been felt yet.”

Under Brazil’s constitution, two-thirds of the lower house of Congress must approve impeachment proceedings, with the supreme court called in to make a final ruling in the case of criminal charges. If the accusations are for “responsibility,” such as neglect, the Senate rules.

Should Rousseff be removed from office, Vice President Michel Temer of the PMDB party would take over.

If the ticket on which both Rousseff and Temer ran is annulled before the end of 2016, because of illegal campaign financing for example, new elections would be called. Thereafter, Congress would appoint a new president to carry out the remainder of the term.

Rousseff, who was chairman of Petrobras between 2003 and 2010, has not been accused of criminal wrongdoing and no evidence has surfaced that she knew of or was directly involved in the scheme. The prosecutor general said the president can’t be held responsible during her current mandate for acts preceding it. She denies any wrongdoing.