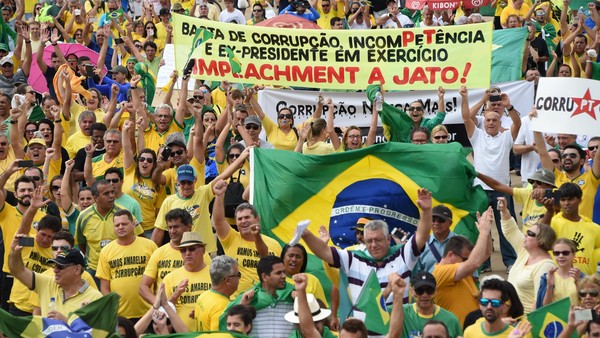 The treasurer of Brazil’s ruling Workers’ party has been formally charged over the Petrobras corruption scandal, dealing a huge blow to President Dilma Rousseff only a day after anti-government protests swept the country.

Brazil’s federal prosecutors said on Monday they have sufficient proof that João Vaccari solicited donations from Renato Duque, Petrobras’s former director of services, and other executives at construction companies as part of a vast kickback and bribery scheme.

“He participated in meetings with Duque, Barusco [a former Petrobras executive] and businessmen to deal with bribes and he would indicate the accounts where deposits should be made,” prosecutors said in a statement.

Mr Vaccari has denied any wrongdoing, while the PT party has said that all the donations it has received were legal.

Alongside the PT’s treasurer, prosecutors announced charges of corruption, money laundering and criminal conspiracy against 26 other individuals, some of whom have already been indicted on earlier charges.

Mr Vaccari was called in for questioning in February after his name emerged in the testimonies of former Petrobras executives who struck plea bargains with investigators.

Ms Rousseff has denied any involvement in the alleged scheme. While there is no evidence she was even aware of the corruption racket at Petrobras, she was chair of the company’s board from 2003 to 2010 when much of the graft allegedly took place.

More than one million Brazilians took to the streets across the country on Sunday in disgust over the scandal, many calling for Ms Rousseff’s impeachment. 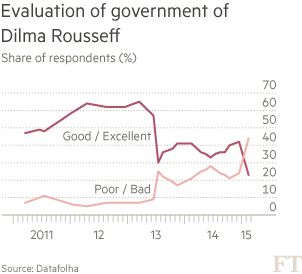 Prosecutors believe that for much of the past decade Petrobras executives conspired with the country’s largest construction companies to cream billions of dollars off contracts. According to the allegations, which emerged last year when a former Petrobras director struck a plea bargain with investigators, this cash was then allegedly used to pay bribes, fund the lavish lifestyles of those involved and finance politicians.

Brazil’s Supreme Court this month announced it would investigate the speakers of both houses of Congress and more than 30 other congressmen and senators over the scandal — all but one of whom are from the PT and its coalition allies.

While corruption is commonplace across Brazil, the sheer scale of the scheme — believed to be the biggest corruption scandal in the country’s history — has outraged the country.

However, in spite of the large turnout at Sunday’s demonstrations, analysts said that it was still unlikely that Ms Rousseff would be impeached over the scandal.