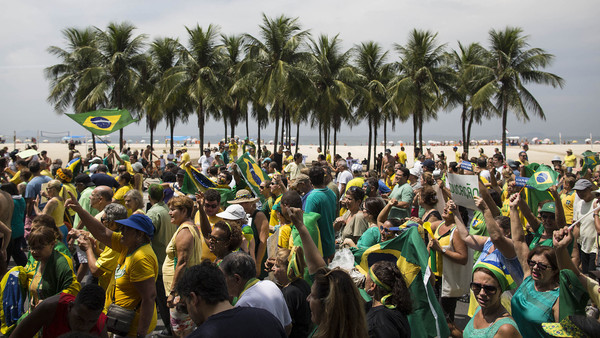 Protesters on the march at Copacabana beach in Rio de Janeiro on Sunday. There were demonstrations all over Brazil

More than a million protesters took to the streets of Brazil on Sunday to call for the impeachment of President Dilma Rousseff, as anger intensifies over increasing economic hardship and the multibillion-dollar corruption scandal at state oil company Petrobras.

Tens of thousands of demonstrators swarmed around ministerial buildings in the capital Brasília, along Copacabana beach in Rio de Janeiro, and other major cities across at least 25 of Brazil’s 26 states. More than 1m people protested in São Paulo alone — equivalent to one in 20 people in the city’s greater metropolitan region, according to military police.

Families, the elderly and activist groups — many dressed in Brazil’s national green and yellow colours — waved flags and balloons, held up banners against the government and sung the national anthem in what was largely a peaceful protest.

“Dilma and her PT party have taken away any pride I had in being Brazilian — I want to be proud of my country again,” said Wagner Pugliese, the owner of a petrol station who held a sign calling for Ms Rousseff’s impeachment.

Others simply called for the end of corruption across all political parties. “I’m tired of corruption — we’re all tired of paying high taxes and seeing no return for society,” said Cristina Araújo, a systems analyst.

The demonstrations, which had been planned for weeks through social media and which were expected to attract only a quarter of a million people, come only three months into Ms Rousseff’s second term. While analysts say her impeachment is still unlikely, the protests will add to a climate of political instability that has pushed Brazil’s currency to a 12-year low and make it even harder to introduce the painful austerity measures needed to correct Brazil’s deteriorating fiscal situation.

“They will set the tone as to the level of popular discontent and mobilisations that Rousseff will confront in the coming months,” said João Augusto de Castro Neves of Eurasia Group, a political risk consultancy. “More important than [Sunday’s turnout] will be whether these protests lead to a more sustained . . . movement, including that of organised labour,” he said, pointing to recent strikes by truck drivers.

Three weeks ago, truck drivers set up roadblocks across a third of the country in a protest over higher fuel taxes, among other costs, leaving supermarket shelves bare and disrupting soyabean shipments. The government was forced to give in to most of their demands.

“Episodes like these will only become more common as the fiscal adjustment hits the labour market and threatens benefits to special interests,” said Mr Castro Neves.

Since Brazil recorded its first primary budget deficit in more than a decade last year, Ms Rousseff has tried to introduce tax and benefit cuts to correct the country’s fiscal policy and retain the country’s prized investment-grade credit rating. She has met tough resistance, however, not only among ordinary Brazilians but also from coalition parties in Congress, which has been paralysed by infighting over the Petrobras scandal.

Last week, Brazil’s Supreme Court announced it would investigate the speakers of both houses of Congress and more than 30 other congressmen and senators — all but one of whom are from Ms Rousseff’s ruling PT party and its coalition allies.

Prosecutors believe that for much of the past decade Petrobras executives and the country’s largest construction companies conspired to cream billions of dollars off Petrobras contracts, part of which was used to fund political parties. Ms Rousseff, who has denied any involvement in the scheme, was chairman of Petrobras when much of the alleged graft took place.

Brazilians are also outraged by poor public services and rising inflation, which hit the highest level in a decade in February even as the country is on course for another technical recession this year.

Many states are also struggling with water shortages and the possibility of energy rationing after the country’s worst drought in 80 years.