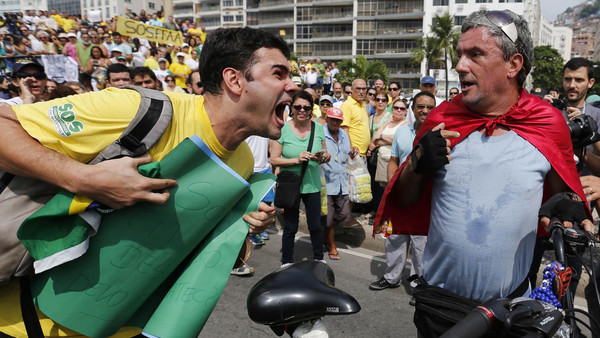 Among the estimated 1m Brazilians who took to the streets of São Paulo on Sunday to call for Dilma Rousseff’s impeachment over the Petrobras corruption scandal, it is people like Maria Pereira who will cause the president most concern.

Unlike the protesters who line up to buy kebabs from Ms Pereira’s makeshift stall on the city’s Paulista Avenue, the 50-year-old actually voted for Ms Rousseff in the presidential elections last year. However, she already regrets it — not because of Petrobras, she says, but because of the rising price of the meat she is selling and the suspected tumour in her neck.

“I’ve had this lump for three years now and I finally went to the hospital to have it examined but they said they are full and that I should come back when it’s more urgent,” she says, as groups of elated protesters bustle past, chanting anti-government slogans and waving flags.

While Petrobras was the focus of mass protests that swept across Brazil on Sunday, it is more mundane issues such as healthcare and inflation that will determine Ms Rousseff’s support among the poor — her core voters — and decide her fate and that of the ruling PT party, analysts say.

After rising from poverty over the past decade, Brazil’s new middle classes now face an uncertain future as the country struggles with a toxic combination of economic contraction, rising prices and the country’s first primary budget deficit in more than a decade.

“It may have been the wealthier Brazilians who were out protesting but Rousseff is losing support among all levels of society,” says Rafael Alcadipani, an academic at the Getulio Vargas Foundation (FGV).

In São Paulo, Brazil’s business hub and an opposition stronghold, more than 1m people took to the streets on Sunday, according to the military police. Hundreds of thousands of demonstrators joined protests across Brazil’s other 25 states and the capital city Brasília. Brazil’s Globo television network estimated that more than 2m people came out to protest across at least 160 cities, while other organisations said the attendance was lower, with polling firm Datafolha calculating only 210,000 protesters in São Paulo.

Unlike the mass protests in June 2013, Sunday’s demonstrations largely had one objective: the impeachment of Ms Rousseff over the multibillion dollar bribery and kickback scheme at Petrobras. Brazil’s Supreme Court this month said it would investigate the speakers of both houses of Congress and more than 30 congressmen and senators from the ruling coalition over their alleged involvement in the scandal, whereby contracts were allegedly inflated to pay bribes and fund political campaigns.

However, while the impeachment process partly depends on political pressure from voters and Congress, it would also require concrete evidence proving Ms Rousseff’s direct involvement in the scheme, analysts say. Ms Rousseff was chair of Petrobras from 2003 to 2010 but she has not been accused of any wrongdoing.

“While [Sunday’s] large turnout justifies our assessment that the likelihood of an impeachment stands at 20 per cent — a number which we don’t consider low — we also wouldn’t raise those odds just because of a high turnout,” says João Augusto de Castro Neves of Eurasia Group, a political risk consultancy.

The Brazilian Democratic Movement Party (PMDB), the biggest party in Ms Rousseff’s coalition, would also probably prefer to keep her in power to avoid being held responsible for the country’s multitude of problems, says FGV’s Mr Alcadipani.

“The PMDB will probably just make her bleed until she is really weak and then they can run the country themselves — they don’t actually need to get rid of her, nor would it be the smartest thing to do,” he says.

For many, the governability crisis facing Ms Rousseff was inevitable. The former leftist guerrilla was re-elected in October by one of the narrowest margins in the country’s history in a vote that divided Brazil along geographical and class lines. While the wealthier south largely voted for the business-friendly PSDB party, poorer northern states remained loyal to the PT.

The corruption scandal at Petrobras has only made Ms Rousseff’s job harder by further outraging her opponents, who reacted with scepticism to a “package of anti-corruption measures” promised by the government late on Sunday in response to the protests. The scandal has also alienated the PT’s allies, making it even harder to persuade congress to support last-minute efforts to avert a fiscal crisis.

In a surprise decision this month, senate president Renan Calheiros of the PMDB party rejected a presidential decree to raise payroll taxes — an apparent act of retaliation for not clearing his name from the corruption probe. Fears that similar moves will scupper the austerity efforts of Brazil’s new market-friendly finance minister, Joaquim Levy, have helped send Brazil’s currency to a 12-year low against the dollar.

Meanwhile, convincing Ms Pereira and the PT’s other target supporters that the government needs to cut public spending at a time when politicians are accused of getting rich at the taxpayer’s expense, may prove equally impossible, analysts say.

“Maybe Lula, [Luiz Inácio Lula da Silva, the former president], was also corrupt but at least he shared his riches with us,” says Ms Pereira. “Dilma has given us nothing.”