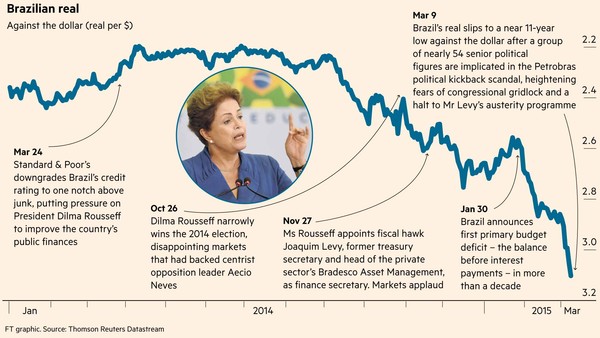 When Brazil’s central bank met in late January to consider increasing interest rates, it predicted the currency, the real, would hover at R$2.65 to the dollar for the next two years.

On Monday, the currency closed at about R$3.12 against the dollar, near an 11-year low after weakening 15 per cent so far this year.

The once mighty real — only a few years ago Brazil was fighting a “currency war” to keep it from appreciating against the dollar — has been hit by a scandal at state-owned oil company Petrobras and a deep slowdown in Latin America’s largest economy.

So great has been the real’s depreciation that analysts are beginning to question whether the currency, and Brazilian assets in general, are nearing the bottom. After all, Brazil may be slipping into recession but it is not at risk of an economic crisis, not yet at least. Meanwhile, help is on the way in the form of the country’s new more orthodox finance minister Joaquim Levy, a respected technocrat with market experience, who joined the government in January and is determined to set Brazil`s finances back in order.

“The future is looking better now than it was before,” says Fernando Honorato Barbosa, chief economist at Mr Levy’s former employer, Bradesco Asset Management, or Bram. “We know him [Mr Levy] and he’s tough when he wants something.”

Such optimism may seem out of step with a market that is in no mood to give Brazil and its centre-left government headed by President Dilma Rousseff the benefit of the doubt.

After a decade in which the economy was relatively well managed, Ms Rousseff, who took office in 2011, and her previous finance minister, Guido Mantega, began a programme of fiscal largesse in 2012.

The government’s stated object was to provide a stimulus to counter the eurozone crisis and the end of the commodities supercycle. But the programme, which included price controls for fuel and energy, ad hoc tax breaks for industry and increased credit from state-owned banks, only seemed to pump up inflation.

Growth sank as did investment, which most economists argue is desperately needed to increase the capacity of Brazil’s economy to serve the demands of its expanding middle class.

The stimulus programme did help preserve jobs, however, winning Ms Rousseff re-election for a second term in October last year in one of the most closely fought campaigns in decades. But it also left Brazil in 2014 with its first primary fiscal deficit — the deficit before interest payments — in more than a decade, along with the threat that its treasured investment grade credit rating could be downgraded to junk.

This was coupled with the emergence of the Petrobras corruption scandal, in which former directors of the state-owned oil company are accused of colluding with politicians, mostly from Ms Rousseff’s ruling coalition, to extract bribes from construction companies and other contractors.

The scandal has not only threatened to push Petrobras into a technical default, because its auditors cannot sign off on its accounts until the company can provide a credible estimate of its losses from corruption; it is spilling over into other sectors.

“Petrobras’ problems will negatively affect Brazil’s oil and gas production chain, its construction and infrastructure sectors, real estate in Rio de Janeiro state and the companies that support these sectors,” says Moody`s in a report.

Brazil’s poor economic performance has earned the country, once a proud member of the so-called Brics group of fast-growing emerging nations that also includes Russia, India, China and South Africa, membership of more dubious agglomerations, such as the “fragile five”.

These are the currencies of Brazil, Indonesia, India, Turkey and South Africa, which because of their large current account deficits are considered vulnerable to emerging market sell-offs as the US Federal Reserve considers raising interest rates.

The good part is Mr Levy is from the financial markets. He’s the depositary of market confidence in this government.

Brazil, Turkey and South Africa are considered more exposed than the others because of their lack of reforms, says Capital Economics economist David Rees in a research note.

“These currencies will remain vulnerable to bouts of risk aversion as we edge towards rate hikes by the Fed,” Capital Economics says.

But while the bad news continues to pile up for Brazil — alongside the real, the Ibovespa benchmark stock index dropped 1.6 per cent to 49,181 points on Monday — many market analysts are quietly upbeat in São Paulo.

The cause of their gritty optimism is the Levy factor — the opinion, expressed by Mr Barbosa of Bram that the Chicago-trained finance minister will be able to pull off an austerity programme to restore Brazil’s fiscal balance against the odds.

Not only that, they say, Mr Levy is also in charge of ensuring that Petrobras sorts out its accounts in time for a deadline in June.

Mr Levy`s programme to cut expenses and raise taxes to create a primary budget surplus this year of 1.2 per cent suffered a setback last week when Congress blocked one of his initiatives. But he is expected to be able to meet most of his targets without Congressional help.

“The good part is Mr Levy is from the financial markets,” says Alexandre de Azara, chief economist at Modal Asset Management in São Paulo. “He’s the depositary of market confidence in this government.”