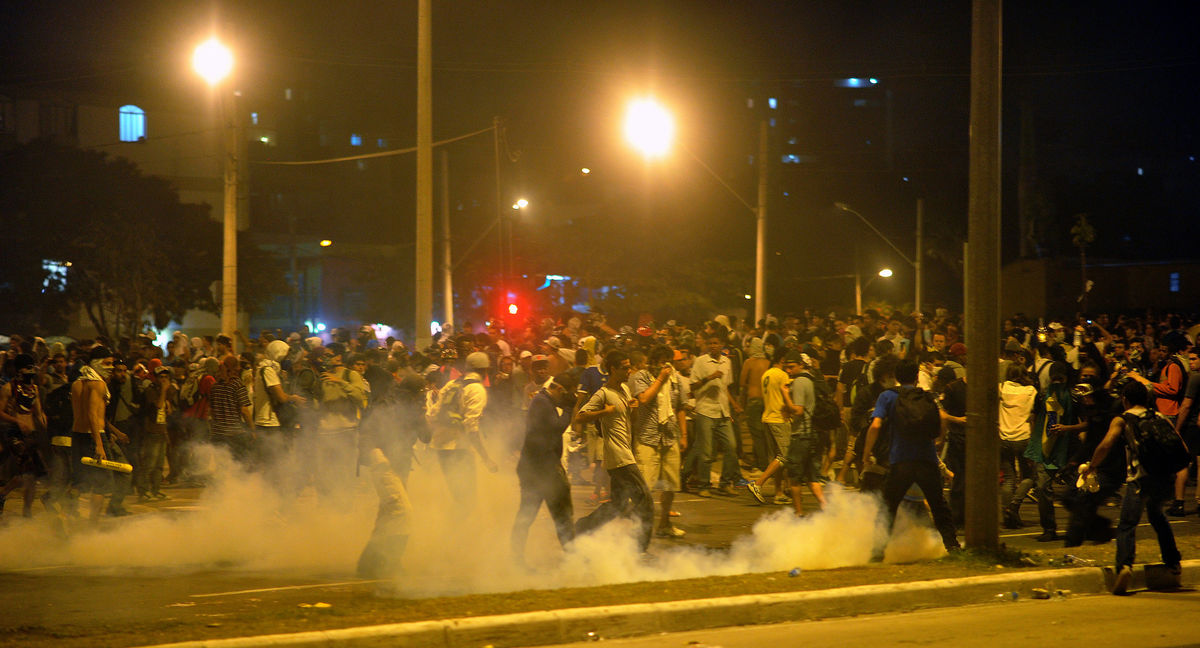 Anti-government protesters demonstrate during clashes with the police outside the Mineirao stadium in Belo Horizonte. Photographer: Christophe Simon/AFP via Getty Images

(Bloomberg) — When Brazil’s President Dilma Rousseff won re-election in October, she pledged to crack down on corruption and end the tradition of impunity. Now some advocates of such change are themselves being swept up in the country’s largest graft scandal.

The Supreme Court as soon as Friday is expected to authorize investigations into dozens of politicians, including leading lawmakers, for their role in an alleged scheme of kickbacks from contractors of state-run oil company Petroleo Brasileiro SA.

Even after the biggest protests in two decades demanded a tougher stance on corruption in 2013, politicians have made little progress in advancing an anti-graft agenda, and the commotion from investigating so many legislators will create further gridlock, said Josmar Verillo, head of the board of Amarribo, a Sao Paulo-based ethics advocacy group.

“If our political and corporate leadership is compromised with this system of corruption, how are they going to lead us out of it?” Verillo said in a telephone interview. “There’s entrenched opposition and, I’m afraid, only sustained popular protests will be able to shake things up.”

Two months later the head of the Federal Court of Accounts, which probes government contracts for irregularities, resigned, saying his organization was underfunded.

A 2013 anti-corruption law that increases penalties and holds businesses more accountable has no bylaws yet, and coalition partners in Congress wrangle over rival bills to make politicians more accountable to their constituencies and restrict their campaign donations.

One such proposal came from Eduardo Cunha, head of the lower house of Congress, who is among the politicians to be investigated by the public prosecutor’s office, the country’s leading newspapers, including O Globo, reported this week. Cunha said he doesn’t comment on speculation.

The presidential press office declined to comment when asked in an e-mail about Brazil’s failure to approve tougher anti-corruption legislation.

Part of the kickbacks allegedly paid by contractors in the Petrobras case went to legislators and political parties, including as much as $200 million to the ruling Workers’ Party, according to Pedro Barusco, a former Petrobras services manager who made a deal to turn state’s witness.

The party has said that all contributions were within the law.

Campaign donations by companies seeking favors from politicians are at the heart of corruption schemes like the one at Petrobras and ought to be banned, according to the Organization of Brazilian Lawyers, or OAB, the equivalent of the American Bar Association.

The OAB last year presented presidential candidates with a plan to combat corruption that would make it a crime for parties to accept undeclared donations. The proposal also would restrict anybody with a criminal record from becoming a civil servant, increase funding of state watchdog agencies, and professionalize public services with stricter hiring criteria.

Brazil ranks 69th out of 175 countries in Transparency International’s 2014 Corruption Perceptions Index. While Brazil has adequate public procurement laws, “companies are likely to experience demands for bribes or other irregularities in public contracting,” the group says on its website.

Congress and the government are also failing to address one of the biggest causes of corruption — political appointments to state companies and agencies, said Claudio Abramo, head of Transparency Brasil, an independent, Sao Paulo-based watchdog group.

“Politicians have usurped the state apparatus, creating an open door for all sorts of malfeasance,” said Abramo, adding that coalition partners traditionally fight for control of ministries with the biggest project budgets.

In Brazil the federal government appoints nearly 23,000 public officials, according to the Planning and Budget Ministry. That compares with 9,000 in the U.S., 500 in Germany and France, and 300 in Britain, according to Transparency Brasil.

“Why would a political party want to control the Transport Ministry or a state power company — because of ideology?” said Abramo.