PERSON IN THE NEWS 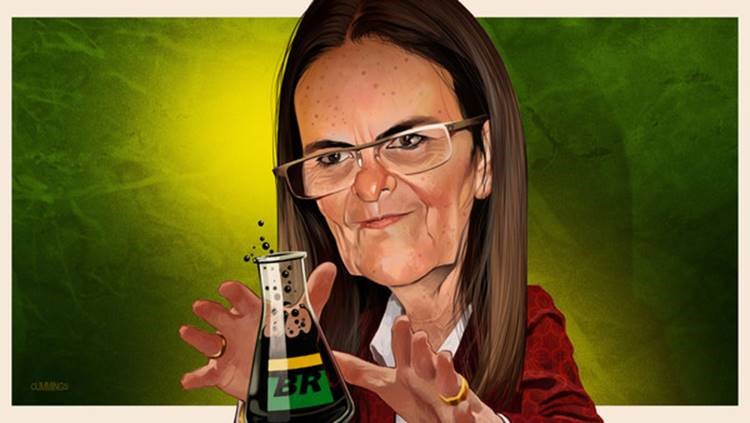 Maria das Graças Foster is no average Brazilian executive. For a start, the chief executive of Petrobras is a woman — in fact, the first woman to lead an oil major. Nor was she born into a life of privilege but raised in one of Rio de Janeiro’s most dangerous slums. After collecting scrap metal for cash as a child, she joined Petrobras as an intern in 1978 and accumulated an encyclopedic knowledge of Brazil’s state-controlled oil producer that would put any boss to shame.

It is a remarkable career path but one that looks likely to end in a sadly familiar way by Latin American standards: with a corruption scandal. Over the past few months, Petrobras has become engulfed in the largest bribery and kickback investigation in Brazil’s history. Prosecutors believe that for much of the past decade, Petrobras executives conspired with Brazil’s largest construction firms to inflate the oil company’s contracts, stealing billions of dollars to fund lavish lifestyles, pay bribes and funnel money to politicians, largely from the ruling Workers’ party.

While Ms Graças Foster has not been accused of involvement in the scheme, the straight-talking 61-year-old has repeatedly offered her resignation to President Dilma Rousseff. “The president thought I should stay,” she told reporters bluntly in December. The reality, analysts say, is that no sane executive would be willing to take over the company in its current uncertain state.

As well as facing a Securities and Exchange Commission investigation in the US, Petrobras remains cut off from capital markets and risks technical default after its auditors PwC refused to approve its accounts in November. “Any potential candidate to replace Ms Graças Foster would be wary of coming on before the current executives sign off the damage,” says João Augusto de Castro Neves of Eurasia Group, a political risk consultancy.

The scandal — dubbed “Car Wash” as petrol stations were allegedly used to launder some of the money — is not only a sorry turn of events for Ms Graças Foster but also for Petrobras and Brazil itself. After winning respect for its technological prowess and becoming the envy of the global industry in 2007 by making the largest offshore oil discoveries in decades, Petrobras may soon have to resort to a government bailout. Similarly, after wowing investors with 7.5 per cent growth in 2010, Brazil once again finds itself an object of ridicule in international markets as the corruption scandal threatens to deepen an expected recession this year. As former president Fernando Henrique Cardoso wrote in his memoirs, “hope followed by disappointment is a particularly Brazilian cycle”.

Ms Graças Foster, a towering and somewhat gaunt figure, never appeared to harbour any illusions about the challenges that lay ahead when she became chief executive in February 2012.

When asked in an FT interview that year about her ascension up the Petrobras ranks, she replied: “Power doesn’t come by itself, it comes with responsibility and it’s the responsibility I live with, which weighs on me, which wakes me up at two o’clock in the morning, takes me away from my friends, and makes me a more impatient and irritable person”. Despite having the vestiges of a personal life — a husband, two children, a granddaughter, and a love of cats and cooking — she has been quoted as saying she would “die” for the company that transformed her life.

New York and São Paulo quoted Petrobras itself was already in trouble when she took charge. Covert fuel subsidies to help the government battle inflation were costing the company billions of dollars and there was little Ms Graças Foster could do to change a practice that enraged private minority investors. She and Ms Rousseff had been close friends since the president’s days as an energy official in the 1990s.

Some say the weight on Ms Graças Foster’s shoulders was, in fact, the knowledge of a vast corruption scandal that had yet to come to light. Venina Velosa da Fonseca, a former Petrobras manager, said during a tearful television interview last month that she had warned several directors of inflated contracts in 2008, including Ms Graças Foster who was head of the gas and energy division at the time. Ms Graças Foster has vehemently denied she was aware of the scheme and Petrobras said it has been taking all necessary measures to investigate alleged irregularities.

Whistleblower tales, along with rumours of death threats and money hidden in buried swimming pools have gripped Brazilians like a sordid soap opera, prompting both despair and fascination. But in two weeks’ time, many will finally get the chance to vent their frustration over the scandal in a typically Brazilian way — by dressing up for Carnival. Masks modelled on Ms Graças Foster’s face are expected to sell out.

Her no-nonsense management style has won her the nickname “the tank”, but Ms Graças Foster also knows how to have fun — a big rock fan, she once admitted to having tattoos in “places you can’t see with clothes on”, according to state-owned broadcaster EBC.

Yet, she is unlikely to see the funny side this Carnival. More than most, Ms Graças Foster understands the struggles of Brazil’s less fortunate and that their capacity to accept perennial disappointment has limits. Protesters have taken to the streets to demand Ms Rousseff’s impeachment over the scandal — a proposition that is gaining some sympathy in the country’s increasingly dissatisfied Congress. Ms Rousseff, who was chair of Petrobras when much of the graft supposedly took place, has denied any involvement in the alleged scheme.

If the protesters get their way, Brazil’s two first ladies may soon both be out of a job.

The writer is the FT’s Brazil correspondent