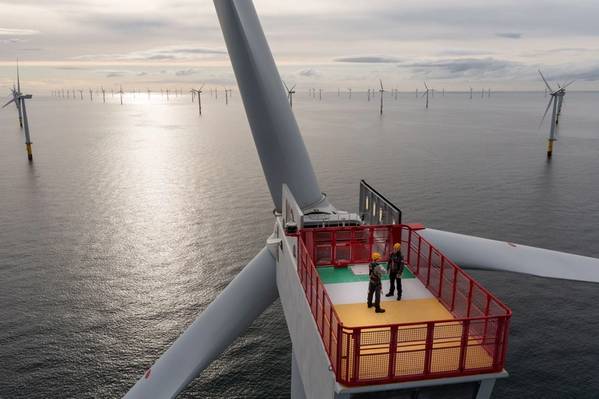 These project could start generating electricity by the end of the decade and have the potential to generate c.8GW of electricity, enough for more than seven million homes.

Three of the six projects are located off the North Wales, Cumbria and Lancashire coast, and three are located in the North Sea off the Yorkshire and Lincolnshire coast.

Under the agreements for lease, The Crown Estate receives an annual option fee from each project developer, until they are ready to enter into a lease for the seabed site. The option fee sum was determined by the project developers themselves through an open market process to ensure fair value for seabed rights was captured.

Option fees will contribute toward The Crown Estate’s net revenue profit, 100% of which is paid to HM Treasury for the benefit of the nation.

“The total commitment across all six projects is approximately £1 billion per year, reflecting the confidence in the UK’s world leading offshore wind sector and Government’s commitment to grow the low carbon economy,” the Crown Estate said.

The term of the Agreement for Lease is for a maximum of ten years. Successful bidders have committed to at least three years of option payments by entering into the Agreement for Lease, and the option payments reduce as a project moves into a lease, or leases, and cease when a lease(s) for the maximum capacity/whole site is granted, at which point developers will move to paying rent.

“Following The Crown Estate’s final decision to proceed in August 2022, the agreements are the culmination of The Crown Estate’s Offshore Wind Leasing Round 4, adding further strength to the offshore wind sector’s track record in leading the UK’s net zero energy transition.

“Round 4 follows three previous leasing rounds by The Crown Estate which, along with investment in cutting-edge data and evidence and a commitment to increasing collaboration across sectors, has paved the way for the development of a world-class offshore wind market in the UK, with The Crown Estate having now awarded rights totalling 41GW,” the Crown Estate said.

“With agreements signed, developers can now further progress their plans for the projects which have the potential to make a major contribution to delivering sustainable, renewable energy for the UK, as well as the Government’s target of 50GW of offshore wind capacity by 2030,” the Crown Estate said.

Dan Labbad, CEO of The Crown Estate, said: “The UK’s offshore wind achievements to date are nothing short of remarkable, and this next generation of projects point to an even more exciting and dynamic future.

“They demonstrate the far-reaching value that our world-class offshore wind sector can deliver for the nation: home grown energy for all, jobs and investment for communities, revenue for the taxpayer, clean energy for the benefit of the environment and a considerate, sustainable approach which respects our rich biodiversity.

“Moving forward, working with our stakeholders to continue unlocking this value is what drives us, and we are more committed than ever to lead the way in ensuring this important benefit is realised for our environment and for the nation.” 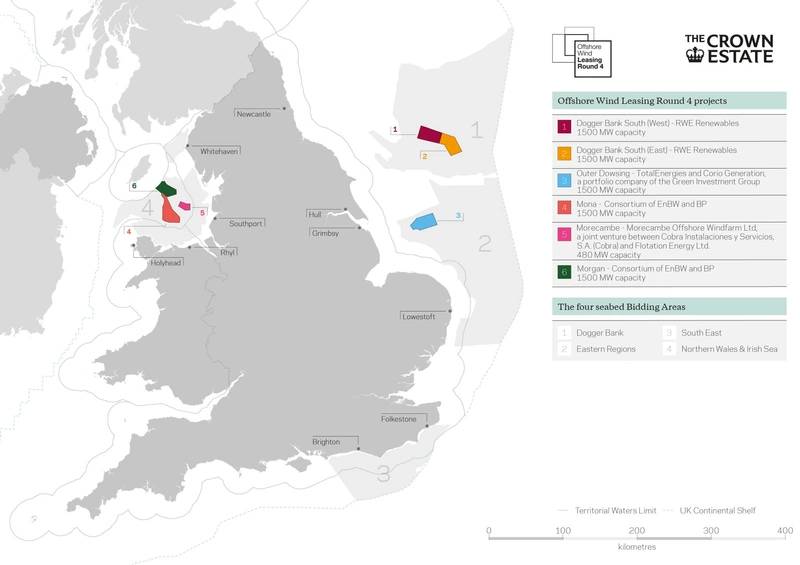 The Crown Estate said it would “now lead a pioneering programme of work to oversee the development of strategic environmental compensation plans for two protected sites, ensuring that the health of the natural marine environment remains at the centre of development plans.”

It said this was in response to a rigorous assessment of the potential impacts of Offshore Leasing Round 4 on the most valuable environmental habitats in the UK, and a commitment to ensure that environmental compensatory measures are put in place to offset the predicted impacts on two protected sites (the Dogger Bank Special Area of Conservation and the Flamborough and Filey Coast Special Protection Area).

The Crown Estate will establish a Steering Group for each of the protected sites, comprising government and statutory nature conservation bodies and the relevant project developers, which will drive the development of the detailed plans to ensure appropriate delivery of the commitments made by The Crown Estate through its plan-level HRA.