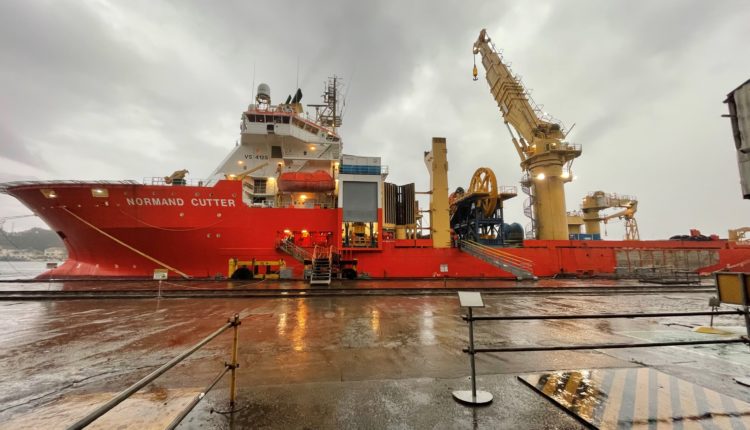 Oil and gas company Ocyan announces the arrival in Brazil of the Solstad vessel, the “Normand Cutter”, which under its management will carry out the decommissioning activities of Petrobras’ underwater structures in the Campos Basin (Rio de Janeiro) and Sergipe- Alagoas, in a contract won last year.

“This is the first decommissioning contract for offshore production fields in Brazil and we can say that we are at the forefront of this activity in our national production chain. The experience we will acquire with the project will give us great expertise. This project marks Ocyan’s resumption in the subsea construction area. We envision a promising future with new opportunities in other companies, including international operators”, celebrates André Luiz Magalhães, executive manager of Subsea Construction at Ocyan.

The “Normand Cutter” is an offshore construction vessel (OCV), has a length of 127.5 meters and has a crane with a lifting capacity of 300 tons, in addition to a system for launching flexible pipelines of up to 100 tons and pipeline storage of up to 1250 tons. The capacity of the ship is for a crew of 114 people, with the Ocyan team on board having approximately 23 people.

The vessel was in Norway, from where it left for Scotland, where the collection and launch systems for pipelines were installed. It then began its journey to Brazil on December 12, 2022. As of the second half of January 2023, the vessel will carry out the first equipment collection campaign in the Campos Basin, where it will operate for two weeks and unload the structures in Vitória (ES). At the end of this first stage, still in Espírito Santo, it will carry out the last stage of installing the equipment – rollers and coils for storing flexible ducts – necessary for the continuation of the project.

“ In February, the Normand Cutter starts operating definitively in the Campos Basin, collecting structures from the FPSO “Cidade do Rio de Janeiro” and FPSO “Cidade de Rio das Ostras”, and in the second half, it starts work in the Sergipe Alagoas Basin, in the FPSO Piranema area. All material will be treated and sent for recycling. The contract’s offshore services will last approximately a year and a half and the milestone was initiated while still in Scotland, during the installation of the equipment”, explains the executive.

“For Ocyan, having this vessel in its fleet is strategic and will open a window of opportunity for new subsea construction contracts. From now on, we can look for other projects that require this asset as a working tool for activities in this area. This vessel will make it possible to carry out more than one project at the same time”, points out Rafael Guigon, director of Subsea Construction Contracts at Ocyan.