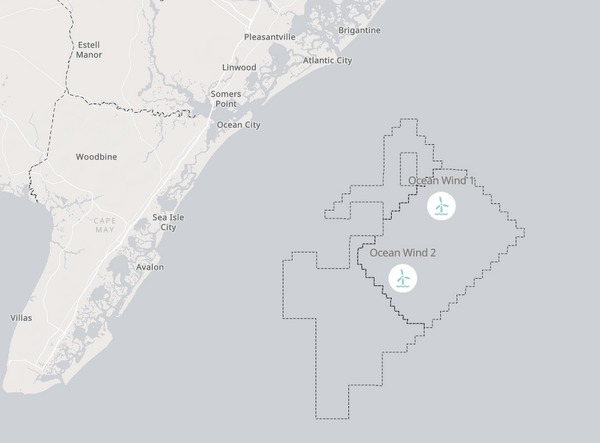 The acquisition gives Ørsted complete ownership of Ocean Wind 1. The transaction between Ørsted and PSEG is expected to close in the first half of 2023, pending the required closing conditions.

“As Ocean Wind 1 continues its planning and development, Ørsted will ensure the project delivers affordable energy to New Jersey, while providing economic opportunity across the state and region. PSEG will support onshore infrastructure construction,” Orsted said.

Ocean Wind 1 has committed to $695 million of in-state spending, creating hundreds of jobs during the construction phase of the project, Ørsted said.

In addition to building an operations and maintenance facility in Atlantic City, NJ, Ørsted says it has invested more than $100 million to help establish the first American monopile facility at the Port of Paulsboro in New Jersey, committed over $20 million to the Pro-NJ Grantor Trust, established a North American Digital Operations headquarters in Newark and partnered with the New Jersey Institute of Technology on a $1.5 million, 10-year scholarship program.

“PSEG has been a valuable partner as we have advanced Ocean Wind 1 to this point and as we’ve successfully advanced our offshore wind vision in the United States. With a well-established presence in the U.S., we’re confident in our ability to drive the project forward with commercial operations beginning as planned,” said David Hardy, Group EVP and CEO Americas at Ørsted.

Ørsted has 30 years of experience in offshore wind energy, including operating the first U.S. offshore wind farm off the coast of Rhode Island.

“As the U.S. leader in offshore wind with 5 gigawatts in development, Ørsted is advancing the offshore wind industry supply chain, having stimulated more than $2 billion in U.S. investments to date,” Ørsted said in a statement,.

“As Ocean Wind 1 has evaluated the optimal way to move forward, it has become clear that it is best for the project for PSEG to step aside and allow for a better-positioned tax investor to join the project so that it can proceed with an optimized tax structure. While this was a difficult decision, it was driven by the best interests of the project and New Jersey’s offshore wind goals. PSEG will continue to actively support offshore wind in New Jersey and the region,” PSEG’s Senior Vice President and Chief Commercial Officer Lathrop Craig said.

The initial delivery of power from Ocean Wind 1 is scheduled for the end of 2024, and full commissioning is expected in 2025.