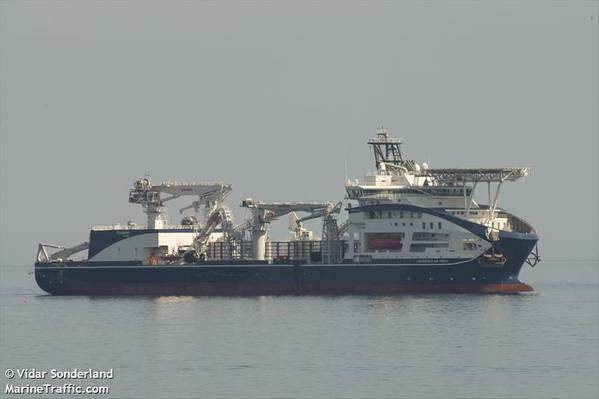 The installation work on the export cable for Vineyard Wind 1, the first commercial-scale offshore wind farm in the U.S., has now begun with Prysmian’s cable laying vessel (CLV) Cable Enterprise set to start installing the offshore part of the project’s link to the grid on land after a pre-lay grapnel run.

According to the AIS data available online, Cable Enterprise arrived from Falmouth, the UK, to the Port of Providence on 21 October.

Before the CLV starts the cable laying operations, the tug Nicole Foss will perform a pre-lay grapnel run (PLGR) along the offshore cable corridor to ensure no new debris has fallen on the site since the clearing operations in the late summer.

After completing the offshore PLGR at the site, the tug will move to the nearshore section of the export cable route, beginning just offshore of Covell’s Beach, Barnstable, and commence the PLGR operation for that section, which runs across Nantucket Sound out to the Cape Poge area.

The Nicole Foss vessel, together with the tug Norne, will also support the cable laying work by performing anchor handling for the operations.

The export cable for Vineyard Wind 1 is being supplied and installed by Prysmian under a €200 million contract awarded in 2019 and given the final go-ahead after the project reached financial close last year.

Once fully operational, the 819 MW wind farm will generate enough electricity for more than 400,000 homes and businesses in the Commonwealth of Massachusetts.

The project is being built by Vineyard Wind, a joint venture between Avangrid Renewables, a subsidiary of Iberdrola, and Copenhagen Infrastructure Partners (CIP). In August this year, Avangrid finalised an agreement to assume responsibility as the operations and management services provider for Vineyard Wind 1.