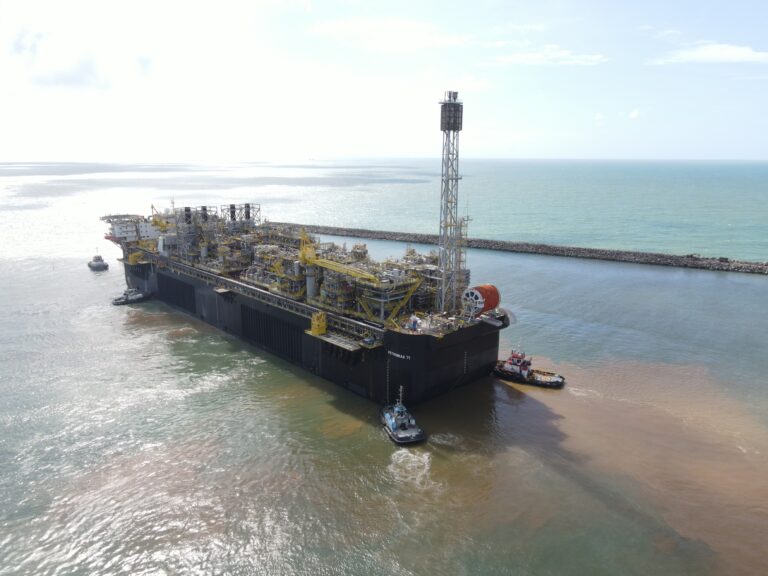 The FPSO P-71 left the Jurong Aracruz shipyard, in Espírito Santo, and headed for the Itapu field, in the Santos Basin. The vessel will be able to produce up to 150,000 barrels of oil and 6 million cubic meters of gas daily. In addition, the P-71 will be able to store 1.6 million barrels of oil. Petrobras predicts that the platform will come into operation in December 2022 and should reach its peak of production by the end of 2023.

As a reminder, the P-71 would initially be allocated in the Tupi field, in the pre-salt layer of the Santos Basin. Itapu, in turn, would receive another platform, which would be contracted by Petrobras. However, in October last year, the state-owned company’s plans changed. Petrobras announced the decision to cancel the bidding for contracting the Itapu platform and relocated the P-71 to the field.

The P-71 is a Petrobras own unit and will be the last of the Replicant series, also made up of P-66, P-67, P-68, P-69 and P-70. “These units have high production capacity, advanced operating technologies and emission reductions, with the same replicated engineering project”, detailed the oil company. The company also says that the ship has the FGRU (Flare Gas Recovery Unit) system, used to take advantage of the gas generated in the production process and reduce its burning and release into the atmosphere.

During its passage through the Jurong Aracruz shipyard, the platform underwent modification work on the FPSO’s topsides and hull to meet the requirements of the Itapu field. The hull conversion works, as is known, were carried out in China by CIMC Raffles. The Jurong shipyard was also responsible for the manufacture of six modules, pipe-racks and a flare, and their integration into the vessel along with other modules and items supplied by Petrobras.

“Despite the challenges related to the pandemic that affected the project over a period of 20 months, EJA successfully delivered the FPSO P-71 on schedule, cementing our status as a premier facility in Brazil, capable of taking on engineering, procurement and , construction and commissioning for large-scale offshore projects”, commented Jurong Aracruz president Thangavelu Guhan.