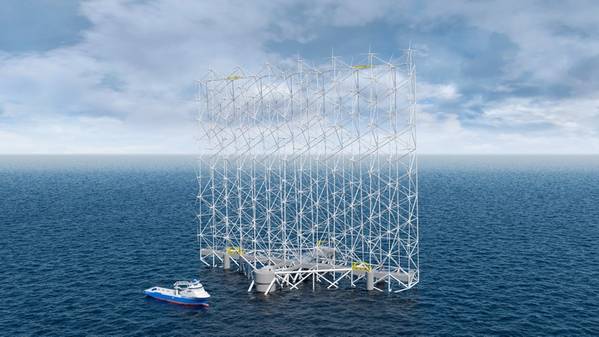 (OE) Norway-based Wind Catching Systems, a company behind the design of a multi-turbine floating wind platform, said Monday it had received a technology development grant of NOK 22 million (USD 2.1 million) from the Norwegian government agency Enova.

Wind Catching Systems is developing the Windcatcher, a floating wind power plant based on a multi-turbine design. According to the company, through having multiple turbines on a single floating platform – which could be as tall as the Eiffel Tower – Wind Catching Systems will maximize the energy production per floating structure while enabling a self-contained maintenance system eliminating the need for specialized vessels to support offshore maintenance operations.

“This project challenges the conventional technology for offshore wind. Our mission is to support technology development and we will follow Wind Catching Systems with interest going forward,” says Nils Kristian Nakstad, CEO of Enova SF, a government enterprise owned by the Norwegian Ministry of Climate and Environment.

Wind Catching Systems has been awarded a turbine development grant of NOK 22 million to support the design, construction and testing of a wind turbine pilot planned at Mehuken wind park on the West Coast of Norway. The turbine is planned to be installed in 2023 for testing and verification.

The Minister of Climate and Energy in Norway, Espen Barth Eide, is quoted in Enova’s press release, saying: “The government has great ambitions for offshore wind. If we succeed in lowering the cost of floating offshore wind, it could become an important source of renewable energy and represent a major opportunity for Norwegian industry. Therefore, we need projects like this, that contributes to technology development.”

In the development and testing phase Wind Catching Systems will cooperate with companies like Zephyr, Aibel, The Institute for Energy Technology (IFE) and DNV.

“This grant is a recognition of our technology, our partners and the team. The grant from ENOVA combined with the capital raised from our investors GM Ventures, Ferd and North Energy, will fully finance our turbine development program. This is an important step towards reaching our ambition of establishing floating offshore wind as a sustainable and competitive energy source by offering the most efficient technology,” says Ole Heggheim, the CEO of Wind Catching Systems.

According to Wind Catching Systems, with the Windcatcher, the company solves some of the central challenges facing floating wind; drastically
reducing acreage use per MWh of electricity produced while minimizing complexity and cost of operations and maintenance.