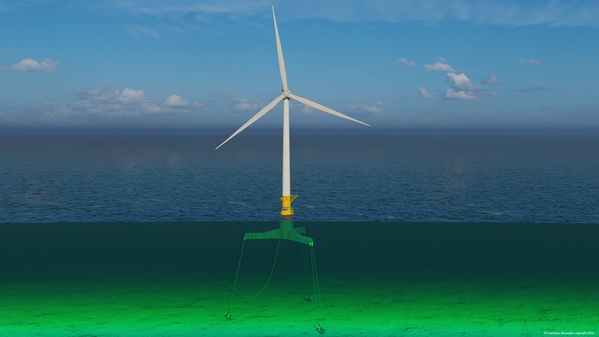 The Norwegian Marin Energi Testsenter (METCentre) and the Netherlands-based floating production specialist Bluewater have signed an agreement for a berth option to deploy an innovative floating wind system, offshore Norway.

The system is planned to be installed in the North Sea offshore Karmøy, Norway and will produce renewable energy into the Norwegian electricity grid.

Bluewater, known for its floating production storage and offloading leasing business, has developed the Tension Leg Platform (TLP) type floating foundation to support offshore wind turbines “cost effectively” and this project will showcase the solution in the deeper waters of the North Sea.

Bluewater’s floating wind TLP foundation has been developed for the industrial deployment of offshore wind turbines in floating wind farms, focused on harsh environments with the best resource.

According to the press statement, the TLP foundation is scalable, lightweight and supports wind turbines with minimal floater induced nacelle motions, and the tension leg mooring system has a small seabed footprint providing optimal use of the sea.

“We have pioneered floating production with our FPSO’s for several decades in the North Sea and now we are making a similar step with our floating offshore wind TLP,” says Bram Pek – Business Development Manager at Bluewater Energy Services.

“Norway has a very good resource for floating offshore wind farms and we believe that our technology can play a key role in achieving energy transition goals in Europe and the rest of the world.”

METCentre assists companies with facilities for the testing of new floating offshore wind technology. The test centre was recently awarded concession for extending the capacity for demonstration projects, which Bluewater will be operating under.

The test capacity at the center’s Karmøy site is six turbines and power export will be provided via a 66kV subsea cable.

“We look forward to contributing to and bringing the Bluewater’s demonstration project to life over the next few years. In order to ensure that the Norwegian industry has leading expertise in floating offshore wind in the future, we depend on such projects. The option agreement with Bluewater shows the need for such test centres that are capable of supporting such technology development to further reduce cost in floating wind,” concludes Arvid Nesse, CEO of METCentre.