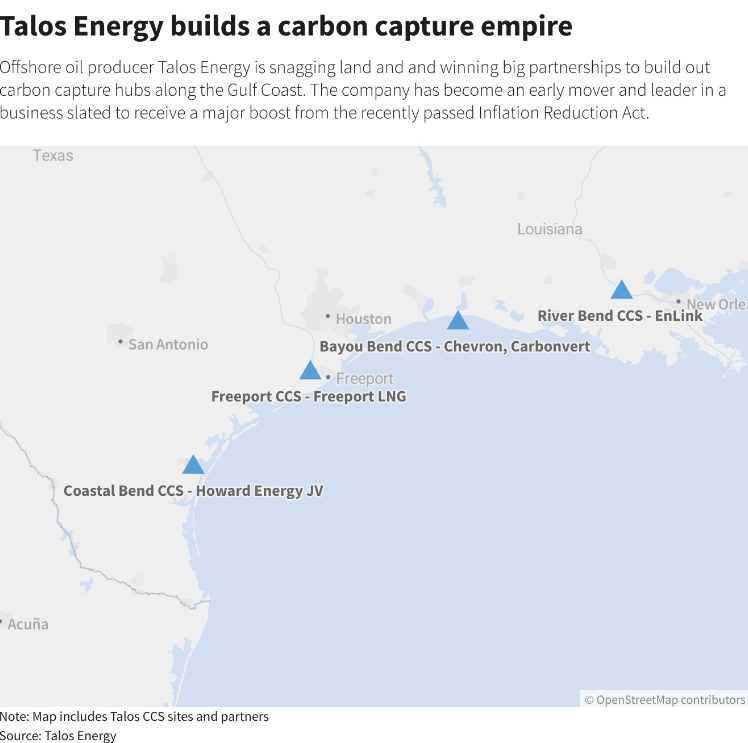 (Reuters) – The chief executive of a small U.S. oil company has jumped to the forefront of the energy industry’s greenhouse gas reduction efforts, recruiting high-profile firms to his vision of striking it big by selling access to carbon storage developments.

These alliances have made Duncan’s company one of the largest potential beneficiaries of the Biden administration’s climate, tax and health care bill. The law provides tax credits and cash payments for companies that target industrial-produced climate warming gases.

Duncan, whose company is tiny compared with Exxon and Occidental, views carbon capture and storage (CCS), which collects then injects carbon dioxide (CO2) deep underground at a carefully selected and safe site for permanent storage, as a natural extension of the oil and gas business.

“He is one of our fiercest competitors,” said Charles Fridge, chief executive of CCS startup Verde CO2, who left the oil and gas sector after losing a key investor to climate worries. “He is on the forefront compared to so many other public companies,” Fridge said.

Duncan has made Talos “a leader among public companies in building up a carbon capture unit,” said Fridge, whose Verde CO2 has five projects under development. Big companies have been plagued with “paralysis by analysis,” over CCS, slowing them from quickly adopting emerging technologies, he said.

Two years ago, Talos assembled a team to explore how to build out a low-carbon business, which realized its seismic data could pinpoint carbon sequestration sites as well as oil reservoirs. Duncan, who was part of several startups before launching Talos, began to examine carbon capture’s potential.

Today, he has a team developing four carbon capture projects scattered across the U.S. Gulf Coast.

“We had to take a leap of faith,” Duncan said in an interview with Reuters. “We have seismic, we know geology. Who else is going to do it?”

That epiphany led to deals with Chevron Corp (CVX.N), Freeport LNG, Howard Energy and pipeline operator EnLink (ENLC.N). Chevron paid $50 million for half ownership in one project, an endorsement that got Duncan attention from CCS rivals.

CCS is staunchly opposed by environmental groups who view it as ineffective, but has emerged as a preferred approach by the oil industry to combat climate change and as a way they might get to zero emissions by 2050. The International Energy Agency, in a 2021 report, said that goal will be more difficult without carbon capture.

“The history of CCS adaptation in the United States has not been a good story,” said Tyson Slocum, energy program director at consumer advocacy group Public Citizen. “My fear is CCS is just going to become the next generation of ESG tomfoolery.”

But Talos could benefit in two ways, say analysts: forming a business burying greenhouse gases that is immune to the usual boom-bust oil cycles, and potentially winning back investors who have shunned oil and gas companies over climate concerns.

The 49-year-old Duncan has been part of three oil and gas startups and transformed Talos into a sizeable independent Gulf of Mexico oil producer valued at $1.7 billion through nearly a dozen acquisitions.

That background has helped draw energy companies to Duncan’s vision and his early success with carbon capture has startled others, said energy executives interviewed by Reuters for this story.

“It’s interesting when you are ahead and the big guys are following you,” said Michael Wichterich, chairman of Chesapeake Energy Corp , a large U.S. natural gas producer who has known Duncan for years.

After Duncan began announcing new projects planned along the U.S. Gulf Coast, Wichterich said he received a call from a large oil company and Talos rival wanting to learn more about Duncan.

“I tend to own stocks that are run by people I know, trust and respect. Tim checks all of those boxes,” said Wright.

Duncan also has lured senior executives to his vision of a company that can develop more fossil fuels and still address air pollution.

Robin Fielder, former CEO of pipeline operator Noble Midstream Partners, now runs Talos’ CCS business. Duncan is “very entrepreneurial, and I use the word ‘fast-paced’ all the time,” she said. “Tim has been instrumental in helping us get connections,” she said.

Duncan currently holds monthly meetings with a dozen employees from across the company to glean new ideas.

“Tim is an exceptional leader,” said Paula Glover, president of the Alliance to Save Energy, an energy efficiency group, who joined the company’s board in part because of Duncan’s commitment to employees and stakeholders.

Glover, a Black woman in a largely White, male, industry, said Duncan stands out because he is building a culture and company for the long term.

“He focused on a culture of belonging – that’s how I believe diversity, equality and inclusion work,” said Glover.