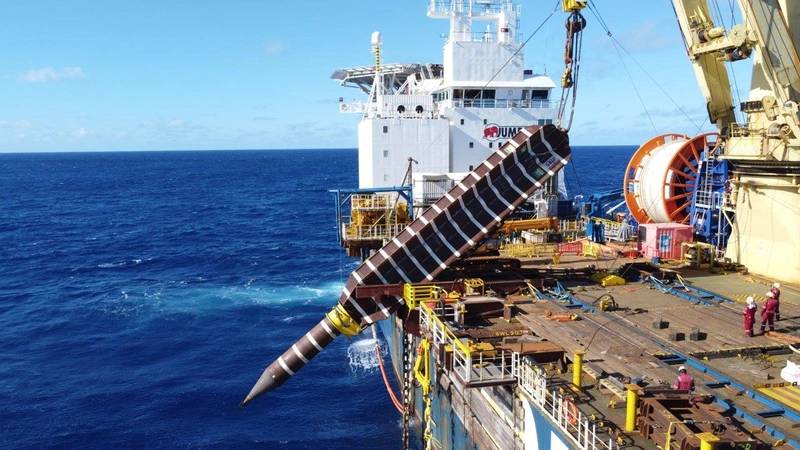 (OM)  Jumbo Offshore has executed the transport and installation of a torpedo pile mooring system, including mooring for flexible risers, umbilical for Libra Consortium’s Guanabara FPSO.

While this type of installation previously required the mobilization of up to three anchor-handling tugs, Jumbo carried out the entire contract using only its J-class offshore installation vessel Fairplayer, working in the Mero Field of Brazil’s Santos Basin.

Jumbo started investigating this to offer a more efficient and sustainable installation method. The first studies into a workable solution started around 2010.

Jumbo carried out the project in each quarter of 2021. Its scope of work consisted of the installation of 24 120-tonne torpedo anchor piles, connecting chains and polyline sections, and the installation of 11 35-tonne anchors for the flexible risers and umbilical mooring lines. The work also included the preliminary survey of the seabed, the removal of obstacles and post-lay survey.

The torpedo mooring system is a Petrobras in-house developed method of mooring large floating structures such as FPSOs. The installation process involved lowering the torpedo pile to a set depth above the seabed. It is then released, free-falling at high speed through the water before penetrating the seabed. An ROV is then deployed to attach mooring chains and lines.

Up until Jumbo’s one-installation-vessel method, this procedure has usually been performed by two anchor-handling vessels working in tandem, sometimes even with a third vessel performing the ROV monitoring and survey work.

The Fairplayer vessel started the project with the 120-tonne piles, using one of its two 900-tonne cranes to tilt them over the side of the vessel, and then winch them down to the launch depth.

After a final location check, the torpedo could be released to freefall to the seabed.

“Working with one vessel enabled a much more controlled n process,” said Brian Boutkan, Jumbo head of sales and business development, Americas. “Furthermore, compared to previous campaigns with anchor-handling vessels, the operations at the port were also more efficient. The Fairplayer has its own cranes, which meant we could pick up the equipment ourselves. And she has a large deck, so she carried more torpedos and needed less trips to port.”

Repeating this process 24 times, Jumbo’s crew increased its workability and efficiency in the installation process.

Boutkan added, “There are always waves and swell when working in the South Atlantic region offshore Brazil. During the installation we encountered all seasons, from summer to winter. This definitely gave us some challenges, but we improved our efficiency in working with the piles to a point that we could install them even in higher waves.”

The project progressed with the installation of the smaller 35-tonne anchor piles. Although these required a slightly different installation method, Jumbo had the flexibility to make the necessary changes to provide a comprehensive mooring installation package that included the flexible riser and umbilical anchors.

The project concluded with the mooring line installation campaign. The mooring lines consisted of both chain and polyester segments, so Jumbo needed two separate overboarding systems.

“After attaching the mooring line to the pile, we laid the chain and remainder of the mooring line in a predetermined corridor on the seabed. It’s important not to have too many twists in the line, so we checked this by flying over the installed mooring with the ROV,” Boutkan said.