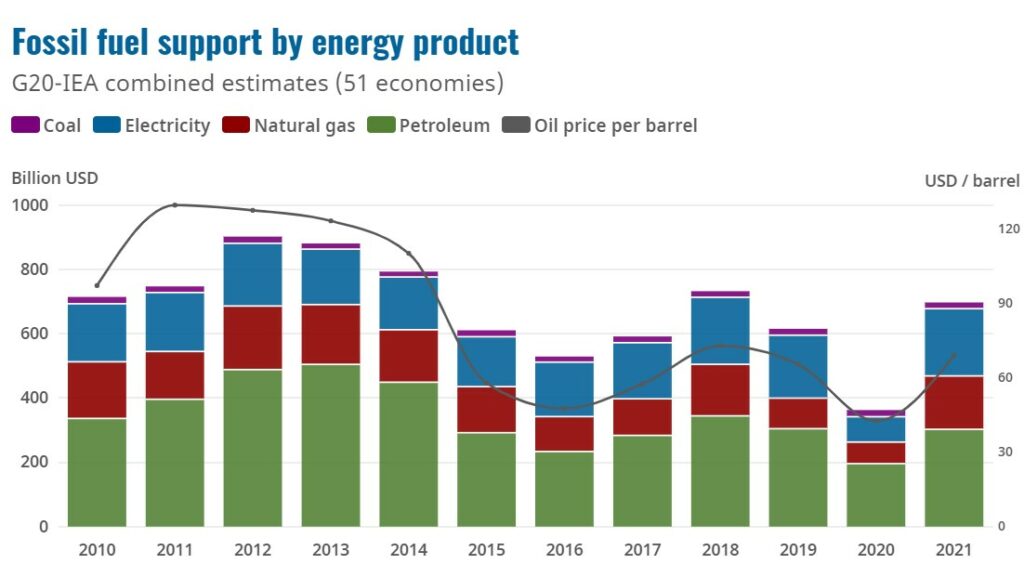 The energy transition progress towards a sustainable future has encountered roadblocks in the form of fossil fuel subsidies, based on an analysis by the International Energy Agency (IEA) and the Organisation for Economic Co-operation and Development (OECD), which outlines that the backing for fossil fuels almost doubled in 2021, reaching $697.2 billion.

While energy transition and climate change took the offshore industry by storm a while back with new initiatives popping up one right after the other, this progress towards international climate goals slowed down after Covid-19 measures were lifted and even more so recently due to the current geopolitical and energy crises.

This is confirmed by the OECD and IEA’s new analysis, revealed on Monday, which underlines that major economies sharply increased support for the production and consumption of coal, oil and natural gas, with many countries struggling to balance longstanding pledges to phase out inefficient fossil fuel subsidies with efforts to protect households from surging energy prices.

The new analysis shows that overall government support for fossil fuels in 51 countries – spanning the OECD, G20 and 33 other major energy-producing and consuming economies representing around 85 per cent of the world’s total energy supply – almost doubled to $697.2 billion in 2021, from $362.4 billion in 2020, as energy prices rose with the rebound of the global economy. The IEA and OECD disclosed that consumption subsidies are anticipated to rise even further in 2022 due to higher fuel prices and energy use.

Mathias Cormann, OECD Secretary-General, remarked: “Russia’s war of aggression against Ukraine has caused sharp increases in energy prices and undermined energy security. Significant increases in fossil fuel subsidies encourage wasteful consumption though, while not necessarily reaching low-income households. We need to adopt measures which protect consumers from the extreme impacts of shifting market and geopolitical forces in a way that helps keep us on track to carbon neutrality as well as energy security and affordability.”

Furthermore, OECD analysis of budgetary transfers and tax breaks linked to the production and use of coal, oil, gas and other petroleum products in G20 economies showed total fossil fuel support rose to $190 billion in 2021 from $147 billion in 2020.

In addition, the analysis points out that the support for producers reached levels not previously seen in OECD tracking efforts, at $64 billion in 2021 – up by almost 50 per cent year-on-year, and 17 per cent above 2019 levels. Those subsidies have partly offset producer losses from domestic price controls as global energy prices surged in late 2021 while the estimate of consumer support reached $115 billion, up from $93 billion in 2020.

Moreover, the IEA’s estimates of fossil fuel subsidies cover 42 economies and show that consumer support increased to $531 billion in 2021, more than triple their 2020 level, driven by the surge in energy prices.

Both OECD and IEA have consistently called for the phasing out of inefficient fossil fuel support and the re-direction of public funding toward the development of low-carbon alternatives alongside improvements in energy security and energy efficiency. These two players claim that subsidies intended to support low-income households often tend to favour wealthier households that use more fuel and energy and should therefore be replaced with more targeted forms of support.

Dr Fatih Birol, IEA Executive Director, commented: “Fossil fuel subsidies are a roadblock to a more sustainable future, but the difficulty that governments face in removing them is underscored at times of high and volatile fuel prices. A surge in investment in clean energy technologies and infrastructure is the only lasting solution to today’s global energy crisis and the best way to reduce the exposure of consumers to high fuel costs.”

As the IEA believes that Europe is at the epicentre of the current energy market turmoil, Birol outlined five measures to deal with this crisis in July 2022.

These measures entail accelerating the deployment of low-carbon sources, including nuclear power.