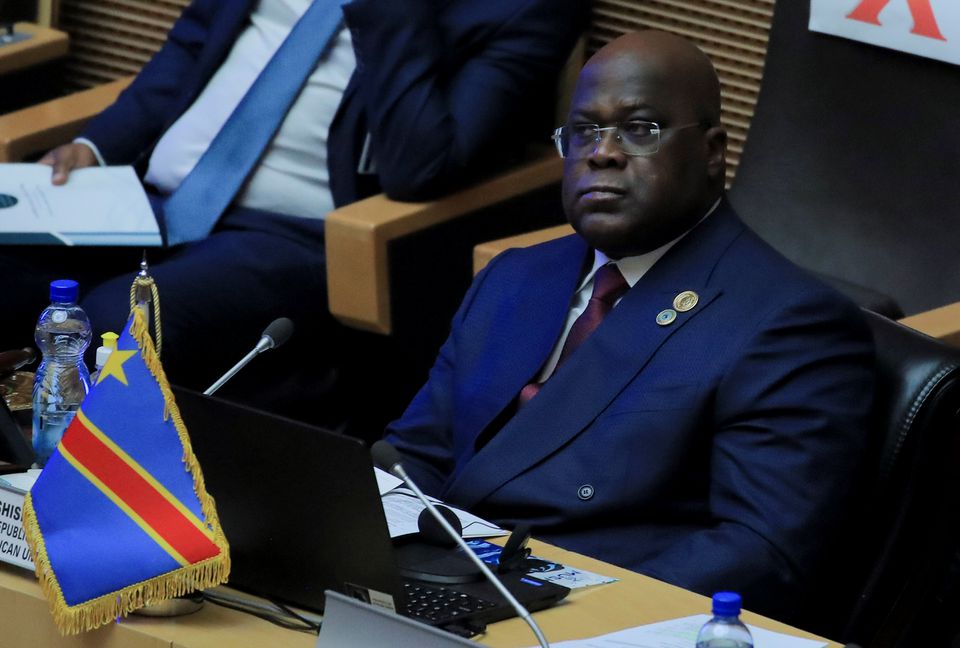 (Reuters) – Licensing rights for 30 oil and gas blocks in the Democratic Republic of Congo went up for auction on Thursday, opening parts of the world’s second-biggest rainforest to drilling that could release large amounts of carbon into the atmosphere, jeopardising climate goals to tame global warming.

President Felix Tshisekedi presided over the launch of bidding at a ceremony in the capital Kinshasa. Attendees included representatives from France’s TotalEnergies (TTEF.PA) and several domestic companies, although a TotalEnergies spokeswoman said the company would not participate in bidding.

“The launch of the tendering process… speaks to our desire to put our resource potential at the service of our country,” Tshisekedi said, arguing that fossil fuel production would boost development in one of the world’s poorest countries.

“This is in a context where fossil fuels, including crude oil and gas are at the centre of global issues of peace and stability because of the Russian-Ukrainian conflict,” he added.

Tshisekedi said modern drilling methods and tight regulation would minimise the ecological impact and denied that Congo was going back on commitments to protect its forests.

But environmental activists and scientists said drilling in the designated areas would inevitably have steep consequences. Several of the proposed oil blocks overlap with peatlands, swampy areas that hold billions of tonnes of carbon.

Simon Lewis, a leading researcher on Congo’s peatlands, estimated this month that drilling in the blocks proposed by the government could release up to 5.8 billion of tonnes of carbon, more than 14% of the world’s total greenhouse gas emissions in 2021.

“In a zone where there are peatlands, any industrial exploitation means the explosion of a carbon bomb,” said Irène Wabiwa Betoko, who leads Greenpeace’s Congo Basin project.

Two of the other oil blocks overlap with Virunga National Park, a sanctuary for endangered mountain gorillas on the borders with Rwanda and Uganda.

Hydrocarbons Minister Didier Budimbu said bids to participate in production-sharing contracts with the government would be accepted over the next six months for oil blocks and three months for gas blocks.

Asked on Tuesday whether Congo might forego drilling in exchange for compensation from richer countries, presidential adviser Tosi Mpanu-Mpanu was sceptical.

He cited the example of Ecuador, which requested $3.6 billion in 2007 to offset revenue lost by not drilling in its Yasuni National Park. The initiative was scrapped in 2013 after it brought in less than 4% of the requested amount. Drilling began three years later.

In addition to 27 oil blocks, the rights to extract methane gas from three blocks in Lake Kivu are up for auction.

“But the combination of environmental risks, regulatory uncertainty in the sector, the huge logistical challenges of highly remote exploration, and on top of it all Congo’s higher political risk premium, will likely make many majors unwilling to commit,” Rouget said.

Previous efforts by Congolese governments to boost output beyond the roughly 25,000 barrels per day it has long produced along its Atlantic coast have run into these same challenges.

Tshisekedi’s government says Congo has 22 billion barrels of crude reserves and it is targeting production of 200,000 barrels per day.

But even if investment does pour in, critics say there is no guarantee it will benefit the Congolese people.

Congo is already a mining powerhouse, producing large amounts of copper, cobalt, gold, and diamonds, yet it remains deeply impoverished, due largely to corruption and misgovernance.

Israeli investor Dan Gertler gave up control in February of two of the blocks on auction near Lake Albert in the east as part of a deal with the government, which had the previous year announced it was ending production-sharing agreements.

The terms of the deal have not been made public. Gertler is under U.S. sanctions for alleged corruption in Congo’s mining sector. He denies any wrongdoing.

Gertler was in attendance at Thursday’s ceremony, a Reuters reporter said.