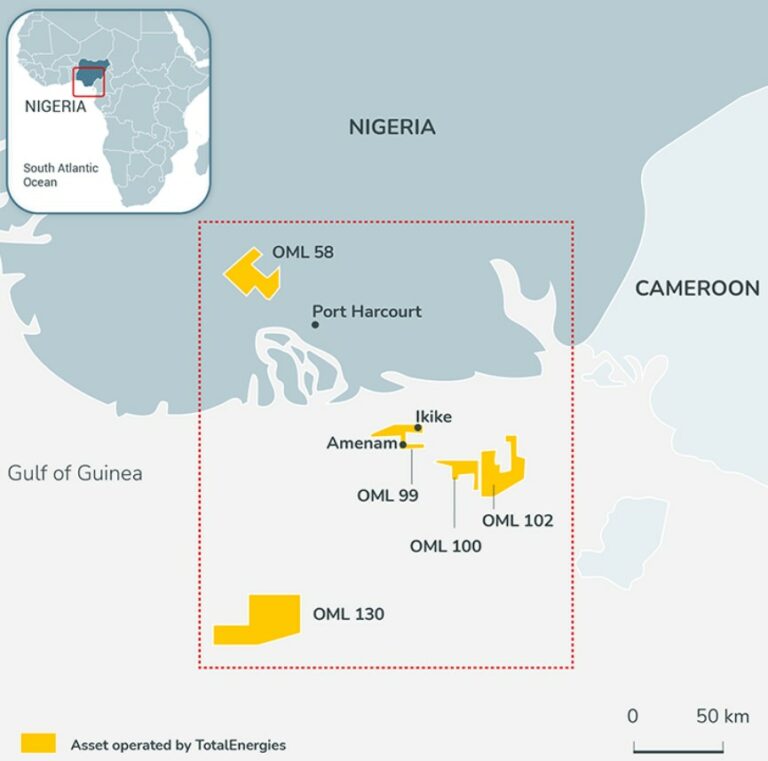 French energy giant TotalEnergies has kicked off production from a field tied back to existing facilities located offshore Nigeria.

Back in 2018, the Nigerian media disclosed that Total (now TotalEnergies) had been preparing to make the FID of the Ikike project. A year later, reports started circulating that the oil major was working on sanctioning the development of this project.

At the time, the project was expected to be developed as a tie-back to Amenam five-well platform, while production was originally anticipated in 2020, however, this was based on a potential FID in 2018.

In an update on Monday, TotalEnergies revealed that production has started from the Ikike field, in Nigeria. With a 40 per cent interest, the French player is the operator of the OML99 licence where the field is situated and its partner is the Nigerian National Petroleum Corporation (NNPC), which holds the remaining 60 per cent stake.

Henri-Max Ndong-Nzue, Senior Vice President Africa, Exploration and Production at TotalEnergies, remarked: “TotalEnergies is pleased to start production at Ikike, which was launched a few months before the covid pandemic, and whose success owes a lot to the full mobilisation of the teams. By tapping discoveries close to existing facilities, this project fits the company’s strategy of focusing on low-cost and low-emission oil projects.”

Located 20 kilometres off the coast, at a depth of about 20 meters, the Ikike platform is tied back to the existing Amenam offshore facilities through a 14 km multiphase pipeline, according to TotalEnergies. Based on the firm’s data, it will deliver peak production of 50,000 barrels of oil equivalent per day by the end of 2022.

The company further explained that the Ikike project leverages existing facilities to keep costs low. It is designed to minimise greenhouse gas emissions, which are estimated at less than 4kg CO2e/boe. This is expected to contribute to reducing the average carbon intensity of the company’s upstream portfolio.

Moreover, TotalEnergies underlined that 95 per cent of hours were worked locally. In addition, the jacket and topside modules were entirely built and integrated by local contractors.

When it comes to TotalEnergies’ latest activities, it is worth noting that the French giant recently completed all the required steps to pull out of Myanmar.

As a result of this, Thailand’s PTTEP took over the operatorship helm at the Yadana offshore gas field.