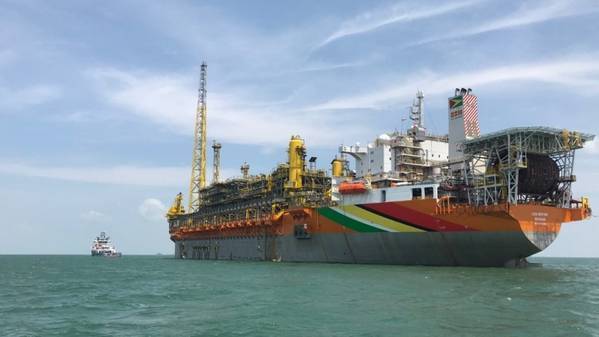 Rystad Energy, an energy intelligence group, has revealed that Guyana’s burgeoning offshore oil and gas industry is poised to enter the big league with revenues set to break the $1 billion mark in 2022 and see a significant annual acceleration in 2030.

This boost in revenue is powered by the Stabroek block, according to Rystad Energy’s research, which shows that the government’s revenue from domestic production is on track to surpass the $1 billion mark this year and accelerate to $7.5 billion annually in 2030. In light of this, the energy intelligence group points out that this year is set to be a turning point for the Georgetown government to start capitalizing on the vast reserves in the offshore field, with revenues more than doubling over 2021 levels.

Based on Rystad Energy’s research, low breakevens and below-average emissions intensity in the Stabroek will propel Guyana from a “relatively small” producer to a “global leader” in the coming years, solidifying the country’s position as a “competitive and policy-friendly player” for offshore production.

As a result of this, the government’s take – i.e. the value received by the government over the life of a license in the form of royalties, profit sharing and taxes – from the production is expected to increase until 2025, reaching $4.2 billion annually. The energy intelligence provider explains that government revenues will fall to $2.4 billion in 2027 triggered by a forecasted drop in oil prices and continued spending on the field’s development.

However, production growth is still set to accelerate, with revenue momentum resuming as new pre-Final Investment Decision (FID) projects are sanctioned and brought online, leading to “peak” government revenues of $16 billion in 2036. Rystad says that these projections do not factor in “as-yet undiscovered resources.”

Furthermore, the recent spate of prolific discoveries and the steady pace of FIDs position the Guyanese government to reap the rewards of these finds with cumulative revenues totalling $157 billion by 2040, forecasts the energy intelligence player.

Moreover, Guyana is the “global leader” in total offshore discoveries since 2015, with 11.2 billion barrels of oil equivalent, amounting to 18 per cent of discovered resources and 32 per cent of discovered oil. Rystad highlights that a whopping 9.6 billion barrels out of this total number are oil, far outpacing the U.S. in second place with a comparatively small 2.8 billion barrels. The company also underscores that the Stabroek block accounts for all of these finds, although, recent discoveries in other areas show the potential for growth elsewhere.

Schreiner Parker, senior vice president and head of Latin America and the Caribbean, remarked: “Guyana is just starting to extract and monetize its vast resource wealth, and the coming years will be a financial windfall for the Georgetown government. The country has played the long game after several decades of elusive exploration. The country’s offshore production is finally ready to take off.”

Keeping the longer-term picture at the forefront, Rystad Energy elaborates that Guyana is forecasted to produce 1.7 million barrels per day (bpd) of oil by 2035 – not accounting for as-yet undiscovered volumes – propelling the country to the fourth position on the list of the largest global offshore oil producers, leapfrogging the U.S., Mexico and Norway.

Rystad Energy further discloses that Guyana is on the higher end compared to the fiscal regimes of other offshore leaders, with the government take clocking in at 59 per cent of the total value. On the other hand, applying the U.S. fiscal regime to the Stabroek block would result in a government take of only 40 per cent while Nigeria and Brazil align more with Guyana’s fiscal policies, with 58 per cent and 61 per cent, respectively.

The energy intelligence group emphasises that the cost of supply is a “significant factor” in considering the desirability of assets and comparing them to other sources and regions. The firm believes that Guyana’s competitive breakeven costs, which average $28 per barrel across all projects and less than $20 for producing projects, are helping to transform the country into a “global heavyweight” in offshore production.

Rystad Energy sees Guyana’s offshore oil fields as some of the most competitive supply sources outside of the Middle East and offshore Norway, which are cheaper than the U.S. onshore heavyweight the Permian, Russia and many other sources.

Additionally, emissions intensity from offshore activity in Guyana is lower than the global average for oil and gas production and deepwater offshore production, further strengthening the country’s position through the energy transition, claims the energy intelligence provider. In line with this assessment, the upstream emissions from Guyana’s deepwater activities average 9 kilograms of CO2 per boe, comparable to Brazil and slightly higher than Norway.

While tensions with neighbouring Venezuela and Suriname have been an issue in the past, Rystad underlines that “warming relations” have allowed for increased drilling along the borders and boosted overall investor sentiment in Guyana.

Despite this, the energy intelligence group states that it may not be all plain sailing as strong institutional governance, transparency and regulatory practices will be vital to unlocking the full potential of Guyana’s resource wealth for its society. Even though the government has taken steps to improve governance, including establishing a sovereign wealth fund and improving fiscal policy transparency, Rystad states that there are still improvements to be made.

In line with this, the Extractives Industries Transparency Initiative (EITI), which champions strong resource management and governance practices, recently found several weaknesses in Guyana’s company reporting and tax processes. However, Rystad Energy concludes that the country’s EITI score will likely grow in the coming years as recent improvements take effect.