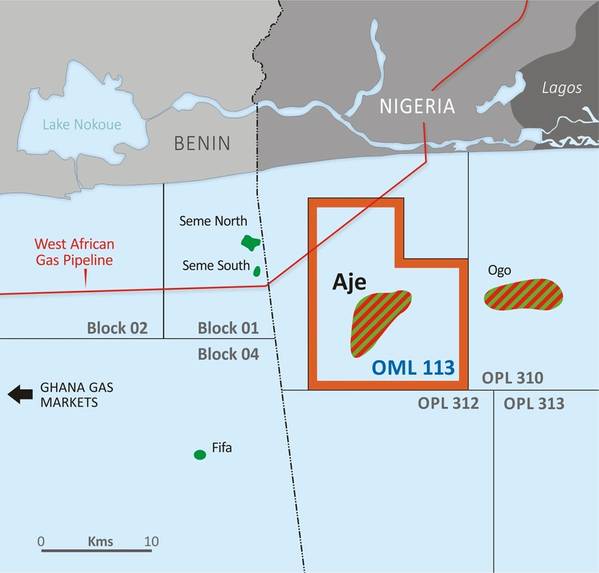 (OEM) London-based and Oslo-listed oil and gas company Panoro Energy has completed the sale of its interest in the Offshore Mining Lease no. 113 (OML 113) offshore Nigeria to Oslo-listed PetroNor.

Back in October 2019, the two oil and gas players entered into a sale agreement, enabling PetroNor to buy out Panoro’s interest in OML 113, including the Aje field, and take over a lead technical and management role for the project in order to progress it further.

In December of that same year, PetroNor signed an investment agreement with Nigeria’s Yinka Folawiyo Petroleum (YFP) to forge a new path forward for the future development of the YFP-operated Aje field in Nigeria’s OML 113 offshore license.

In January 2022, Panoro reported that all government approvals were received for the sale of the shares of its fully-owned subsidiaries that hold 100 per cent of the shares in Pan Aje to PetroNor.

In an update on Wednesday, Panoro Energy announced the completion of the sale of its fully owned subsidiaries Pan-Petroleum Services Holding and Pan-Petroleum Nigeria Holding for an upfront consideration consisting of the allotment and issue of new PetroNor shares with a fixed value of $10 million, plus contingent consideration of up to $16.67 million based on future gas production volumes.

As explained by the firm, these subsidiaries hold 100 per cent of the shares in Pan-Petroleum Aje Limited (Pan Aje), which participates in the exploration for and production of hydrocarbons in Nigeria and holds a 6.502 per cent participating interest, with 16.255 per cent cost-bearing interest, representing an economic interest of 12.1913 per cent in OML 113. Therefore, following the completion of this transaction, Panoro has no operational presence remaining in Nigeria.

The company explained that the upfront consideration of $10 million is expected to the paid within fifteen business days via the allotment and issue of 96,577,537 new PetroNor shares. Furthermore, the volume of PetroNor shares issued to Panoro has been determined with reference to the contractually determined 30-day volume-weighted average price of PetroNor’s shares which are listed on the Oslo Børs.

John Hamilton, CEO of Panoro, said: “We are pleased to have finally concluded the sale of Panoro’s interest in OML 113 to PetroNor and unlock value for our shareholders who can continue to benefit from future gas successes at OML 113 through the upcoming distribution of the shares in PetroNor received as payment for the upfront consideration.

“This also represents a key milestone for Panoro’s strategy with the first dividend payment to its shareholders.  Meanwhile, the board and management of the company remain fully committed to initiating sustainable cash dividends at the earliest opportunity and to unlock further value for its shareholders.”

Once the shares are issued and received, Panoro intends to implement steps to distribute these new PetroNor shares to its shareholders as a dividend in specie. Following receipt of the shares, Panoro will temporarily hold a 6.78 per cent shareholding with voting rights in PetroNor, until the shares are distributed in specie to Panoro shareholders.

In a separate statement, PetroNor confirmed that it has completed the purchase of Panoro’s fully owned subsidiaries that together hold 100 per cent of the shares in Pan Aje, adding that the acquisition of Panoro’s interests in OML 113 clears the path for the establishment of Aje Production as a jointly owned venture with Yinka Folawiyo Petroleum, the operator of OML 113.

Jens Pace, PetroNor’s interim CEO, remarked: “We are pleased to confirm that this long-awaited transaction with Panoro has now been completed. The acquisition of the ownership interest in the Aje field is strategically attractive and supports our stated growth strategy of acquiring assets that add production, material reserves and resources to the company. With the establishment of Aje Production, YFP and PetroNor will form a dynamic and effective licence partnership to lead the redevelopment of the Aje field.”

Discovered in 1996, the Aje oil and gas field started production in May 2016 via the FPSO Front Puffin. Based on PetroNor’s data, there are two production wells – the Aje-4 with oil production and Aje-5ST2 with oil and gas production – along with a significant gas-condensate column ready for further development.

As revealed last month, the JV partners in the Aje field are actively looking to replace the current FPSO Front Puffin to increase capacity as part of long-term development plans for the surrounding OML-113 lease.

The field’s long-term development plan, for which a final investment decision (FID) is still pending – includes the potential drilling of three new wells that “could significantly increase production of oil and gas liquids at a time nations around the world are seeking new sources of oil and gas,” elaborated ADM Energy at the time. This company holds a 9.2 per cent interest in the Aje field.