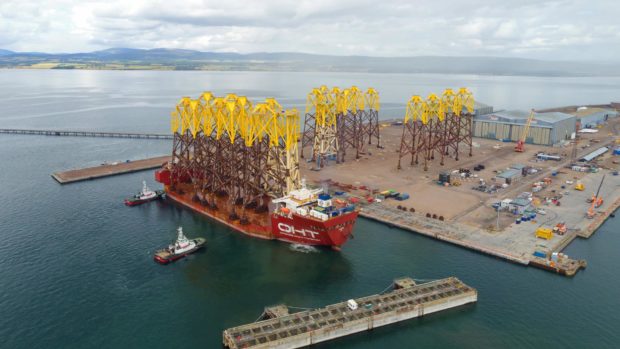 If the region is successful in its attempt, it would help to attract “new and increased manufacturing” that would ease the delivery of Scotland’s next generation of wind farms.

Ocean Winds, a 50-50 joint venture launched in 2020 by EDP Renewables and ENGIE, is currently operating, building and developing, three offshore wind projects in the Moray Firth.

Moray East reached full output this year, while its sister site, Moray West, is currently under development and could become operational as soon as 2024.

Ocean Winds is also working to develop the recently awarded ScotWind site that has been named the Caledonia offshore wind farm.

Previously work with Global Energy Group and Port of Cromarty Firth around the delivery of Moray East is a large factor in Ocean Winds decision to Cromarty Firth’s green freeport bid.

What is a green freeport?

Moray West recenlty confirmed that the Siemens Gamesa wind turbines will be pre-assembled and marshalled at Port of Nigg.

And a successful outcome for the Opportunity Cromarty Firth bid will be a “further springboard” for future investment, Ocean Winds.

Dan Finch, country manager for UK for Ocean Winds, commented: “I am delighted that we are strengthening our ties with the Cromarty Firth, which handled the large components of Moray East and are confirmed as marshalling the Moray West wind turbines.

“The newly revealed scale of the project pipeline in the UK will require additional port capacity and the green freeport model has the potential to attract new and increased manufacturing and fabrication capability to the Firth.

“Opportunity Cromarty Firth leading a green freeport bid is well placed to build on the earlier track record with the offshore energy and wind sectors.

“A green freeport centred on the Cromarty Firth can ensure the success of the region around the many opportunities that will emerge from the confirmed pipeline of major east coast offshore wind projects.”

It is based on the UK Government’s Freeport model, but has been given a net zero twist north of the border

The Opportunity Cromarty Firth bid, which includes Port of Inverness and Inverness Airport, have estimated a successful bid will create 20,000 jobs across the Highlands.

They face stiff competition though, with a host of other consortium’s in the running, including the North East Scotland Green Freeport (NESGF) that covers Aberdeen and Peterhead.