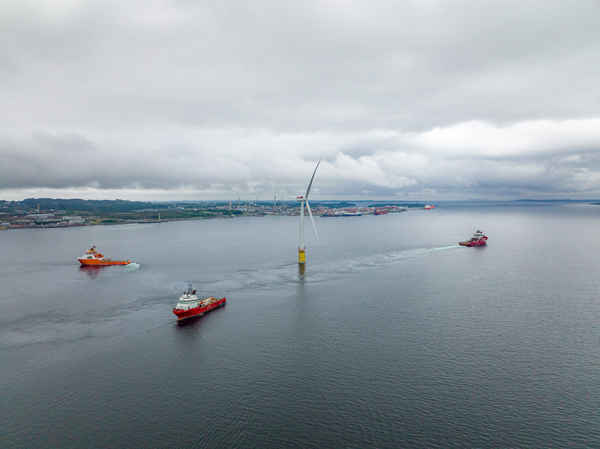 (OE) The Petroleum Safety Authority Norway (PSA), the Norwegian offshore safety watchdog, has consented to Equinor taking the Hywind Tampen floating offshore wind farm into use, as the first turbine set sail to the offshore location.

Equinor’s 88MW Hywind Tampen will be the world’s largest floating offshore wind farm once completed later this year. It will serve as the power source for five of Equinor’s offshore oil and gas platforms in the North Sea off Norway, Snorre A, and B, and Gullfaks A, B, and C. Norway approved Equinor’s 4.8 billion Norwegian crowns plan to build the Hywind Tampen project back in April 2020.

Oil Watchdog Watches Over Renewables, Too

The PSA, known as the oil and gas watchdog, as the ‘Petroleum’ in its name says, was delegated supervisory authority for offshore renewable energy production, too, in 2020.

Its responsibilities in this area include developing dedicated HSE regulations for offshore wind power and supervising such facilities.

Since Hywind Tampen is closely integrated with petroleum operations on the NCS, the PSA has applied the existing petroleum regulations in its consideration of this development.

Worth noting, the first floating wind turbine for the Hywind Tampen project was recently assembled at Wergeland Group’s base in Norway. 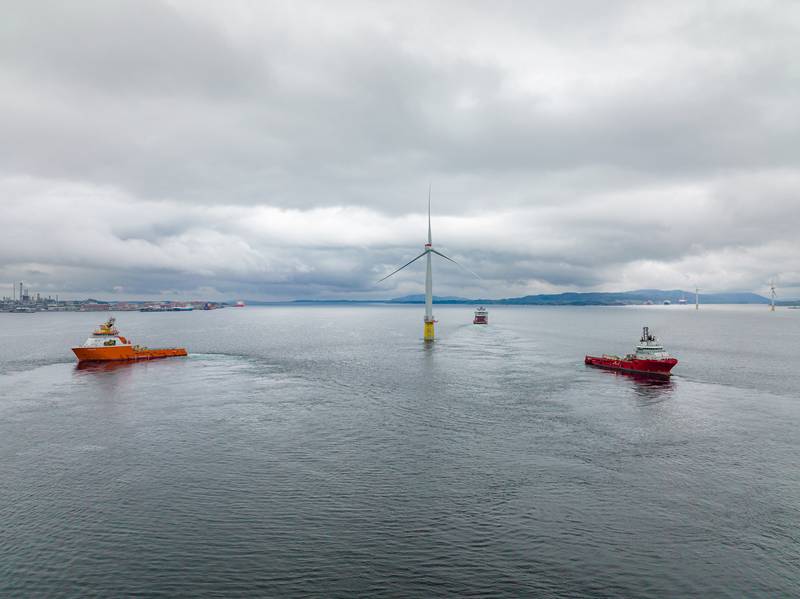 Credit: Credit: Jan Arne Wold / Woldcam via EquinorThe turbine assembled at Wergeland’s base is the first of eleven to be assembled. According to available information, the 8MW Siemens Gamesa turbine sailed away to the North Sea location on Thursday, under tow by Skandi Iceman AHTS.

Once they are all installed, the eleven 8 MW floating turbines will be able to meet about 35 percent of the annual power demand of the five platforms.

Siemens Gamesa is responsible for the delivery of wind turbines. They are being built in multiple locations in Europe and then transported to Wergeland Base in Gulen in Vestland county, for assembly.

The electric cables will be supplied by JDR Cable System Ltd, which will be fabricating them in Hartlepool in the UK.  Subsea 7 AS will be responsible for installing the electric cables and connection to the Snorre and Gullfaks platforms.

Offshore Engineer has reached out to Equinor, seeking more info on when the first turbine would be brought online, and on the expected timeline for the remaining turbines. Equinor did not immediately reply.

There’s currently a little over 100 MW of floating wind installed worldwide, all of it in Europe, with Hywind Tampen set to nearly double the currently installed capacity. This is still minuscule compared to the industry’s older brother, the fixed-bottom offshore wind.

According to Wind Europe, for example, Europe installed 17 GW (11 GW in the EU-27) of new wind capacity in 2021, and this was described as an underachievement by Wind Europe which said back in February: “This [17GW] is not even half of what the EU should be building to be on track to deliver its 2030 Climate and Energy goals.”

Back to floating offshore wind, Wind Europe recently noted that the industry is developing rapidly, and could, only in Europe, jump from the currently installed 113 MW floating wind turbines to 330 MW in 2024, and possibly 10GW by 2030, based on ambitions and targets announced by Norway, France, Span, Greece, Portugal, Italy,  Scotland, and Ireland.

WindEurope CEO Giles Dickson said: “Floating wind energy is about to take off big time in Europe. Over 100 MW is already in operation. Governments see it’s working well and that it means they can do offshore wind in deeper waters. So they’re announcing big targets and planning big auctions. Provided they put the right policies in place it is not unreasonable to expect that Europe will have over 10 GW of floating wind in operation by 2030.”