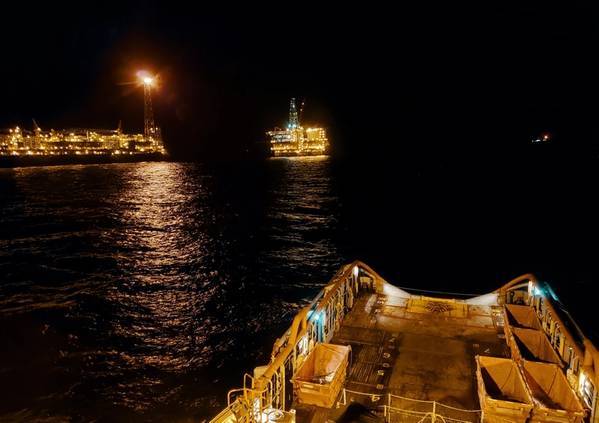 (EV) “There is a unique opportunity to invest in new projects, given the high prices, which we expect to remain high for a few years,” IHS technical researcher for Africa Ismini Katsimpardi said. “Projects that were not viable one or two years ago can now go ahead.”

Eni announced its Baleine discovery, which holds an expected 2 billion barrels of oil in place, in Cote d’Ivoire in September 2021. The Italian company is drilling an appraisal well in a nearby block, which will provide more insight into Baleine’s outlook.

The company will likely process gas onshore for power generation and domestic use. This will require the construction of a pipeline, leading the analyst to predict that for the first two or three years Eni will reinject the gas.

She put the total capital expenditure for the Baleine project at $5 billion, with a “healthy breakeven” at $40 per barrel.

It will also be significant for the local government. With a state take of 60%, IHS expects Cote d’Ivoire to earn $1.5bn per year once in full production.

In February this year, TotalEnergies and Shell announced the Venus and Graff discoveries offshore Namibia.

There remains a “fair amount of uncertainty” over the Venus discovery, Katsimpardi said. Initial reports put the discovery size at 1.5bn barrels, but some reports have put this substantially higher, even as high as 10bn barrels. Appraisal this year should shed more light on the find.

IHS expects Total to develop the project with two FPSOs, saying the capital expenditure required would be “significant”. However, the internal rate of return (IRR) would be 30-35%, the analyst said.

Shell would likely develop its Graff find also with an FPSO. Katsimpardi put this project’s potential IRR at 37-40%.

Given the companies’ net zero plans, routine flaring would be impossible. Furthermore, “flared gas is throwing away value,” said Katsimpardi.

Similar to the Baleine discovery, initially the operators might reinject gas but ultimately it would be produced, potentially via a shared floating LNG (FLNG) unit or to onshore.

Success would be transformative for Namibia. “These two developments would have an expected peak production of more than 500,000 barrels per day,” she said. “Namibia could be in the top six or seven producers in Africa.” IHS shows the possibility for Namibia to overtake Angola after 2030.

Total’s Brulpadda and Luiperd discoveries should not be overlooked. IHS predicted that Luiperd would be developed in three phases. The first would involve just two or three wells and be tied back to the FA platform, carrying gas onshore to the Mossel Bay gas-to-liquid (GTL) plant.

Such an approach would “minimise risk and capex spend”, Katsimpardi said. The project would have a breakeven of less than $2 per 1,000 cubic feet.

By the mid-2030s, South Africa would be earning $700 million from this project, she said. “Development of the Brulpadda discovery would take this higher, although it would need more capex on additional gas infrastructure in the area.”

The opportunities of the finds are significant. For the companies involved, the producer countries and regions such as Europe hoping to secure new supplies.

As countries start to see production, they are likely to change terms. “Some tighten too far, like Senegal and Tanzania, and as a result do not see much success in attracting new investments.”

Bruce called for countries to find a balance, to maximise revenues for governments and investors. While the countries of South Africa and Namibia may be appealing now, there is no certainty this will continue forever.