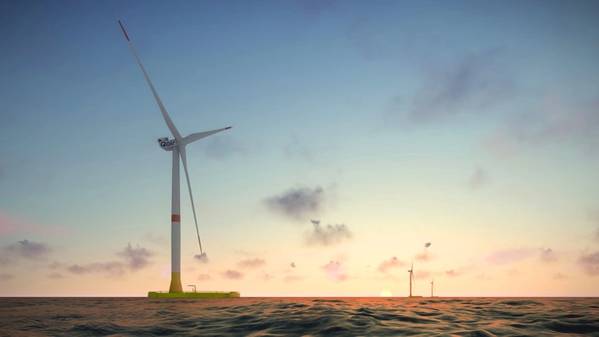 TotalEnergies, the French oil major with growing renewables aspirations, on Tuesday confirmed the start of the construction of the 30MW Eolmed floating wind project in the Mediterranean Sea, off France.

The project, in which TotalEnergies has a 20% stake, is operated by Qair. The news comes days after BW Ideol, another partner in the project, said last Friday that the Final Investment Decision for the floating wind farm had been reached.

“TotalEnergies is pleased to announce the start of construction of the Eolmed project, operated by Qair and in which TotalEnergies has a 20% stake,” the company said Tuesday.

This 30 MW project is located more than 18 km off the coast of Gruissan and Port la Nouvelle (Occitan region). The start of production is expected by 2024.

The wind farm, in which TotalEnergies bought a 20% stake in October 2020, will consist of three 10 MW wind turbines mounted on BW Ideol’s steel foundations and connected to the French Electricity Transmission Network (RTE) by a subsea cable.

“The project meets the objectives of the partners to ensure its good environmental integration and to promote the know-how of the Occitanie Region thanks to the involvement of all the stakeholders,” TotalEnergies said.

“Eolmed is part of the Occitanie Region’s strategy to relocate industrial production: the consortium has chosen a joint venture formed by Matière and Ponticelli to produce the floats in Bagnac-sur-Célé (Lot) and Port-la-Nouvelle (Aude). This joint venture will benefit from the port’s new infrastructure and will mobilize more than 600,000 man-hours of work across Occitania,” TotalEnergies added.

TotalEnergies said that the project was part of its strategy to develop floating wind energy, which allows access to deeper sites, further from the coast, and to take advantage of greater wind resources. The company is also involved in floating wind projects another floating wind project in France, as well as in South Korea, U.S., and the UK.

Olivier Terneaud, VP Offshore Wind at TotalEnergies: “We are proud to contribute through Eolmed to France’s development in floating offshore wind, a very promising segment in which TotalEnergies notably brings its extensive experience in offshore projects. Together with our partners, we will mobilize our know-how and our best resources to meet the technological and industrial challenges of this project, which meets the dual objective of developing local content while providing renewable energy.

BW Ideol, the company that broke the FID news in a brief statement on Friday and which owns a 5% stake in the project, shared further info on Monday.

Paul Dupin de la Guérivière, CEO of BW Ideol, specializing in foundations for floating wind turbines, said: “This is a major milestone for the EolMed project and for BW Ideol. Today’s decision to proceed with the construction and installation of the wind farm that was never challenged by legal recourse, reflects years of planning and preparation. As both project co-developer and provider of the floating technology and the related engineering services, we are delivering on our dual strategy, reinforcing our floating wind market leadership in France and favorably positioning ourselves for the upcoming French Mediterranean floating wind tenders.”

As previously reported, financing of the wind farm has been arranged with the support of the European Investment Bank, which, BW Ideol said, played a key role in the negotiations and structuring of the non-recourse debt provided by the Banque Postale, BPCE Energeco, and BPI France as lenders. Natixis and La Banque Postale acted as hedging banks. The project is also supported by a wide range of national and local organizations and companies.

While BW Ideol did not share the financial numbers, according to information on the website of the European Investment Bank (EIB), the total cost of the project is estimated at around 289 million euros (around $304 million). Of the total amount, EIB will provide 85 million euros.