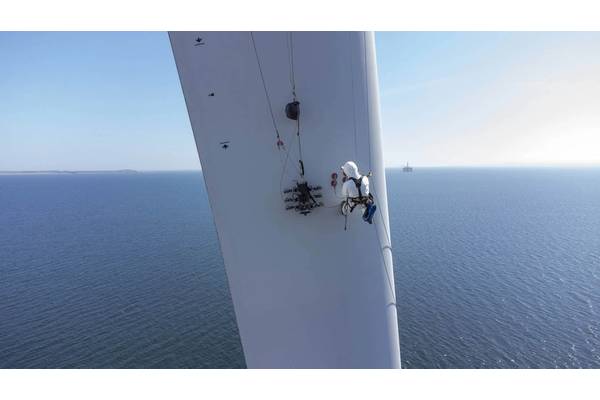 Whether we realize it or not, robotics and robotics systems are starting to impact our daily lives. From warehouse picking systems through to high-end medical devices through to your mowbot lawnmower. Each tends to be specialized to its own task and a similar trend is now starting to play out in the offshore wind space, where it’s hoped that robots can make operations safer and more efficient.

According to a report, The Economic Opportunity for Robotics in Offshore Wind and Key Energy Markets by the Offshore Renewable Energy Catapult (ORE Catapult), published last year, opex costs could be reduced by up to 9.5% by the end of this decade. That could increase up to 27.1% once all robotic innovations on the books have been realised. Turbine availability would also increase, but by a more modest 1.07% and up to 1.87% respectively.

For floating wind farms, the opex savings could to be more, at up to 18.8% by the end of 2040, and up to 25.8% once all robotic innovations have been realised, says the report. To put that in context, operations and maintenance activities typically contribute between 15% and 35% of the

“Endurance is one of the qualities of robots and that’s where one of the wins is,” says Michael Corsar, CTO at Cambridge based innovation firm Innvotek, which has been working on a number of concepts, from crawlers to drone systems. “It can work continuously, it doesn’t get cold, doesn’t need tea breaks.”

Some systems – beyond established offerings such as ROVs deployed from crewed vessels – are already starting to take their first steps. Amphibian, developed by Innvotek, with ORE Catapult support, is one. It’s a tethered crawler designed for use in splash zones down to 60 m subsea, measuring 800 mm by 600 mm by 350 mm and 40kg, with an automated tether management system. Tapping the power on the turbine, it uses powered magnets to crawl on the surface of monopiles, inside and outside, or any other steel surface, including curved or domed structures.
“It can clean scale and biofouling and carry a variety of inspection payloads, including wall thickness using ultrasonic testing and close visual inspection,” says Corsar. “We want to do those critical sections cannot get to with rope access, divers or ROVs or scaffold, and in the splash zone.”

The idea came about because of a “buzz” around the aging process of foundations. “First generation design foundations reaching 10—15 years old were coming of age and were corroding perhaps more quickly than people would like or expect and a solution was required that didn’t need divers or ROVs. There are a large number of monopiles, 5000—6000 in the North Sea, all with similar problems with corrosion and biofouling. Monopiles are 30-40m deep, 8 m in diameter; there’s a lot of surface area that needs to be inspection, a lot of length of weld that needs to be inspected.”
Amphibian is currently “halfway automated”. It has to be driven to a weld, but once there it can run an automatic inspection. “The three-year road map is to do an entire monopile without anyone except deployment and retrieval,” says Corsar.

While designed for offshore wind, Amphibian is already being used in other industries, including onshore power generation and it’s also being demonstrated for onshore wind tower inspection. It also has application in shipping, to perform UWILD activities, as well as oil and gas, where the company has been working with Oceaneering on risers and caissons, says Corsar. 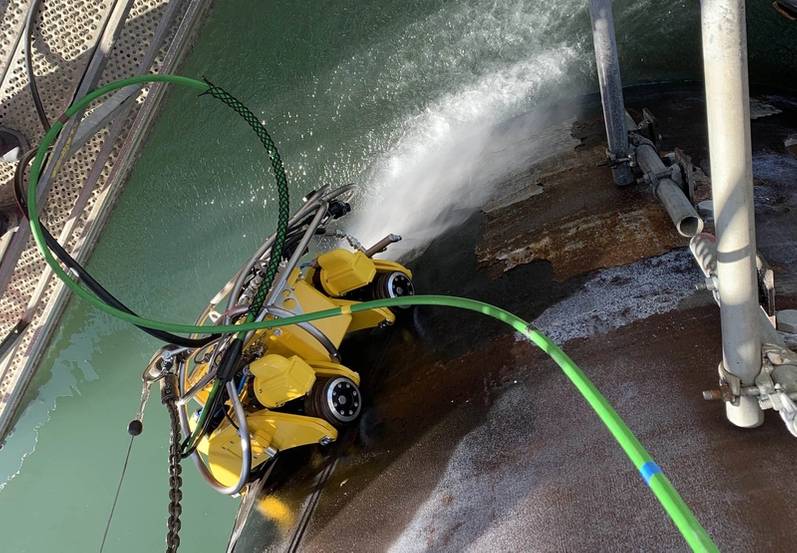 Robot bolt tensioningUsing the same platform, Innvotek is now also working on another robot designed to perform bolt inspection and tensioning. This vehicle will have “a lot more features and a lot more intelligence in it in terms of understanding it’s environment and capability in terms of tooling. Routine inspection and cleaning, physical interaction with the asset to torque up a bolt.” The project is about nine months in and then computer vision to identify bolts and then orient and align tooling and then do 99% of the torqueing itself; “it will just need a go, no-go command”.
The platform will use a distributed approach to localisation, says Corsar, which means that it uses different sources of information, such as existing knowledge of the asset, e.g. bolt spacing,

“In a relatively fresh development we’re starting to team up with another company looking at BVLOS comms via satellite where hopefully all the robot control can be done from the shore, within the next 12 months, using low latency satellite communications.”

Innvotek is also part behind the Firefly Inspect project, with partner Mapair. The project involves a drone that uses infrared technology (a 1,000W heat lamp) and AI to inspect for hidden imperfections composite structures (a technology initially developed for inspecting plane wings). A trial system, complete with an OptiTrack motion camera technology for navigation, was demonstrated at ORE Catapult’s Blyth test facility earlier this year.

Another robot, BladeBUG, is looking at turbine blade inspection and surface preparation, as part of repairs. Company founder Chris Cieslak came up with the idea in 2014, while working as a blade turbine engineer. In 2017, he decided to go full time on the idea, supported by ORE Catapult. It’s a six-legged robot, with each leg having its own vacuum cup system to help it creep across and work on blade surfaces. It’s tethered and human operated via a semi-autonomous motion system – the operator uses a joystick to tell is to move forward, back, left or right, and the robot scans the surface to plan how to move its feet.

“It’s designed to be taken offshore so it’s small, compact and lightweight (600mm-wide and long and weighing 20kg). It’s about trying to change the mindset of wind. It’s very reactive, currently. They wait for damage to get severe enough to send out rope access crew. During that period the blade is becoming more inefficient. [with BladeBUG you can] start to see problem and treat it early, potentially preventing cases where you could get a catastrophic defect.”

A common issue is leading edge erosion. This happens when rain hits the blade as it travels at up 200mph, making its smooth profile rough and pitted. This effect then accelerates, says Cieslak. A little like treating a chip in a car windscreen, early treatment can prevent a catastrophic failure.
A lot of the development work has been on the blade walking capability, which was proven on ORE Catapult’s 7MW trials turbine at Blyth. It’s also been developing its capabilities, which include a lightening protection system testing system, and UT inspection, to see any issues unmanned aerial vehicles (UAVs/drones) can’t spot.

“Drones are fantastic for a quick global inspection, to find an area with problems, BladeBUG can then ascertain how serious they are or do the repairs,” says Cieslak. “We’re the next stage follow up inspection and either repair or provide more information to a repair specialist onshore, which means the rope access team can go and there wont be any surprises.”

The next goal is a repair module, to perform cleaning and sanding of areas before treatment. Imagine a power sander moved across the blade surface using the body of the BladeBUG, which has control equivalent to a CNC machine, says Cieslak. A challenge is certification, but that will come, he says.

A future vision is for a fully autonomous tetherless system controlled from shore, working wither turbine to turbine or as resident robots on each turbine, supporting future live online monitoring systems. However, it’s still early days. The company has a number of early adopter trials planned.

A lot of focus has been around using uncrewed surface vessels (USVs). These are already being used regularly for site survey work. A number are trying to deploy underwater robots from USVs. Fugro has already been doing this, for inspection operations using its Blue Essence USVs, with plans for larger vehicles. However, it’s delivering drones or blade crawling robots via USVs that many see as offering a significant opportunity.
The Drone Swarm for Unmanned Inspection of Wind Turbines (Dr-SUIT for short) is aiming to deploy aerial drones for offshore wind farm inspection from USVs is now being led by Airborne Robotics with partners Ocean Infinity, the University of Portsmouth and Bentley Telecom. The group have said they plan to have a system demonstration in 2022.

This follows on the heels of the MIMRee project (Multi-Platform Inspection Maintenance & Repair in Extreme Environments). The vision of the just two-year project, which concluded last year, was for a Thales Halcyon USV to detect blade defects using an onboard camera system able to scan moving blades, developed by Thales during the project. It would then be able to signal the blades to stop and launch a drone able to transport a six-legged ‘blade crawler’ onto them to perform a repair.

“It was a very ambitious forward-thinking approach, trying to see how far we could go on that road map,” says Hamish Macdonald, Project Engineer at ORE Catapult. “In the end, we achieved some what I thought was some really impressive prototype technologies that we could test in representative environments.”

That included landing a drone on the USV, which included developing a global mission planning software that communicated everything to the drone and also the moving turbine camera system – which had just been an idea at the start of the project. A deployment system was developed for the drone to carry a crawler (an early prototype of a BladeBUG was used), but this had to content with weight limitations enforced by the UK’s Civil Aviation Authority (which was reduced to 25Kg during the project).

“We can see there are shortterm opportunities that could be focused on and brought to commercialisation sooner and other considerations more to do with manipulation and repair that are a bit further on,” says Macdonald.

An early win is to perform more drone inspection remotely via USVs, he says, although there are some hurdles around regulations, Maritime Coastguard Agency considerations and licensing on USVs and beyond visual line of sight operations.

“I think wind farm developers are keen to see innovations like this, robotics is an innovation area that’s here to stay and something they want to see robust and commercial enough to be a solution,” says Macdonald. “Seeing projects like MIMRee is really helpful. I think there are aspects that could be realised in the shorter term that they would be keen to explore also.” 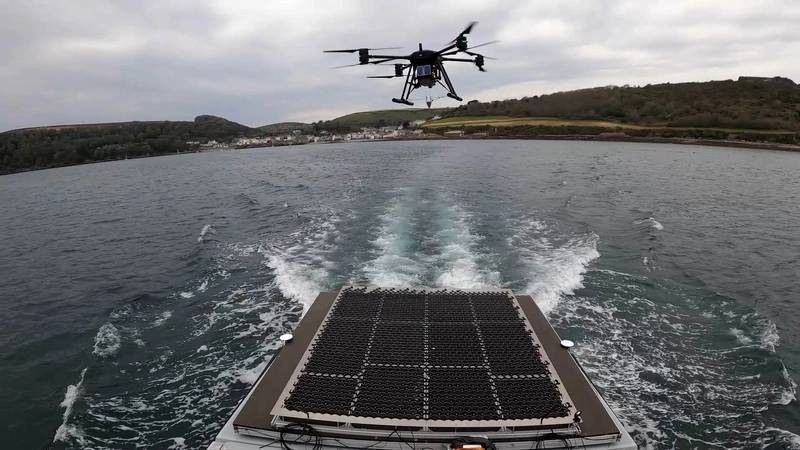 To make all this work, these multiple robots will need communications. A future plan is for each wind farm to have its own communication platform connected to shore and then within the wind farm local wireless connections for the ecosystem of other robots operating in that environment, says Corsar.

“The hub on the farm would provide more than just communications, it would provide the power for the crawlers and low hanging fruit in this space is the UAVs,” he says. “For our platform, it would probably be a low earth satellite link to shore, as it will be more ubiquitous to use sat comms rather than farm by farm basis communications. But it will have bandwidth concerns, so it’s on us to develop control systems that are not required to pass big amounts of data.”

But there’s some way to go yet before this vision is realised. Amphibian has gained traction in the oil and gas sector, despite having been designed for offshore wind. “Oil and gas is very much more mature around integrity management. Offshore wind isn’t quite as mature in inspection requirements and inspection techniques. It’s a younger industry still finding its feet. Equally its assets are younger and not falling to pieces. So there are a number of factors holding us back [in offshore wind].”