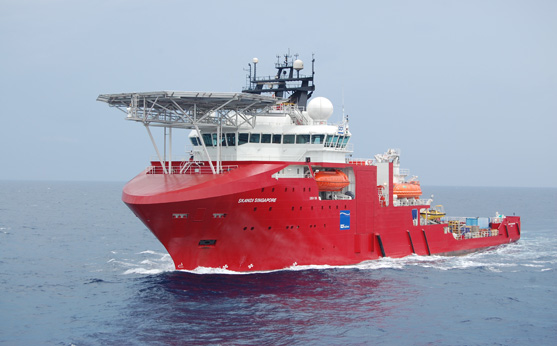 VAALCO in 2021 said it had struck a charter deal with the FSO owner World Carrier Offshore Services Corp for the Cap Diamant, a double-hull crude tanker built in 2001, which will be converted to an FSO for operations at the Etame field.

By deploying the FSO at the field, VAALCO said it would significantly reduce storage and offloading costs by almost 50%, increase effective capacity for storage by over 50%, and extend the field’s life, resulting in a corresponding increase in recovery and reserves at Etame.

DOF Subsea will provide all personnel, crew, and equipment necessary to assist with reconfiguring the Etame field subsea infrastructure to flow field production to the replacement FSO.

Engineering and design work in relation to the field infrastructure upgrade has been completed with subsea work planned to start in July and be completed before the FSO is operational in September 2022, VAALCO said Thursday.

DOF Subsea offshore construction vessel Skandi Hercules will carry out the work. The work scope includes transporting over 5,000 meters of new flexible pipelines from the UK to install in the Etame field; the retrieval and relocation of existing in-field flowlines and umbilicals; and assisting in the connection of new risers to the FSO.

The Skandi Constructor was upgraded in 2021 with a 250-ton AHC crane and outfitted with 2 new XLXc ROV systems and is currently working in Trinidad under multiple contracts managed by DOF Subsea USA performing commissioning and IMR tasks before returning to the North Sea for other commitments in Q2.

George Maxwell, VAALCO’s Chief Executive Officer, commented, “We continue to progress forward with our field reconfiguration and FSO conversion at Etame, on time and within the capital guidance we previously provided. The FSO increases effective storage capacity by over 50% and reduces costs by almost 50% compared to the current FPSO. “

“This project will significantly improve our margins, enhance our cash flow generation and sustain our operational excellence and robust financial performance at Etame through 2030. We are delivering on our strategic plan with the FSO conversion, our drilling campaign at Etame and continued evaluation of organic and inorganic opportunities.”