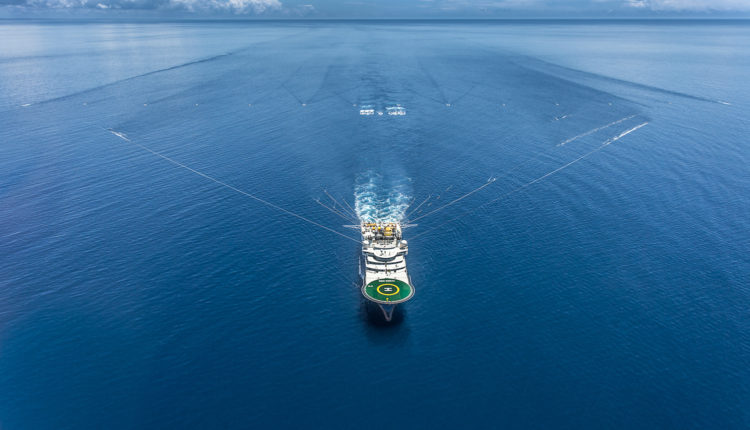 (PetroleoHoje) During the second half of this year, the companies Spectrum Geo, CGG and TGS submitted to Ibama six projects for the acquisition of seismic data in the Pelotas, Santos, Campos, Espírito Santo and Barreirinhas basins, estimated to start between 2021 and 2023.

Acquired by TGS in 2019, Spectrum Geo intends to acquire 114,26 thousand km² of 3D seismic data in the Pelotas Basin, with a minimum distance of 101 km from the municipality of Laguna, in Santa Catarina. The acquisition will be divided into four phases, scheduled to start in June 2022 and last for one year. Three ships will participate in the activities, one of them being the source vessel.

The other TGS project was submitted to IBAMA in June this year and foresees the acquisition of 55,900 km² in the Santos Basin, estimated to start in December 2021 and end in December 2023. The 3D seismic acquisition with nodes will be carried out in five consecutive phases:

TGS will use the Port of Rio de Janeiro (RJ) as a support base, with four ships participating in the operation, two of which are source and reception vessels.

In the second half of 2021, CGG started the environmental licensing process for four acquisitions in Brazil. The most recent date of August and foresees the acquisition of 3D seismic data of approximately 35 thousand km² in the Barreirinhas Basin. The project, which is an extension of the Megabar seismic survey, is expected to start in January 2023 and has an estimated duration of 630 days, using a total of three vessels.

The company will use the ports of Belém (PA), Pecém (CE), Mucuri (CE) and Itaqui (MA) as support bases, with a forecast of three monthly trips.

The other project, entitled Jabuticaba, foresees the 3D acquisition with nodes in the Santos and Campos basins. The activity will cover three separate acquisition areas, totaling more than 40,000 km², scheduled to start in June 2022, March 2023 and February 2024. Four vessels will be used, with the ports of São Sebastião (SP), Niterói (RJ) ) and Rio de Janeiro (RJ) as support bases.

The Açaí acquisition will cover two separate areas, totaling approximately 28.4 km² in the Espírito Santo Basin. The 3D seismic survey with nodes is scheduled to start in November 2022, with the ports of Rio de Janeiro (RJ), Niterói (RJ) and Vitória (ES) as support bases. Source, ROV and support vessels will be used.

Also from CGG, the Pitanga project foresees the acquisition of 3D data with nodes in the Campos Basin. The acquisition area is approximately 3.3 thousand km², expected to start in April 2023 and last for 180 days. The ports of Niterói (RJ) and Rio de Janeiro (RJ) will be the support bases. The company plans to use four vessels, one source and one receiver, in addition to ROV and support.