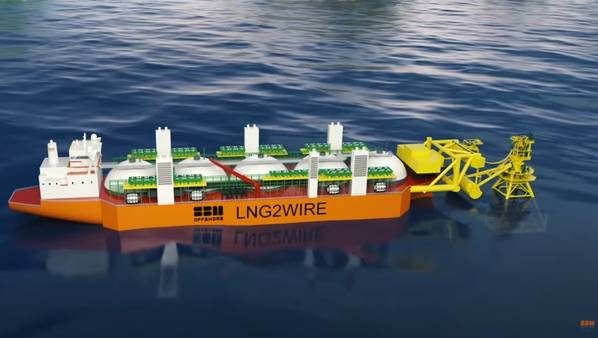 SBM Offshore, one of the world’s largest suppliers of floating, production, storage, and offloading (FPSO) vessels for the offshore oil industry, is looking at ways to diversify its offering, with a more dominant role predicted for gas in the future.

The company, which has the ambition to have 25% of revenues from Gas & Renewables by 2030, has this week launched a video showcasing its LNG2Wire offshore facility concept.

According to the Dutch company, its LNG2Wire floating facility can produce and supply high-voltage power from LNG, seen as one of the cleanest fossil fuels.

The facility’s ship-shape will enable it to be deployed anywhere in the world as needed. Per SBM Offshore, the LNG2Wire floater can be built by converting an existing LNG tanker or building a new LNG hull.

LNG2Wire solution is designed to provide electrification to remote locations and is also aimed at large industrial consumers contemplating a switch to greener power.

Per SBM Offshore, demand for LNG-produced electricity is driving the market for near-shore LNG to power solutions, which have significant advantages over traditional onshore gas-fired plants including low-to-zero land acquisition costs, shorter plant delivery schedules, and flexibility in relocating to other sites.

The floating power plant would be able to be moored at a jetty or nearshore via a single-point mooring system.

Watch the video below for more details: