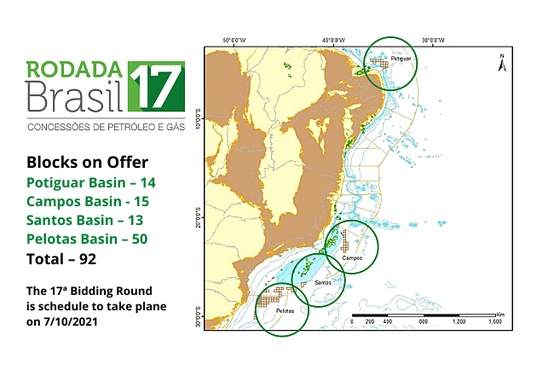 (Valor) The inclusion of blocks in the Potiguar and Pelotas basins in the 17th Round of the ANP, scheduled for Oct 7th, puts into discussion the environmental licensing of areas considered sensitive to oil activity. Under debate is the possibility of carrying out the licensing in advance or, at least, redeeming the assessment instrument that does not replace it, but gives greater security to the auctions. Even the Federal Court of Accounts (TCU) has already entered the controversy.

— The discussion gained momentum after experts warned of risks that oil activity in the Potiguar Basin could pose to the Atol das Rocas and the Fernando de Noronha archipelago, respectively 260 km and 370 km from the points where platforms may be installed in the future.

— The controversy raises two questions: whether the government can withdraw part of the blocks from the auction and whether injunctions will emerge to stop it. The ANP is ready to cancel any injunctions.

— The Potiguar and Pelotas basins do not have in-depth environmental studies, the Environmental Assessments of Sedimentary Areas (EASAs). In Brazil, only two basins have this: Sergipe-Alagoas-Jacuípe and Solimões, says lawyer Antônio Augusto Reis, a partner at Mattos Filho and a specialist in environmental law.

— The absence of EASAs, he says, is not an impediment to putting areas up for auction: an inter-ministerial decree (198/2012) guarantees that, even without the studies, blocks of sedimentary basins can be auctioned with a joint guarantee from the Ministries of Mines and Energy (MME) and Environment (MA). But this is a more superficial analysis.

— TCU pointed out weaknesses in this preliminary environmental analysis. In the analysis of the tender, the technical unit (SeinfraPetroleo) and the plenary of the court even mentioned excerpts from the technical manifestation of the Chico Mendes Institute for Biodiversity Conservation (ICMBio). The environmental agency classifies as “reckless” the offer of blocks allocated to the two preservation areas in competition.

— The environmental uncertainty caused the National Association of Petroleum Minority Shareholders (Anapetro) to ask the Brazilian Securities Commission (CVM) to open a process to investigate the state’s interest in environmentally sensitive blocks that will be offered in the 17th Round of ANP.

— For Anapetro, the eventual auction of blocks in environmentally sensitive areas included in the auction may generate legal uncertainty and the possibility of denial of exploration licenses