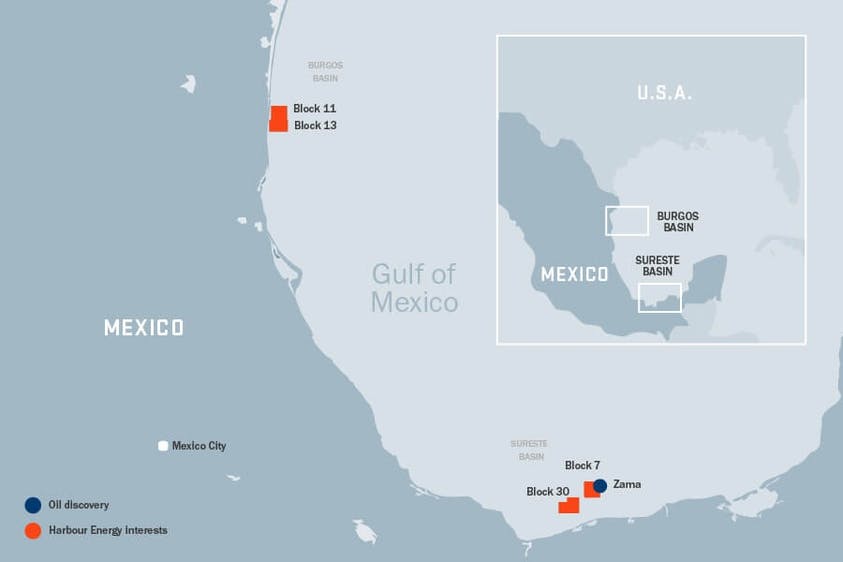 Harbour Energy will exit its exploration license interests in the Ceará basin off northeast Brazil and in the Burgos basin offshore Mexico.

The company, formed last year from the merger between Chrysaor and Premier Oil, said its exploration strategy was to focus mainly on infrastructure-led, lower risk opportunities in areas where the company already has a producing presence.

But Harbour is committed to Mexico’s offshore block 30, where the partners plan to drill two commitment wells next year targeting the Wahoo and Pike prospects.

In Southeast Asia, demand has been strong from Singapore for gas from the company’s Natuna Sea block A fields offshore Indonesia, with offtake under two gas sales agreements above take or pay levels.

A jackup rig campaign has started, comprising a workover and an infill well to boost gas delivery.  Elsewhere off Indonesia, the second of a two-well appraisal program on the Tuna discoveries (Harbour 50%) is currently drilling, and preparations are under way for the Timpan-1 exploration well on the operated Andaman II license during the first half of 2022.

As for non-operated activities in the UK North Sea, development drilling continues on the Storr-2 well, which will be tied into APA’s Beryl Alpha platform.

Buzzard Phase 2, CNOOC is developing as a subsea tieback to the main Buzzard platform, should deliver first production around year end.

The EIG well in the TotalEnergies-operated Elgin-Franklin area, which started drilling last December, should be tied into production during 4Q.

And at the bp-operated Clair Ridge platform west of Shetland, two further production wells have been brought onstream.