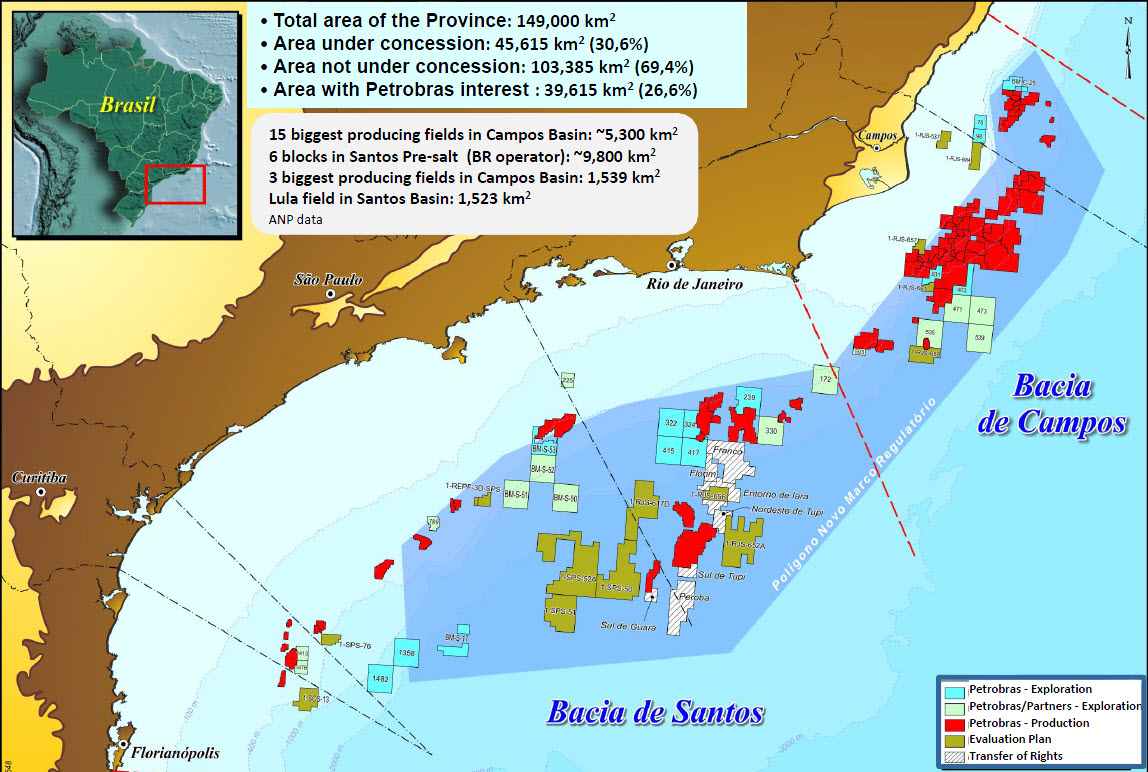 The Program for the Improvement of Oil and Natural Gas Exploration and Production Tenders (BidSIM) came to the conclusion that it is “urgent” to change the law to allow the concession regime within the so-called pre-salt polygon . According to the final reports of the program, the measure is necessary to increase the attractiveness of investments for the oil and gas sector in the country. The documents were published in recent days by the federal government and bring an analysis of possible new areas that may be offered in future auctions. BidSIM’s work assessed that, in light of current knowledge, the studies point to a single area with relatively low exploratory risk, located in the Upper External Area of ​​the Santos Basin. Meanwhile, the remaining areas of the Santos Basin pre-salt area and the entire Campos Basin present “medium or high exploratory risk”. Therefore, the change in the law to auction areas of the pre-salt polygon under the concession regime would be a way to increase the attractiveness of these projects.

The BidSIM reports point out that there is still a vast area within the pre-salt polygon without any forecast in future rounds. This is because in the current model for blocks in this region, the sharing model, the Union must determine a fixed signature bonus and a minimum oil surplus percentage. These two values ​​are estimated from simulations on a hypothetical exploration and production project for the mapped prospect. Thus, the adopted methodology demands a real expectation of at least one robust and viable production project for each area offered.

“It just so happens that practically the entire pre-salt area, and a good part of the Campos and Santos basins, now has good quality 3D seismic, and the maps resulting from the interpretation of this data show us, with an excellent degree of confidence, that all large structures with low geological risk in the pre-salt area have already been contracted”, detailed the BidSIM report. According to the document, future exploratory opportunities in pre-salt play that have not yet been contracted are of “small prospective volume or high exploratory risk”.

Even so, the government assesses that there is still an attractive potential for exploration in the post-salt horizons within the non-contracted areas of the pre-salt polygon, with more modest volumes and considerable exploratory risk. “Therefore, while the production of the Campos Basin shows a high decline, negatively impacting the collection of Government Participations, taxes and job creation, Brazil is facing great difficulties to offer new blocks for post-salt exploration within the Pre-salt in the Campos and Santos basins, due to limitations arising from Law No. 12,351/2010”, explained BidSIM.

As the market is already aware, Law No. 12,351/2010 imposes that the exploration and production of oil and natural gas in the pre-salt area or in areas considered “strategic” can only be auctioned by the Union under the regime of production sharing. “For all the reasons set out in this chapter, legal changes that make it possible to contract the concession regime within the Pre-salt polygon are urgent, in order to maintain the production of the Brazilian post-salt, which is currently in sharp decline ”, concluded the BidSIM.

Such a change in the law will depend on the evaluation and approval of the National Congress. Currently, there are two bills in the legislative houses that deal with the flexibility of the sharing regime in the pre-salt polygon. The first of them is bill 3178/2019, authored by senator José Serra. The second proposal, bill 5.007/2020, is authored by federal deputy Paulo Ganime.

BidSIM was created in April of last year, aiming to increase the attractiveness of the areas to be offered in the bidding rounds for the exploration and production of oil and natural gas in Brazil. An inter-ministerial committee was created to manage the program and was composed of members from the Ministry of Mines and Energy, the Civil House of the Presidency of the Republic, the Ministry of Economy and the National Petroleum Agency (ANP).

Last week, during the launch of the 2021 Oil Yearbook, prepared by Firjan, the Minister of Mines and Energy, Bento Albuquerque, defended the flexibility of the contract model in the pre-salt polygon. “We worked with the National Congress to modernize our regulatory framework for oil and gas exploration and production. A necessary measure is the flexibility of contracting regimes in the pre-salt area, with the possibility of unlocking large investments”, he said. During the speech at the event, he did not get to detail the numbers of planned investments.