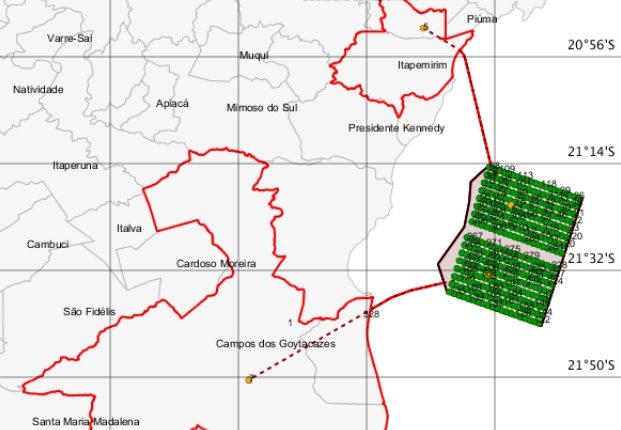 (PetroleoHoje) IBAMA released the map showing the location of offshore wind energy generation projects that are in the licensing process. Of the 23 projects, only one belongs to an oil company. It is the Aracatu wind farm, owned by Equinor, which will have a generation capacity of 4 GW.

The project consists of 320 wind turbines (160 per farm), each with a capacity of 12 MW to 16 MW and mounted on a Monopile foundation, with a hub height at 136 meters above sea level and a rotor diameter of 220 meters. The distance from the coast is only 20 km.

In partnership with British BP, it is developing the wind farms Empire Wind, with a total capacity of 2.1 GW (Empire Wind I and Empire Wind 2), and Beacon Wind, in New Tork (USA), with 1.2 GW.

The first solar plant in Equinor’s global portfolio is in Brazil: the SolarApodi Complex, in Ceará, with a capacity of 162 MW. The company also has plans to develop a 480 MW solar plant in Rio Grande do Norte and another in the north of Rio de Janeiro, at Porto do Açu, in 2022. In Pernambuco, Equinor and its partners, Scatece and Kroma Energia, plan the São Pedro e Paulo project, with a total capacity of 101 MW, still in 2021.

TotalEnergies, in turn, has three solar plants, located in Dracena, in the state of São Paulo, and in Bom Jesus da Lapa, in Bahia, with 140 MWp in operation. In addition to the solar plants in operation, TotalEren has 160 MW of wind power plants under construction – the Terra Santa (92.3 MW) and Maral (67.5 MW) projects in the state of Rio Grande do Norte.

Shell already announced its first solar energy project in Brazil. According to the cooperation agreement signed with Gerdau, the Aquarii photovoltaic park, which will be installed in Brasilândia de Minas (MG), will supply energy for the steel factories of the Brazilian steel company and for sale in the free market through the energy trader of IOC, Shell Energy Brasil, as of 2024.