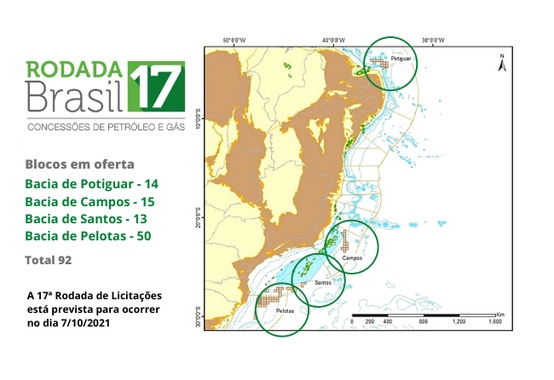 The ANP published the notice and concession contract model for the 17th Bidding Round, which contain, respectively, the rules and procedures of the round and the rights and obligations of future concessionaires. This round is scheduled to take place on October 7, with the offer of 92 blocks with exploratory risk, with a total area of ​​53,93 thousand km². The blocks are located in 11 sectors with high potential and new frontiers in four Brazilian offshore sedimentary basins: Campos, in Rio de Janeiro; Pelotas, in Rio Grande do Sul; Potiguar, in Rio Grande do Norte and Santos, in São Paulo. The ANP informed that both the notice and the contract model were subject to public consultation and hearing. The contributions received from the market and society were appreciated by the ANP and those considered relevant were used to improve the bidding instruments.

The final versions of the documents were also approved by the ANP board and by the deadline stipulated by the Federal Court of Accounts (TCU). Among the main innovations in the notice and in the 17th Round’s contract model in relation to previous auctions is the offer of three exploratory blocks, located in the SS-AUP5 sector of the Santos Basin, which are cut by the limit of 200 nautical miles. The concession contract for these blocks will contain a provision for the payment of amounts owed to the International Seabed Authority (ISA), pursuant to article 82 of the United Nations Convention on the Law of the Sea (UNCLOS), and a decreasing royalty rate , from the 6th year of production, until reaching a rate of 5% from the 10th year of production. In the concession contract model, the revision of the confidentiality clause, eliminating the need to request consent from the ANP for the disclosure of still confidential data and information and allowing the alignment of contractual provisions with current regulations. See more information on the 17th Round page: http://rodadas.anp.gov.br/pt/17-rodada-licitacao. The documents can be accessed on the round page (http://rodadas.anp.gov.br/pt/17-rodada-licitacao/edital-contrato),