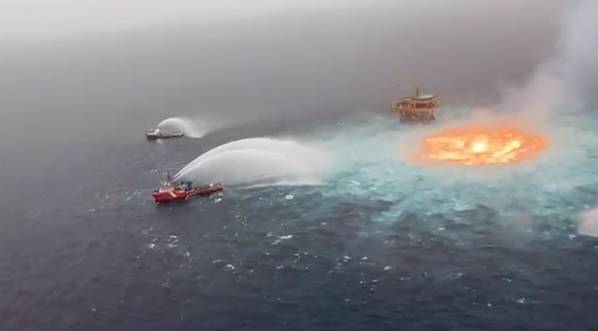 Just days after a video of a massive ocean surface blaze near a Pemex oil platform in the Gulf of Mexico went viral, Mexico’s national oil company has declared that environmental damage was avoided due to quick action by its workers.

The July 2 blaze, caught on video apparently from a nearby helicopter, showed bright orange flames jumping out of the water as the fire raged a short distance from the oil platform. Pemex has previously said it took more than five hours to fully extinguish the fire.

“There was no oil spill and the immediate action taken to control the surface fire avoided environmental damage,” the company said in a statement on Monday.

The statement added that the blaze was sparked by an electric storm that ignited a leak of gas from a busted underwater pipeline.

The fire ignited a storm of criticism over the weekend, including social media posts from climate activist Greta Thunberg and New York Mayor Bill de Blasio, among many others.

The fire took place at the top producing offshore oilfield operated by Pemex, which has a long track record of major industrial accidents at its facilities.

Gusatvo Alanis, a board member with Mexico’s environmental law center CEMDA, told Reuters he thinks it is much too soon to conclude that the fire caused no environmental damage.

Pemex should commit to preparing an “detailed study of the (environmental) impact caused by the fire” as well as a plan to repair the damage, according to a statement issued earlier on Monday and signed by more than two dozen environmental groups, including Greenpeace as well as CEMDA.

In its statement, the state-run Pemex only committed to investigating the cause of the pipeline gas leak.